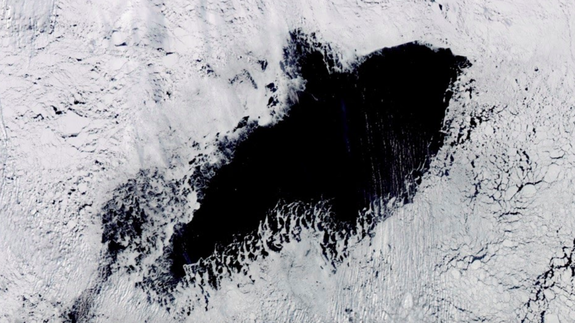 It’s a strange thing. In the dead of the subzero Antarctic winter, when the oceans at the bottom of the world are frozen over, scientists have observed massive holes the size of South Carolina or larger opening up in the sea ice.

The rare, puzzling phenomena occurred most recently in the winters of 2016 and 2017, though considerably larger holes opened up in the 1970s. Now, scientists have a good grasp of why such great holes, known as polynyas (Russian for “hole in the ice”), form.

A slew of environmental factors must come together at the same time for the great ice voids to open up. The research, published Monday in the journal Nature, used observations taken from big floats in the remote ocean, NASA satellites, and even sensors attached to the heads of elephant seals to show how the ocean under the ice gets mixed up, like a bartender shaking up a cocktail. Ultimately, this mixing transports relatively warmer water up to the surface. Read more…

Source: https://mashable.com/article/antarctica-holes-ice-polynya-explained/
Droolin’ Dog sniffed out this story and shared it with you.
The Article Was Written/Published By: Mark Kaufman