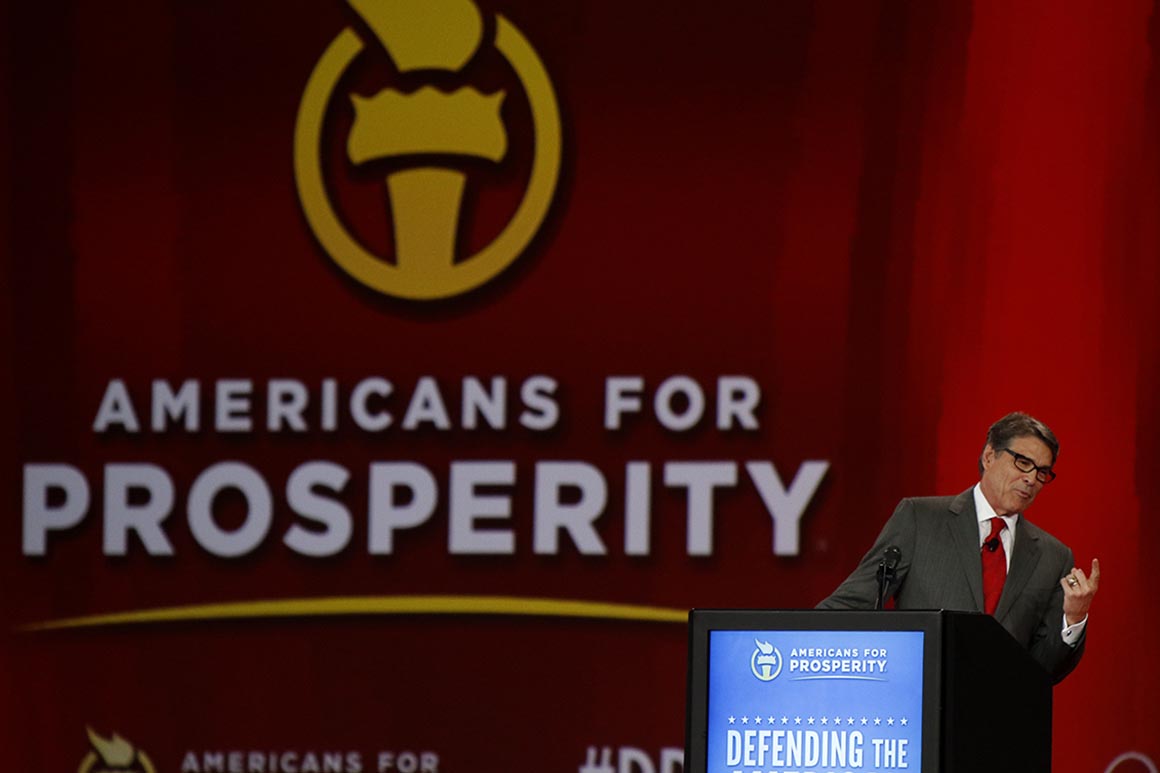 The Koch network is shaking up how it tries to influence Washington heading into 2020, starting with plans to spend money to reelect lawmakers from either party who back its issues and are facing primary challenges.

Once a pro-Republican electoral powerhouse, the network that was long led by Charles and David Koch has made major changes to the way it operates in recent years, focusing more on policy and philanthropy and even renaming itself Stand Together to reflect its less political tone. As part of this transition, Americans for Prosperity, the policy and political arm of the network, is retooling for the 2020 election cycle.

Some — but definitely not all — of the group’s policy plans may intrigue Democrats. For instance, one of the Koch network’s top priorities is extending protection to Dreamers; its stance on that issue has sometimes been met with pushback from its own donors. Under its new approach, the network says it will help defend incumbent lawmakers in primaries, encouraging lawmakers to be less risk-averse and work together on Koch-backed policies.

The moves are designed to enable the network to further its priorities and, in the words of a new memo, “elevate civil discourse” in Washington and elsewhere. The network will also start four new PACs focused on policy issues to reward lawmakers that are in step with Koch policy. Though the network has changed, it still has the ability to pour millions into television ads and knock on thousands of doors to help candidates, in addition to donating directly to their campaigns.

“We expect policymakers to unite people and build coalitions. We’re committed to forging a new way forward with political discourse,” said Emily Seidel, CEO of Americans for Prosperity, said in an interview. “We’re excited for how this new approach will help policymakers work together.”

The approach is a far cry from the years when the brothers helmed a constellation of groups that bolstered the anti-establishment tea party movement, earning the Koch brothers status as Republican super villains among the left and good-government reformers.

But especially since Donald Trump’s nomination as the Republican candidate during the 2016 elections — which the network did not support — the Kochs have been shifting their focus. Charles Koch’s son, Chase, who is expected to lead the network when his 83-year-old father eventually departs, is uninterested in partisan politics. And the network has, at least for now, turned away from presidential politics: The network is not spending money to help reelect Trump, who Charles Koch has publicly criticized in the past, in 2020.

The network has not said how much money it will spend to bolster its political and policy goals during the 2020 election cycle. That will depend on whether priorities outlined by the network are getting done, Seidel said.

“I would love to come back and tell you we are increasing our investment, because that means government is actually working and getting things accomplished,” Seidel said.

“AFP and AFP Action’s advocacy efforts will lead with a positive vision and focus on the issues,” the memo says. “Going forward, we will expect the same of candidates we support politically. … If candidates engage in personal, ad hominem attacks and other divisive tactics during their election, it makes it difficult for them to work productively with others after the election.”

Though some of its plans may appeal to Democrats, when it comes to the network’s long-standing desires to cut spending and slash the size of the federal government, the Koch network is unlikely to find much Democratic support. It also helped successfully push for tax reform during the early days of Trump’s presidency and has advocated for environmental deregulation that incenses the left.

Only rarely has the Koch network involved itself in primary battles in the past, and typically in extraordinary circumstances. It spent money to help then-Rep. Mike Pompeo — who represents the Koch Industries headquarters region in Wichita, Kansas — beat back a challenge from his predecessor in Congress, who tried to run for his old seat. Koch groups also spent to defeat then-Rep. Renee Ellmers in a member-vs.-member primary during the 2016 elections, citing the North Carolina congresswoman’s record on government spending as its cause.

But North Dakota Sen. Heidi Heitkamp, a Democrat, was an early test case for the Koch’s bipartisan approach to election spending during the general 2018 elections: After she voted in favor of a bill relaxing some financial regulations in the Dodd-Frank law, the network ran digital advertisements in Heitkamp’s favor. It later decided to eschew supporting Heitkamp’s Republican opponent in the race, then-Rep. Kevin Cramer, saying he was insufficiently supportive of Koch priorities like free trade — saving Heitkamp from artillery in the form of what could have been millions of dollars worth of television ads and other election spending.

Asked whether she planned to seek the Koch’s endorsement in the race, which she ultimately lost to Cramer, Heitkamp told POLITICO she did not.

Source: https://www.politico.com/story/2019/06/07/koch-network-gives-bipartisanship-a-chance-1356571
Droolin’ Dog sniffed out this story and shared it with you.
The Article Was Written/Published By: mseverns@politico.com (Maggie Severns)