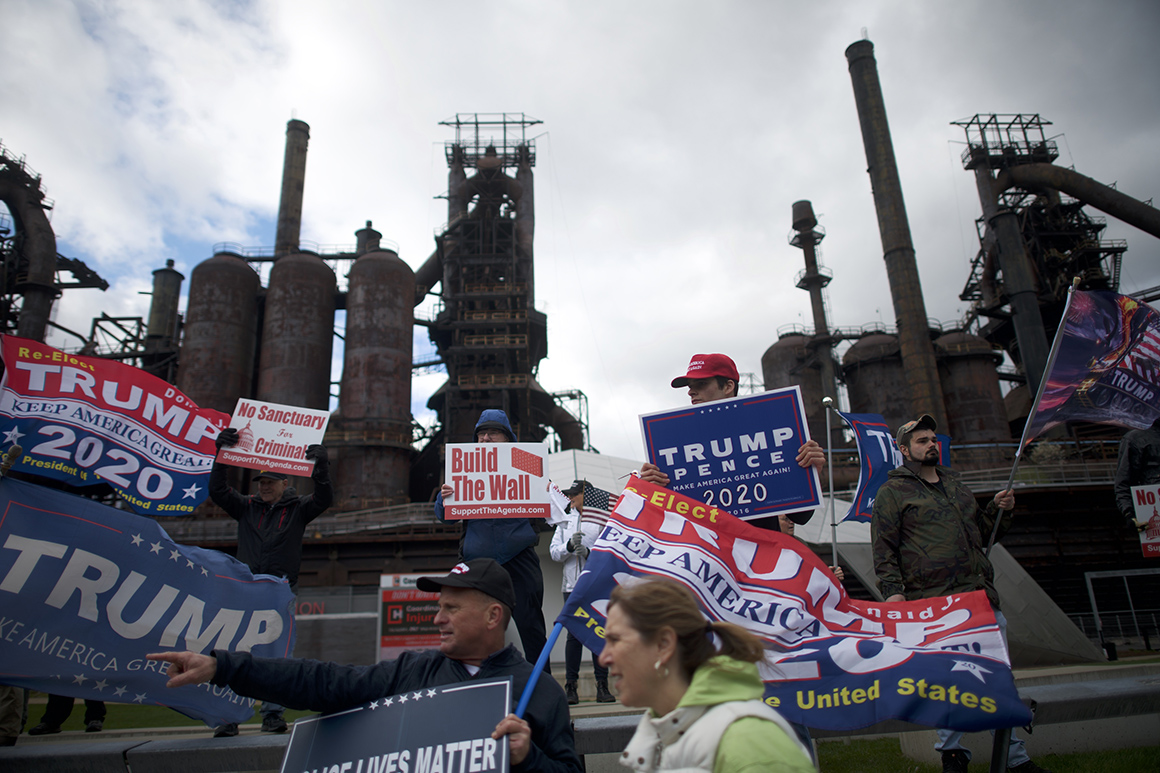 Donald Trump’s aides and allies are moving aggressively to shore up his support in three Rust Belt states that propelled him to the presidency — but where his own polling shows him in trouble heading into 2020.

Trump will travel to Pennsylvania Monday for a rally that comes after recent visits to Wisconsin and Michigan, two other states at the center of his reelection strategy. Those appearances are just the most public display of his team’s efforts to fortify his standing.

Behind the scenes, they’ve rushed to the aid of languishing state Republican Party machines and have raised concerns that a potential GOP Senate candidate in Michigan could hurt the president’s prospects there. They are also scrutinizing the map for opportunities to fire up his base in the trio of states.

The moves come at a time of growing anxiety over the geographic linchpin of his 2020 hopes. The Trump campaign recently completed a 17-state polling project that concluded the president trails Joe Biden in Pennsylvania, Wisconsin, and Michigan, according to two people briefed on the results. America First Action, the principal pro-Trump super PAC, is expected to conduct its own polling and focus groups in Pennsylvania and Michigan later this summer.

People close to the president insist they’re not panicked. They think Biden’s numbers will drop once the honeymoon stage of his campaign wears off. Earlier this month, the president convened his top advisers, including campaign manager Brad Parscale, Republican National Committee Chairwoman Ronna McDaniel, and Jared Kushner for a dinner focused on 2020 that was described as an upbeat affair.

Yet there’s nagging concern after a midterm election in which Republicans across the Midwest got clobbered — and as Trump’s trade war is threatening farmers and factory workers who helped put him in office.

The president won each state by less than 1 percentage point in 2016.

“The fact that the president and vice president are frequent travelers to Michigan — I think that shows that everyone gets the math,” said former Michigan Attorney General Bill Schuette, a Trump supporter who recently joined the president for a rally in Grand Rapids. “Do the math: you’ve got to carry a state like a Michigan, a Wisconsin, a Pennsylvania.”

Wisconsin is also getting special attention from the campaign.

Former Trump White House chief of staff and ex-state GOP chairman Reince Priebus was among those who pushed for a post-midterm study to assess what went wrong for the GOP. It resulted in a scalding, 15-page autopsy concluding that the Wisconsin Republican Party had “drifted from its roots as a grassroots organization and became a top-down bureaucracy, disconnected from local activists, recklessly reliant on outside consultants and took for granted money that was raised to keep the party functioning properly.”

To fix the financial woes, the report said, “we need to understand the missteps fully and put a ﬂag in the ground to say ‘this ends now.’”

Released last week, the autopsy followed a brutal midterm election that saw Republicans lose the governorship, traditionally a key organizational and financial asset in presidential elections. The report detailed a series of steps the state party needs to take ahead of 2020.

Priebus, who still speaks with the president, is expected to brief major contributors on the report next month in Milwaukee. Efforts are already underway to pay off the party’s post-midterm debt: Republican mega-donor Diane Hendricks, a Trump 2016 fundraising committee vice chair, recently gave the state party $500,000, two people familiar with the donation confirmed.

“At its core, we did the autopsy because 2018 didn’t go the way we wanted it to go,” said Wisconsin GOP Chairman Andrew Hitt, an attorney for Trump’s 2016 campaign. “It really became clear that some things just fundamentally didn’t go right and so we wanted take a deep dive and look at them and correct them.”

Trump advisers, meanwhile, are on alert for anything else that might diminish the president’s prospects in the state — including, they worry, a Senate bid by Iraq war veteran John James.

Republican Senate leaders are aggressively courting the rising GOP star to challenge Democratic Sen. Gary Peters. But Trump aides have warned Senate GOP officials that a statewide campaign by James could force Democrats to spend more money in the state, driving turnout on the other side and potentially hurting the president. The Trump team has argued they think it would be safer for James to run for a House seat.

James has met with Trump and Vice President Mike Pence in recent weeks to discuss his options.

In Pennsylvania, where Republicans have been mired in turmoil and infighting since the midterms, Trump campaign officials traveled to the state capital last month to discuss turnout and field plans with state party leaders.

The Trump team deliberately chose Pennsylvania’s Lycoming County for Monday’s rally, where the president will campaign with a Republican heavily favored to win a special House election this week. Trump won nearly 70 percent of the vote there in 2016, and his advisers hope to mobilize his hardcore supporters well ahead of the general election season.

Pence has embarked on his own foray into the Rust Belt, flying to Michigan in April and doing a multi-stop tour in Wisconsin last week. He’s slated to headline a fundraiser for the Pennsylvania GOP in Hershey next month.

Pence, the former Indiana governor, is focusing on trade during his travels, visiting manufacturing plants and farms. He has reported back to the president on concerns he’s heard from workers about tariffs.

Despite the concern about Trump’s Rust Belt standing, his supporters insist the president’s appeal to blue-collar workers remains strong.

Lou Barletta, a former Pennsylvania congressman who’s expected to attend the Monday rally, argued that polling understates the president’s popularity — just as it did in 2016.

“If people haven’t learned anything from the last election,” said Barletta, “they’re going to get burned again.”

Source: https://www.politico.com/story/2019/05/20/trump-2020-rust-belt-joe-biden-1332973
Droolin’ Dog sniffed out this story and shared it with you.
The Article Was Written/Published By: aisenstadt@politico.com (Alex Isenstadt)