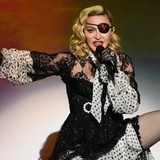 Madonna has released another new single from her upcoming album Madame X called “Future.” While it unfortunately doesn’t feature the rapper of its namesake, the track includes a guest verse from another Atlanta native: Migos’ Quavo. This turn toward hip-hop isn’t completely new for Madonna, who last week released another single called “Crave” with Rae…

Source: https://www.spin.com/2019/05/madonna-future-ft-quavo/
Indie Brew found this story and shared it with you.
The Article Was Written/Published By: Rob Arcand