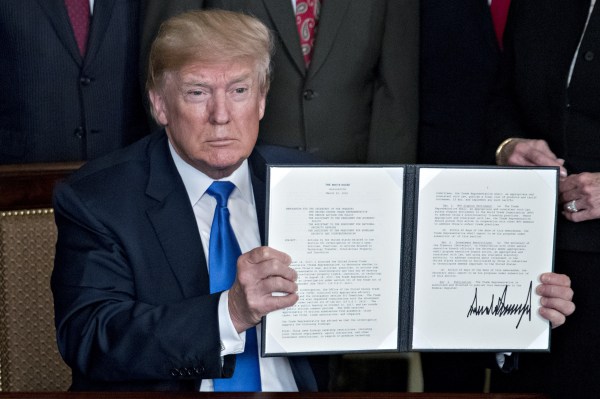 President Donald Trump has declared a national emergency to “deal with the threat posed by the unrestricted acquisition or use in the United States of information and communications technology… supplied by persons owned by, controlled by, or subject to the jurisdiction or direction of foreign adversaries.”

Reports that the President would sign the executive order were circulating last night, and, as reported, it’s clear that China is the main target for U.S. concerns — even as the two nations continue to escalate their trade war.

While the U.S. has already restricted government contractors and federal agencies from using technology supplied by Huawei or its subsidiaries, this new Executive Order gives Commerce Secretary Wilbur Ross and other federal agencies broad powers of oversight and approval over private company transactions.

The President had been considering using the 1977 International Emergency Economic Powers Act, which gives the President broad powers to regulate commerce during a national emergency, since at least last May, when The Wall Street Journal first reported the potential for executive action.

The U.S. Justice Department has issued an unprecedented string of indictments against Chinese hackers since last September in addition to specifically targeting companies like ZTE and Huawei, which the U.S. has also accused of spying for the Chinese government.

As my colleague Catherine Shu wrote:

House committee first labeled Huawei and ZTE as national security threats in 2012, accusations they have repeatedly denied. U.S. government agencies and contractors have been banned from using Huawei equipment since last year.

Huawei has come under even more scrutiny during the trade war, with Chinese officials accusing the U.S. of using Huawei as a bargaining chip. Chief financial officer Meng Wanzhou, the daughter of Huawei founder and CEO Ren Zhengfei, was arrested last year in Canada at the behest of the U.S. government and faces up to 30 years in prison on accusations of fraud. U.S. federal prosecutors have also charged Huawei with stealing trade secrets from T-Mobile.

The Secretary of Commerce has 150 days to come up with an enforcement regime and name the technologies or companies that could be barred from the U.S. under the Executive Order.

Republican appointees at the Federal Communications Commission applauded the measure. “President Trump’s decision sends a clear message that the U.S. will do what it takes to secure our communications networks,” wrote FCC Commissioner Brendan Carr in a statement. “The Executive Order will help ensure that our foreign adversaries do not compromise the security of our networks or undermine our core values, including our freedom from unlawful surveillance and respect for intellectual property.”

Meanwhile, it’s likely that rural communities whose cable operators rely on low cost Chinese equipment to build and maintain high speed internet networks will be the hardest hit by the decision to ban foreign products from telecommunications networks.

Responding to an FCC proposal that would ban subsidies to carriers that use Huawei equipment, a group of telecommunications associations said that carriers would “have to spend millions of dollars — and in some cases, more than $100 million — on just the immediate costs of ripping up and replacing equipment.”

Those associations, including the Competitive Carriers Association, rural broadband association NTCA, the Computer & Communications Industry Association, and broadband providers association ITTA went on to add that “carriers that chose ‘the most cost-effective option’ available to them at the time of purchase will be forced to rebuild their networks at a cost substantially greater than they spent to build the networks in the first place.”

Source: https://techcrunch.com/2019/05/15/trump-declares-national-emergency-to-protect-u-s-networks-from-foreign-espionage/?utm_source=feedburner&utm_medium=feed&utm_campaign=Feed%3A+Techcrunch+%28TechCrunch%29
Droolin’ Dog sniffed out this story and shared it with you.
The Article Was Written/Published By: Jonathan Shieber