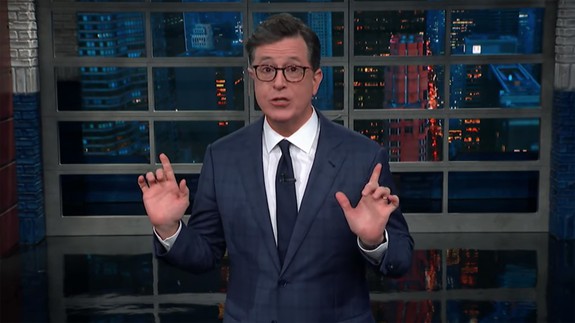 Stephen Colbert’s latest monologue is — you guessed it — all about Trump’s ongoing trade war/”squabble” with China.

But before he broke it all down, he got in a quick Game of Thrones-themed dig.

“Yes, it was a must-see television event,” Colbert says, mimicking a recent Trump speech in which the president spoke about November 2016. “Everybody tuned in to see me ride my dragon and burn Washington to the ground.”

Colbert’s referring, of course, to the events in last Sunday’s Game of Thrones episode.

“I’m telling you, I don’t know why people complained,” he continues. “The writers had been hinting all season that that’s how we were gonna wrap up democracy.” Read more… Source: https://mashable.com/video/stephen-colbert-compares-trump-daenerys/
Indie Brew found this story and shared it with you.
The Article Was Written/Published By: Sam Haysom