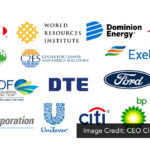 A new coalition of big environmental groups and big corporations have teamed up to push for what they’re calling “a market-based solution” to the climate crisis.

Many of its members formerly sat as members of a group with a similar mission, the U.S. Climate Action Partnership (USCAP). CAP, which lasted from 2006-2010, pushed a major climate bill opposed by progressives during the Obama-era. Its efforts—pushing a bill which did not pass and which may have actually worsened the climate crisis even if it did—arguably set back taking serious action on climate change by a decade, locking in worsening climate impacts as a result.

Calling itself the CEO Climate Dialogue, the group’s launch comes as the progressive activists have come out in support of a Green New Deal, which aims to get the United States to net-zero greenhouse gas emissions by 2050 and create millions of jobs in the process.

The CEO Climate Dialogue, by contrast, says on its website that it aims to reduce greenhouse gas emissions 80 percent by 2050. Its corporate members include fossil fuel companies such as BP, Shell, Dominion Energy, Dupont, Dow Chemical, Pacific Gas and Electric. Other companies have joined on, as well, such as Citibank and Ford Motors. They are joined by environmental groups such as the Environmental Defense Fund (EDF), World Resources Institute, The Nature Conservancy and the Center for Climate and Energy Solutions.

In its press release announcing the group’s formation, the CEO Climate Dialogue called for the passage of federal climate legislation “as soon as possible.” Their plan calls for a carbon tax, which oil companies such as ExxonMobil have supported in the past. The CEO Climate Dialogue says in the press release that a carbon tax “the best way to use the power of the market to achieve carbon reduction goals in a simple, coherent and efficient manner,” adding in the press release that “Markets will also spur innovation and create and preserve quality jobs in a growing low-carbon economy.”

Like USCAP, CEO Climate Dialogue came together via the Meridian Institute. Meridian also served a mediator for USCAP, “including facilitating all policy negotiations of USCAP’s staff-level steering committee as well as its CEO-level board.”

USCAP’s efforts culminated in the 2009 introduction and eventual passage in the U.S. House of Representatives of a market-based cap-and-trade bill. Though it passed it the House, it never received a Senate vote. USCAP’s efforts faced criticism from more progressive environmental groups at the time, such as Friends of the Earth and Greenpeace.

Some of the environmental group representatives who are part of the CEO Climate Dialogue have ties to the establishment, or centrist wing, of the Democratic Party.

One of them is Bob Perciasepe, CEO of the Center for Climate and Energy Solutions and former Deputy Administrator of the U.S. Environmental Protection Agency (EPA) under President Obama.

The creation of the CEO Climate Dialogue comes as Democratic Party presidential candidate leading in the polls, Joe Biden, has said he supports a “middle ground” approach on federal climate policy.

Joshua Frank, Deputy Editor of the publication CounterPunch and co-author of the 2018 book The Big Heat: Earth on the Brink, called the new group “villains who aren’t our allies in the fight to curb the climate catastrophe.”

“The list of corporate sponsors for CEO Climate Dialogue is composed of some of the world’s worst climate offenders like Dominion, Shell and BP,” he said. “These companies, which thrive on fossil fuel extraction and watered-down regulations, are the problem, not the solution.”

Source: https://therealnews.com/columns/history-repeats-itself-as-corporations-join-big-green-to-craft-market-based-climate-plan
Droolin’ Dog sniffed out this story and shared it with you.
The Article Was Written/Published By: Hezvo Mpunga