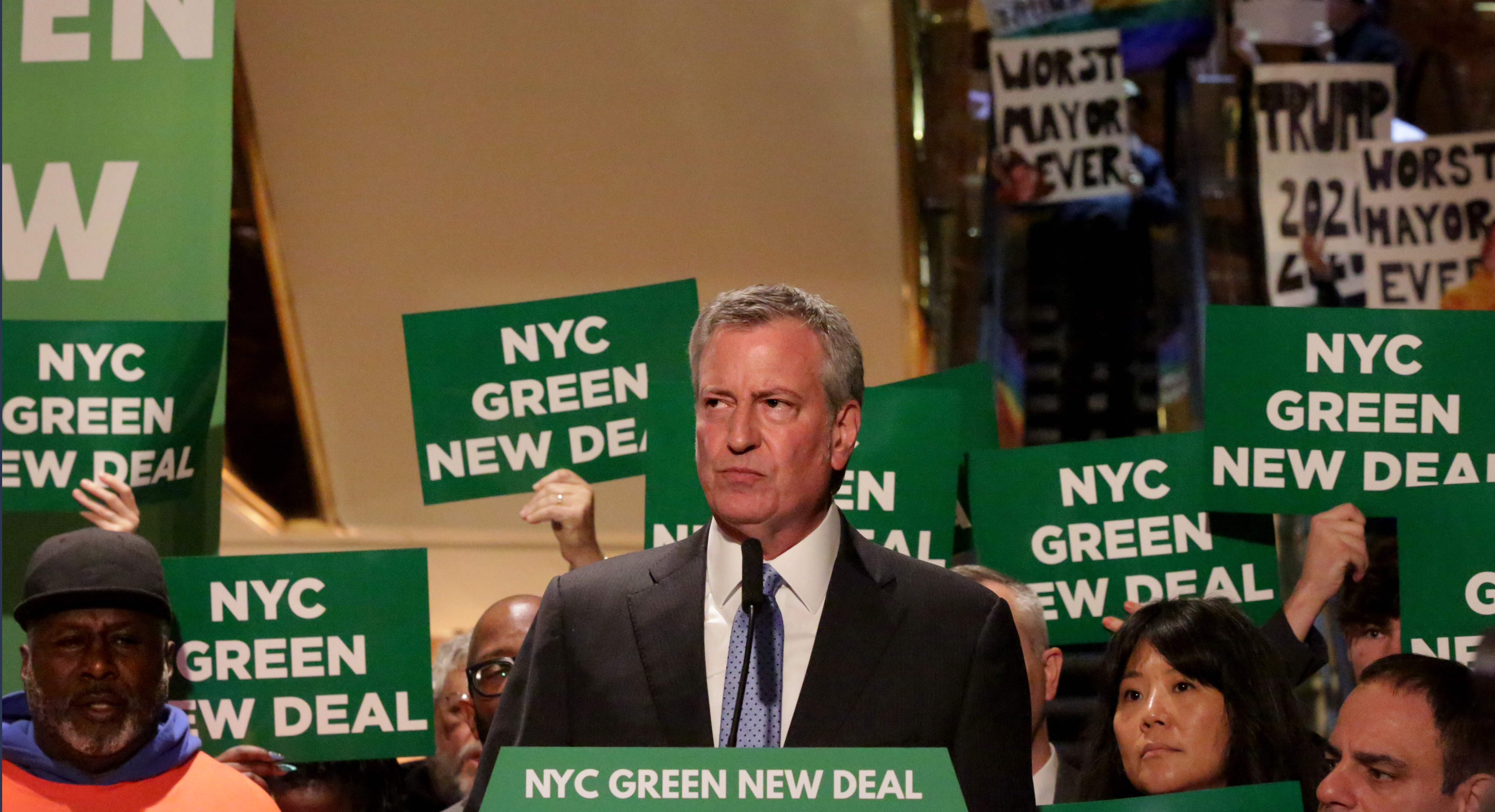 The news conference, held in the lobby of Trump Tower, was designed to put the president “on notice,” de Blasio said, for the pollution emitted by Trump’s buildings. But the event, moved inside at the last minute due to rain, was more of a circus than a rally. Much of the mayor’s roughly eight-minute speech was drowned out by music played at curiously high volumes in the lobby, protesters shouting, “You suck,” among other profanities, and several people riding the escalators behind the mayor, toting signs that read “Trump 2020” and “Worst Mayor Ever.”

The din was so loud, de Blasio had to leave his lectern and request reporters walk forward just so he could hear their questions.

The event comes the same week the mayor said he will formally announce whether or not he plans to run for president. De Blasio, a Democrat, has teased a run for months, making trips to Iowa and New Hampshire to give speeches on some of his signature policies.

Monday’s event was meant to tout a City Council bill passed in April, which mandates buildings larger than 25,000 square feet cut their emissions or face fines. Buildings are the leading source of greenhouse gases in the city. The bill, which the mayor has yet to sign, is a symbol of the city’s “Green New Deal” and his intent to go after any landlord, “even the president of the United States,” the mayor said.

That message was somewhat blunted when the mayor was unable to name any other landlords with high-emissions buildings and when it was revealed de Blasio had been driven to the event — a sore spot for a mayor who has been criticized for regularly riding a gas-guzzling SUV to his local gym.

Asked if the venue and the ensuing chaos was the best way to get his message across, de Blasio defended the public’s right to protest.

“This is a public space where people are allowed to express their views,” de Blasio said. “In New York City, we’re perfectly tough. If people want to offer their opposition, it doesn’t change me one bit.”

Climate change is gearing up to become a major issue for Democrats in the 2020 political election.

De Blasio also took time out during the event to voice opposition to a controversial natural gas pipeline that would run from New Jersey to Queens.

Environmental advocates have been pushing Gov. Andrew Cuomo to deny the pipeline a water quality permit, which is necessary to move forward with construction. De Blasio took a position on the 24-mile line just days before Cuomo must decide whether to reject the permit.

Still, De Blasio rejected the premise that the event had the tone of a campaign rally.

“This is about a bill that was passed by the City Council that is very clear and serious about the consequences for building owners who do not comply with the law,” de Blasio said. “These buildings are a big part of the problem, and we’re making it very clear — it doesn’t matter who you are, even the President of the United States has to abide by the law of this city.”

The bill itself is not new, having been an espoused priority of de Blasio’s since at least 2016. It had been stalled for years due to a number of factors, including some discontent among Council Members with the mayor’s original vision for the bill.

Council Member Costa Constantinides, who was present Monday, introduced a new version of the bill in late 2018 that finally mustered enough support to pass the full Council last month. The bill will require buildings to cut their emissions 40 percent by 2030 by either purchasing renewable energy or making energy efficiency upgrades. De Blasio has not signed the bill, but it automatically becomes law on May 17.

Although the bill targets all buildings over 25,000 square feet, de Blasio focused the event on eight of Trump’s properties. He said they are “among the biggest polluters,” producing the same amount of greenhouse gas emissions as 5,800 cars on the road.

A spokesperson for the Trump Organization did not return a request for comment.

“We have a message for President Trump and all the other big building owners in New York City: cut your emissions or we will cut something you really care about,” de Blasio said. “We will take your money. We will find you, we will hold you accountable.”

Source: https://www.politico.com/states/new-york/city-hall/story/2019/05/13/de-blasio-event-to-attack-trump-on-climate-change-turns-into-spectacle-1014815
Droolin’ Dog sniffed out this story and shared it with you.
The Article Was Written/Published By: dmuoio@politico.com (Danielle Muoio)