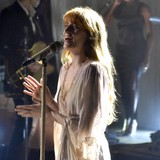 Last month, Florence + The Machine released their own version of the Game of Thrones classic “Jenny’s Song.” Titled “Jenny of Oldstones,” the band’s reworking was later made available on streaming platforms, and the show later created a lyric video for the song with video footage from the series. Now, Florence Welch and co. have performed…

Source: https://www.spin.com/2019/05/florence-the-machine-debut-game-of-thrones-song-jenny-of-oldstones-live-watch/
Indie Brew found this story and shared it with you.
The Article Was Written/Published By: Rob Arcand