Chrome is known for being a RAM hog, but most Chromebooks come with only 4 GB of RAM. Chrome OS manages RAM differently than Windows or Mac computers, so it can do more with less.

Chromebooks Don’t Need That Much RAM

First of all, just because Chrome is a RAM glutton on your Windows machine or Mac, that doesn’t mean it’s a Chrome issue across the board. Chrome OS is very different than a traditional computer, and so is the way it handles RAM.

Without getting overly complicated (which is easy to do with a topic like this), let’s take a closer look at how Chrome OS manages RAM. Since it’s based on Linux and uses the Linux kernel, it handles RAM in a very similar manner. Google has tweaked the process a little bit to better suit Chrome OS’ needs, but the general idea is the same.

Chrome OS uses something called “zRAM” to keep things snappier than a Windows machine or Mac with less RAM. This compressed virtual memory goes a long way in making the best of lower RAM by creating a compressed block in RAM and using that in place of virtual memory, which is generally stored on the hard disk (and thus, slower).

Data is then transferred in and out of this compressed space as needed until it’s full, at which point the swap space (virtual RAM on the hard disk) is used. The result is a much faster, more efficient use of RAM. Because the compression happens on the fly in zRAM and RAM is generally quicker than swap, Chrome OS can do a lot more with less.

Google also makes the most of RAM in Chrome OS by using something called a “double-wall” low memory state. The basic gist is that a “soft wall” is set in RAM, where, once reached, the OS starts to purge older activities. It begins with tabs that were opened but haven’t been seen, then moves to background tabs that haven’t been clicked/typed/scroll in, then background tabs, and finally, the foreground tab. In other words, it systematically tries to close processes that it assumes the users aren’t interested in first, before becoming increasingly more aggressive.

The second wall of this “double-wall” system is the “hard wall.” This is when the system is entirely out of RAM, and the kernel’s Out of Memory (OOM) killer is triggered. When that happens, Chrome will generally crash. The good news is that this rarely happens anymore—once the soft wall is hit, purging background items usually does the trick to prevent the hard wall from ever getting hit. If it does happen, it’s generally because of some other type of error—like a fast memory leak.

Of course, that’s not to say that there’s no such thing as “too little RAM” on a Chromebook—there absolutely is. It’s all about how you use your ‘book.

How Much RAM Do You Need? 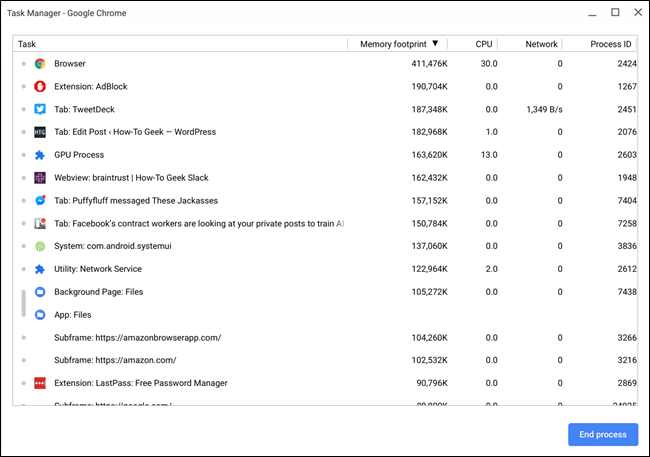 Source: https://www.howtogeek.com/413556/how-much-ram-does-a-chromebook-really-need/
Proactive Computing found this story and shared it with you.
The Article Was Written/Published By: Cameron Summerson