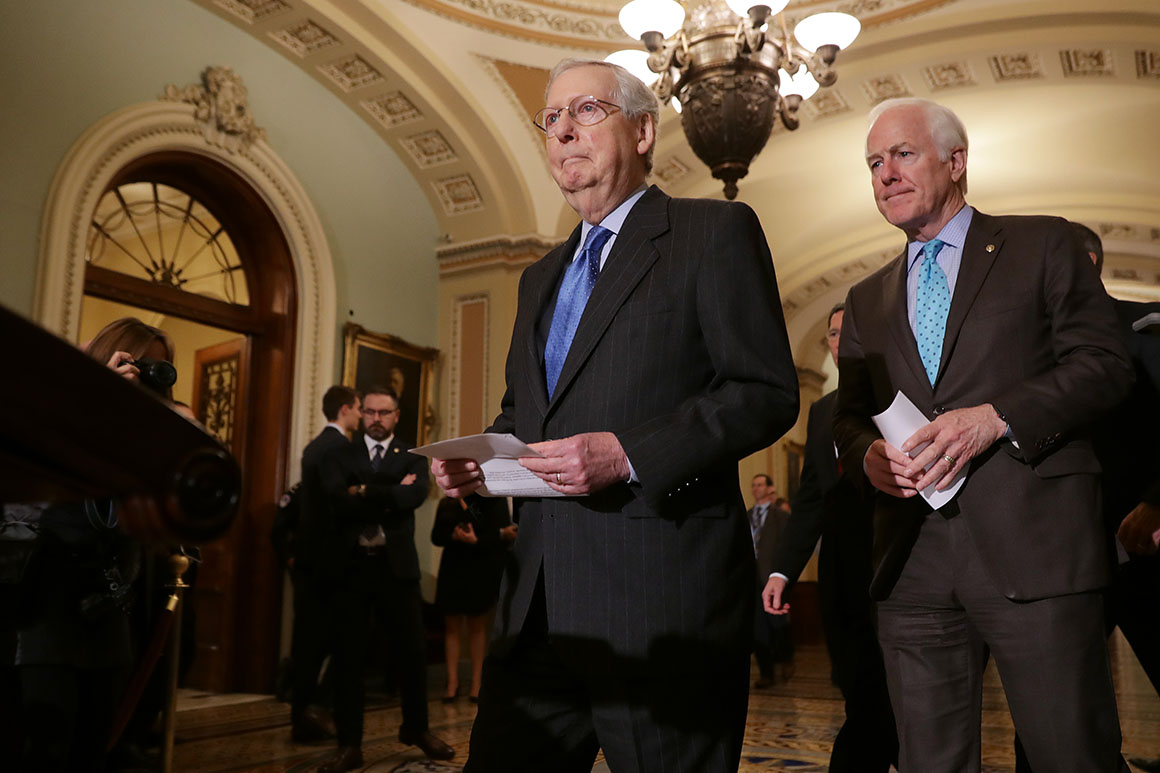 Senate Republicans are holding high-level meetings with President Donald Trump on an immigration reform bill. House Democrats are crafting their own plan to protect Dreamers. And the administration has formally requested billions in emergency aid to address the surge of migrants at the border.

But the apparent movement is something of a mirage. There’s little hope in the Capitol of any big deal before the next election — still 18 months away — even amid broad agreement that humanitarian needs are only increasing by the day.

“It’s the same old story, isn’t it?” said Sen. John Cornyn (R-Texas). “It’ll break your heart. We never quite get to the finish line.”

“No indication” this time will be different, said Senate Minority Whip Dick Durbin (D-Ill.), who is often on the opposite side of the debate from Cornyn. “If they’re trying to move something with Central America and the current situation we face, it’s not a quick undertaking. This is not an easy fix.”

While Senate Majority Leader Mitch McConnell declared a month ago that he wanted to work with Democrats on immigration, Minority Leader Chuck Schumer (D-N.Y.) said McConnell hasn’t raised it with him once. A Republican aide said meanwhile that Democrats have made no outreach to McConnell on legislation that can pass both chambers and be signed into law. Speaker Nancy Pelosi (D-Calif.) and McConnell have yet to discuss immigration.

When the issue briefly came up in Trump’s meeting with the Democratic leaders last week, they quickly stalemated, with Trump calling the border “a disaster” and Pelosi countering that comprehensive reform was needed, according to an aide.

It’s a familiar, if frustrating, dynamic to veterans of the immigration wars on Capitol Hill. And this time, lawmakers can’t agree on what the central immigration issue is, much less how to address it. It’s a microcosm of why so many efforts have failed, and why action is even less likely ahead of the 2020 campaign.

While Cornyn argued that his bill with Rep. Henry Cuellar (D-Texas) to deal with an increase in border crossings could avoid being weighed down like previous efforts, Durbin said Democrats simply must address the plight of Dreamers if the issue of immigration comes up.

The president seems to have set up an immigration echo chamber. In a Tuesday meeting at the White House with a dozen mostly conservative GOP senators, Trump and Republicans discussed reforming the legal immigration system. Participants said that unlike past White House-backed efforts, this one would not cut the overall level of legal immigration, and thus should be viewed as an olive branch to Democrats.

“The United States has by far the loosest merit system in the world,” Sen. Kevin Cramer (R-N.D.) said afterward. “I share the president’s desire to get something done that’s significant rather than talk about my goals that would be impossible.”

But no Democrats were invited nor were any GOP senators who have worked on more centrist immigration proposals. Instead, the room was filled with people who opposed the Senate’s bipartisan Gang of Eight bill, with Sen. David Perdue (R-Ga.) conceding that the forthcoming proposal would be the “second-generation” of the conservative RAISE Act, which cut some legal immigration levels and drew heated Democratic criticism.

The exclusion of those inclined to be deal-makers on immigration left little doubt that any sort of agreement is far off.

“Ha,” Rep. John Yarmuth (D-Ky.) laughed when asked to rate the chances for a comprehensive deal this Congress. “Slim to none, unfortunately.”

Across the Capitol, House Democrats are struggling to coalesce around a piece of the immigration puzzle that generally finds widespread agreement within the party — providing a pathway to citizenship for undocumented immigrants brought to the U.S. as children.

Pelosi and other top Democrats hope to move ahead with a vote on a Dreamer bill in the House Judiciary Committee next week, with a floor vote either the last week of May or sometime in June. But right now, the bill doesn’t even have the support to survive a committee vote amid a dispute over how to treat immigrants who committed some misdemeanors.

“Well we’re busy. We’re trying to restore law and order in America,” said Rep. Jamie Raskin (D-Md.), a member of the Judiciary Committee, who blamed the delay in part on the panel’s focus on special counsel Robert Mueller’s report.

Pelosi is meeting with various immigration rights groups and lawmakers to try to iron out the differences on Wednesday.

But the internal Democratic debate over Dreamers illustrates the hurdles that threaten to derail any sweeping immigration bill. And that’s to say nothing of the kind of negotiations between Democrats and Republicans that will be needed to get something to Trump’s desk.

“If that [2013] bill became law, most of the problems we’re having today, we’d not be having. And President Trump is the ideal president to lead an effort to deal with a broad, legal immigration law,” said Sen. Lamar Alexander (R-Tenn.).

Alexander said McConnell would follow through on the commitment he made in April, if there’s something to vote on: “Sen. McConnell has said repeatedly that he’ll put any bill on the floor that’s important to the country and has bipartisan support this year.”

“We would like Mitch McConnell to take up a single bill we have put towards him. When you’re self-described as the Grim Reaper, it doesn’t give me great optimism,” said Rep. Katherine Clark (D-Mass.).

Yet even building a simple majority on immigration in the House has been painful. The House Judiciary Committee had tentatively planned to vote on a Dreamer bill this week — teeing it up for floor action before the Memorial Day break — before ultimately punting as Democrats and outside advocacy groups continue to bicker over language in the bill dealing with citizenship for immigrants who have committed certain crimes.

Any immigration bill would need buy-in from both Pelosi and McConnell, but the two have barely spoken in recent months — last chatting in April about a way to avoid looming budget cuts later this year. Asked whether he’d spoken to McConnell about the issue, Schumer replied: “Not once. Haven’t heard him from him.”

Lawmakers could try to amend the White House’s emergency border spending request to include broader provisions, but it’s an imperfect vehicle for a full-on immigration debate, and Democrats have been reluctant to grant Trump all the money he’s demanded and are still fighting his unilateral move to fund his border wall.

Senate Majority Whip John Thune (R-S.D.) said in an interview that the window for action on the issue closes at the end of this year, given partisan tensions that increase during a presidential election year.

In fact, House Democrats are already looking beyond 2020.

Lawmakers and aides with knowledge of caucus discussions say they are in the early stages of drafting a comprehensive proposal, but there is no timeline to release anything. The end goal, according to some sources, is to have a bill that serves as a starting point in 2021 if Democrats control all of Washington.

Source: https://www.politico.com/story/2019/05/08/trump-immigration-reform-1309744
Droolin’ Dog sniffed out this story and shared it with you.
The Article Was Written/Published By: hcaygle@politico.com (Heather Caygle)