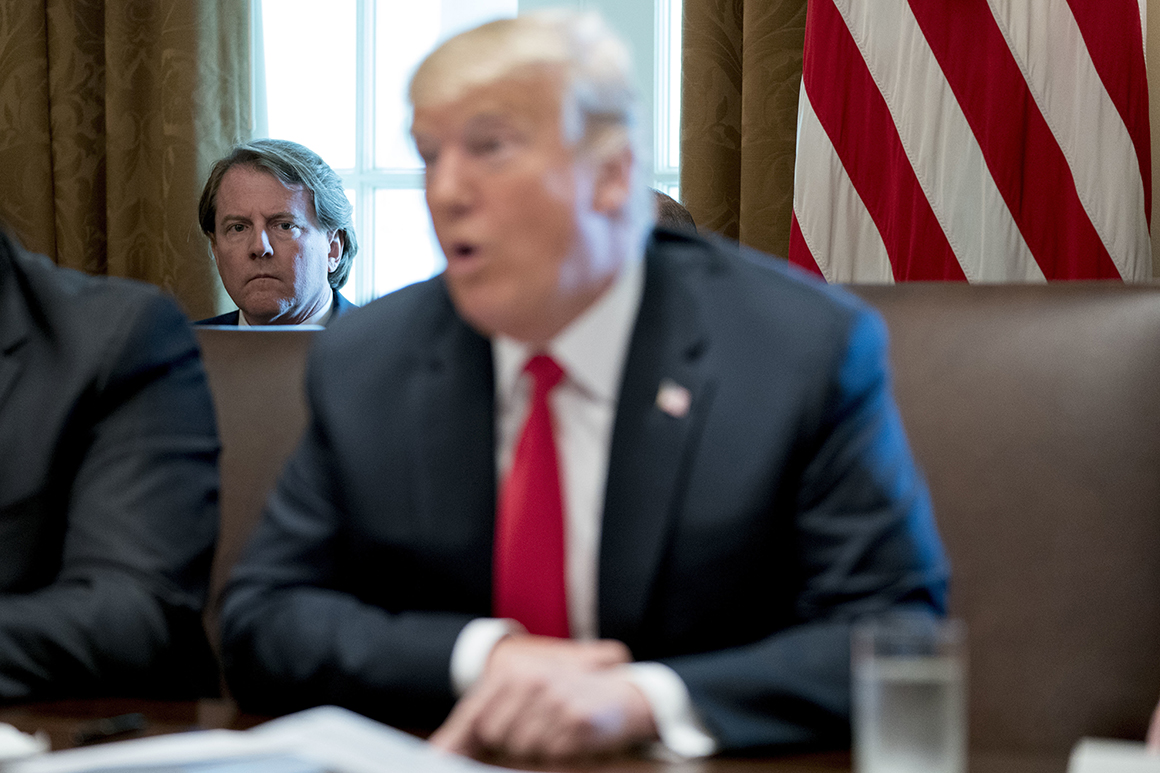 The Trump campaign has hired its own in-house attorney for its 2020 reelection bid — shifting future business away from Jones Day, the law firm, that has represented Trump since his first run for president.

Campaign officials and advisers cast the decision to hire Nathan Groth — a former lawyer for the Republican National Committee and Wisconsin Gov. Scott Walker — as a money-saving move, supported by the businessman-turned-president who loves to cut costs.

But close Trump advisers say the decision also stems from disappointment with the White House’s former top attorney and current Jones Day partner, Don McGahn, whose behavior has irked the president and some of his family members.

Taking business away from Jones Day is payback, these advisers say, for McGahn’s soured relationship with the Trump family and a handful articles in high-profile newspapers that the family blames, unfairly or not, on the former White House counsel.

“Why in the world would you want to put your enemy on the payroll?” said one adviser close to the White House. “They do not want to reward his firm. Trump arrived at that point long ago, but the security clearance memo stories put a fine point on it.”

One February 2019 story, in particular, caught the White House’s attention, when The New York Times reported that the president ordered John Kelly, his chief of staff at the time, to grant a security clearance to Jared Kushner. Kelly had written an internal memo on it, according to the Times. That fact was closely held inside the White House, and few officials other than Kelly and McGahn knew, say two close White House advisers — and the administration blamed McGahn for the leak.

The Mueller report, released on Thursday, seems only to have fueled Trump’s anger. It portrayed McGahn as one of the key officials who stopped Trump from taking actions that might be deemed to have obstructed justice.

In one especially colorful passage, McGahn is quoted as saying that the president had asked him to do “crazy shit.” In another, Trump berates his White House counsel for taking too many notes, comparing him unfavorably to his longtime consigilere, the late Roy Cohn.

On Friday, Trump seemed to take aim at McGahn on Twitter, writing, “Watch out for people that take so-called ‘notes,’ when the notes never existed until needed.”

The decision to shift law firms has been in the works for weeks, however, and predates release of the Mueller report.

The loss of Trump campaign business will be a financial blow to the D.C. political law practice of Jones Day, which had raked in $5.5 million in legal fees since the start of the 2016 Trump campaign, according to data from the Federal Election Commission.

The campaign still intends to lean on Jones Day for litigation already underway, so it is not severing all ties, and as a global law firm with 43 offices and 2,500 lawyers, its work for Trump campaign is just one small piece of its business.

The current head of the Jones Day political law practice, Ben Ginsberg, did not respond to requests for comment on Friday.

Groth will report to senior lawyers on the campaign, according to a Republican operative familiar with the operation. He will handle all of the compliance work such as conventions, ballot access and run-of-the-mill services like reviewing employment contracts and leases. This was a more typical arrangement for a campaign, the operative added — to have an in-house attorney and then other outside law firms for additional help. In 2016, the Trump campaign leaned entirely on Jones Day and McGahn, a former appointee to the Federal Elections Commission.

The move marks the waning of a symbiotic relationship between the law firm and the sitting president. After McGahn was named White House counsel, he brought with him into the administration 12 Jones Day attorneys who worked in the counsel’s office, and the departments of Commerce, Agriculture and Justice, including the current solicitor general, who is responsible for arguing the administration’s positions before the Supreme Court.

At the time, David Lat of the legal blog Above the Law wrote: “This is very good news for Jones Day and the lawyers remaining at the firm. It’s great for the firm’s prestige, and it also means that JD lawyers will be eagerly sought after by clients with issues pending before their former colleagues.”

McGahn returned to Jones Day as a partner this March, leading the government regulation practice. McGahn, a close ally of Senate Majority Leader Mitch McConnell, continues to advise Senate Republicans on judicial nominations, while focusing his law practice on the nuances of regulation, another of his passions from his White House tenure. Allies say he doesn’t mind losing the Trump campaign work and is quite happy with his new setup.

Prior to joining the White House, McGahn worked as a partner in the election law group at Jones Day from June 2014 to January 2017.

Maggie Severns contributed to this report.

Source: https://www.politico.com/story/2019/04/19/trump-campaign-mcgahn-1283545
Droolin’ Dog sniffed out this story and shared it with you.
The Article Was Written/Published By: ncook@politico.com (Nancy Cook)