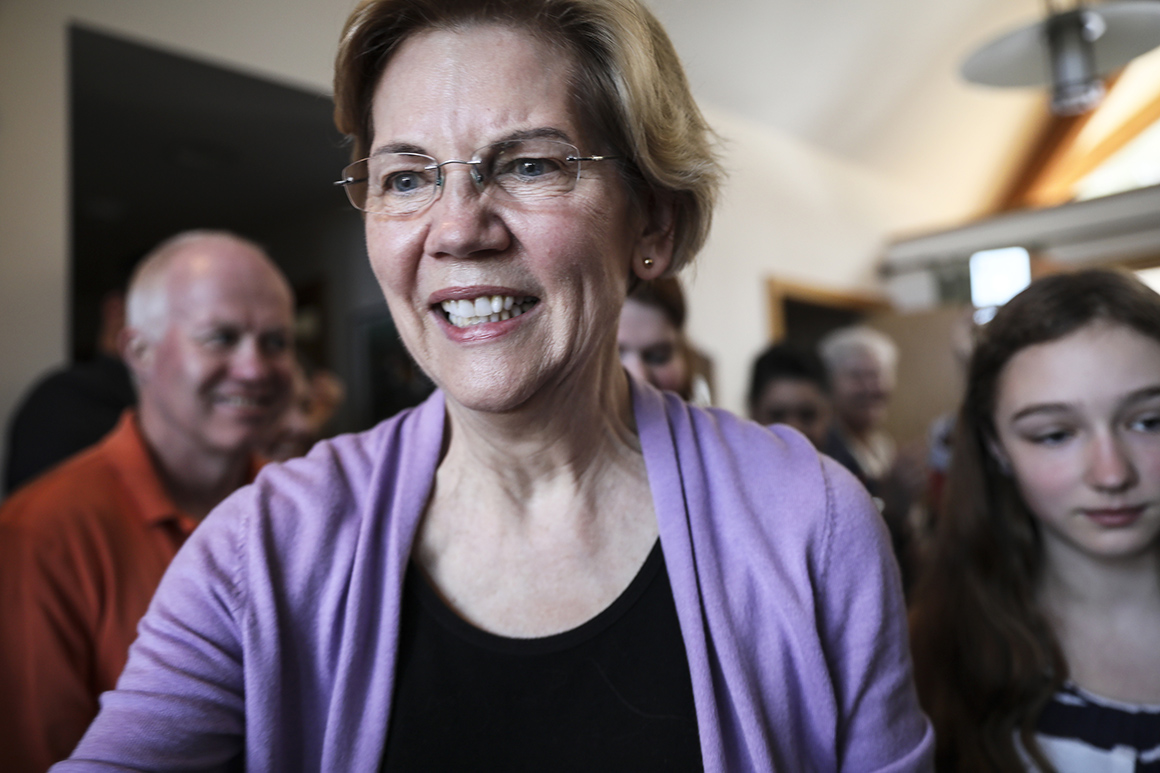 BEAUFORT, S.C. — When Elizabeth Warren got a question on housing discrimination at a campaign event this week, she went into full wonk mode — and the diverse crowd packed into a middle-school auditorium ate it up.

The Massachusetts senator launched into a brief history lesson on African-American homebuyers being rejected outside designated areas, black families getting hit hardest by subprime mortgages and foreclosures during the 2008 crash, and black homeownership still lagging far behind whites. “That’s a problem, and it’s a race problem,” Warren thundered, emphasizing “race” as the crowd erupted into applause. “And we need to attack it head on.”

Warren is stuck in single digits in national polls and is being overshadowed by white male rivals like Bernie Sanders and Pete Buttigieg. But her consistent attention to racial disparities — and her truckful of policy proposals to fix them across every economic issue — is drawing praise from a critical voting bloc that could eventually pay dividends: African-Americans, and especially African-American women.

The plans are penetrating the community of black operatives and activists working to mobilize black voters in 2020. Her housing affordability proposal is hailed as one that would do the most to close the racial wealth gap. She was one of the first candidates to endorse a House bill establishing a commission to study reparations for the descendants of slaves. And when she held a climate change forum in Charleston recently four out of the six panelists were local African-American leaders.

“Based on the fact that we’ve got a self-proclaimed nationalist in the presidential office, it’s really important that we don’t run away from identity politics,” said LaTosha Brown, founder of Black Voters Matter. “Elizabeth is not.”

“She is not running away from this conversation about race and class and gender and the intersection of that,” Brown continued, “To me that distinguishes her.”

The competition for black voters is intense and growing, and Warren is up against two prominent African-American senators, Cory Booker and Kamala Harris — plus former Vice President Joe Biden, who has strong ties to the black community and a bond with former President Barack Obama.

But Warren’s doing something right. Her three-state Southern tour in March through Tennessee, Mississippi and Alabama didn’t go unnoticed. Adrianne Shropshire, executive director of the progressive BlackPAC, has seen a steady increase in the number of black influencers across social media “raising the flag,” asking why Warren and her policies centered on black communities aren’t getting more attention.

“No one,” Shropshire said, “is raising the flag around any of these other candidates in the same way.”

Warren’s affordable housing plan is co-sponsored by one of her presidential rivals and six members of the Congressional Black Caucus. And in South Carolina, Warren delivered the details herself: If elected president she’d propose building 3.2 million new housing units, and federal assistance will go to any person of color who lives or has lived in a redlined area, who is a first-time homebuyer or who lost a home.

When a young white man asked Warren about marijuana. “I would legalize it,” Warren said, because “this is a matter, for me, of racial justice.”

The black voters at her rally, many of whom said they were still undecided but ranked Warren at the top of their list, took stock of her answers.

“She’s really speaking to the people of color, the marginalized,” said 71-year-old Alice Walker, who is African-American.

“I give her kudos for coming to the Deep South and not running away from areas that she cares about,” said Brown, who is from Selma, Alabama. “And that are probably not going to offer any electoral college votes for her.”

Warren wouldn’t say if her laser focus on race across her policies is intentional or an attempt to learn from Democrats’ past reluctance to embrace “identity politics” and the drop in African-American turnout in key places in the 2016 election.

“To ignore race in today’s political and economic system is to ignore reality,” Warren said in a brief interview with POLITICO on the sidelines of her South Carolina stop. “I want America to talk more about this.”

But a key ingredient to any presidential campaign is whether or not the voters buy a candidate’s message. So far, Warren’s decision to make race a focal point of her campaign has gotten her in the game with voters.

Ifeoma Ike, who worked on Doug Jones’ long shot but ultimately successful Alabama Senate bid, said Warren is one of the candidates she’s “paid attention to from jump” and praised the senator’s “smart economic policy.” 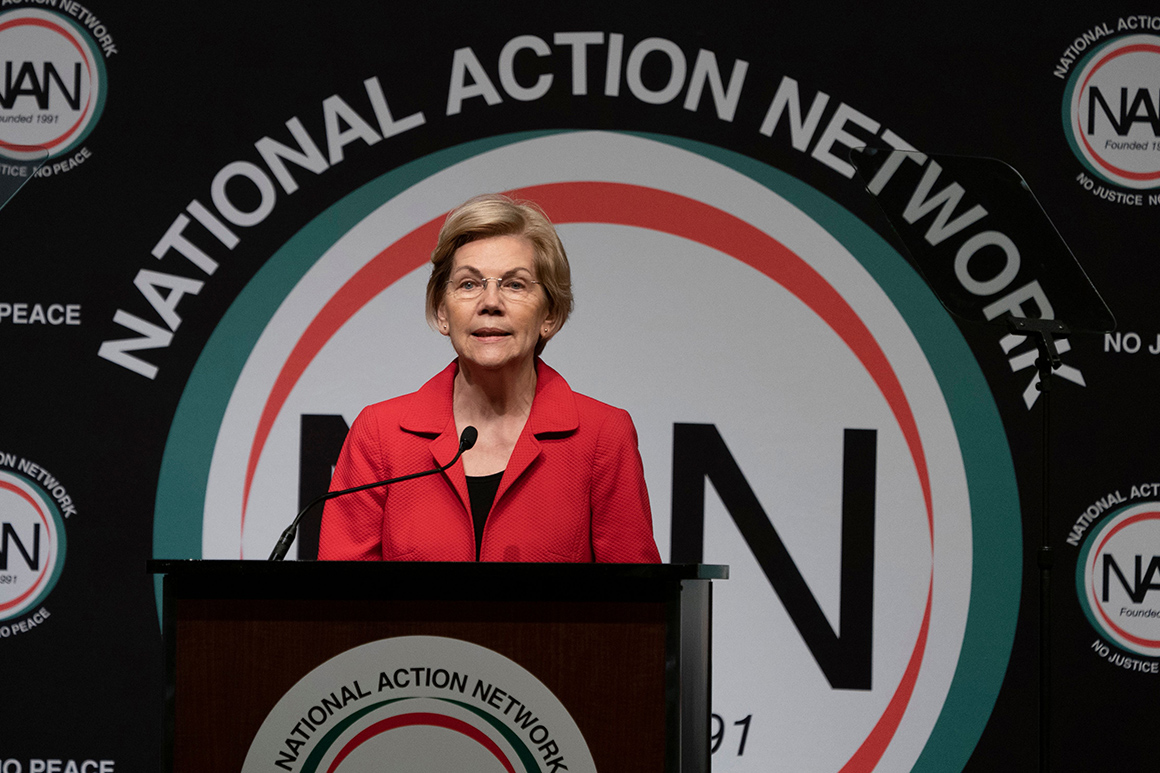 “We pay attention to not just the comfortability but the rationale and the frequency with which candidates authentically talk about these things,” said Ike, who runs the Democratic consulting firm Think Rubix. “In ways that are not just trying to appease [black voters] as a community.”

Warren passes that test. And her focus on race separates her, according to Ike and Brown, from the one candidate she’s compared to the most: Senate colleague Bernie Sanders.

“This is an area where she’s actually breaking away from Bernie,” said Ike. “The minute she started talking about reparations, other candidates did too.”

Though Sanders did well with young black voters in 2016, he has made notable changes to his campaign this time around, frequently calling Trump a racist and attempting to integrate race more into his vision — but he doesn’t focus on race in his economic policies to the degree Warren does. Instead, Sanders talks about class, and the expanding gap between the rich and poor in the country.

Ike pointed out that the dynamics have markedly changed in the Democratic primary of today versus 2016. Where Sanders has pulled the party along on Medicare for All, Warren appears to be doing the same on her economic policies and race.

In 2016, Ike said, black activists struggled to get candidates to simply say “black lives matter,” referring to the movement against police brutality on people of color.

As Sanders and Hillary Clinton were met by protesting Black Lives Matter activists at their campaign stops, Warren delivered a speech in September of 2015 at the Edward M. Kennedy Institute, offering what was described then by The Washington Post as the strongest endorsement to date of the protest movement.

“We’ve had way too many decades, way too many generations of trying to sweep race issues under the rug and it’s not working for us,” Warren told POLITICO. “It’s time to do this differently, it’s time to do it more honestly and more directly.”

Source: https://www.politico.com/story/2019/04/19/elizabeth-warren-black-voters-1282642
Droolin’ Dog sniffed out this story and shared it with you.
The Article Was Written/Published By: Laura Barrón-López