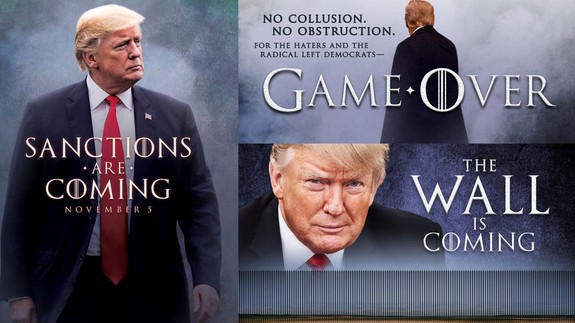 Donald Trump may be a Game of Thrones fan, but the feeling isn’t necessarily mutual.

On Thursday, after the president tweeted yet another bizarre reference to the HBO show ahead of the Mueller report drop, the network requested he stop using the show for his own personal agenda.

An HBO rep told Mashable, “Though we can understand the enthusiasm for Game of Thrones now that the final season has arrived, we still prefer our intellectual property not be used for political purposes.”

The tweet, latest Game of Thrones themed tweet read, “No collusion. No obstruction. For the haters and the radical left Democrats — GAME OVER,” and used HBO’s classic font. Read more…

Source: https://mashable.com/article/hbo-donald-trump-game-of-thrones-response/
Indie Brew found this story and shared it with you.
The Article Was Written/Published By: Nicole Gallucci