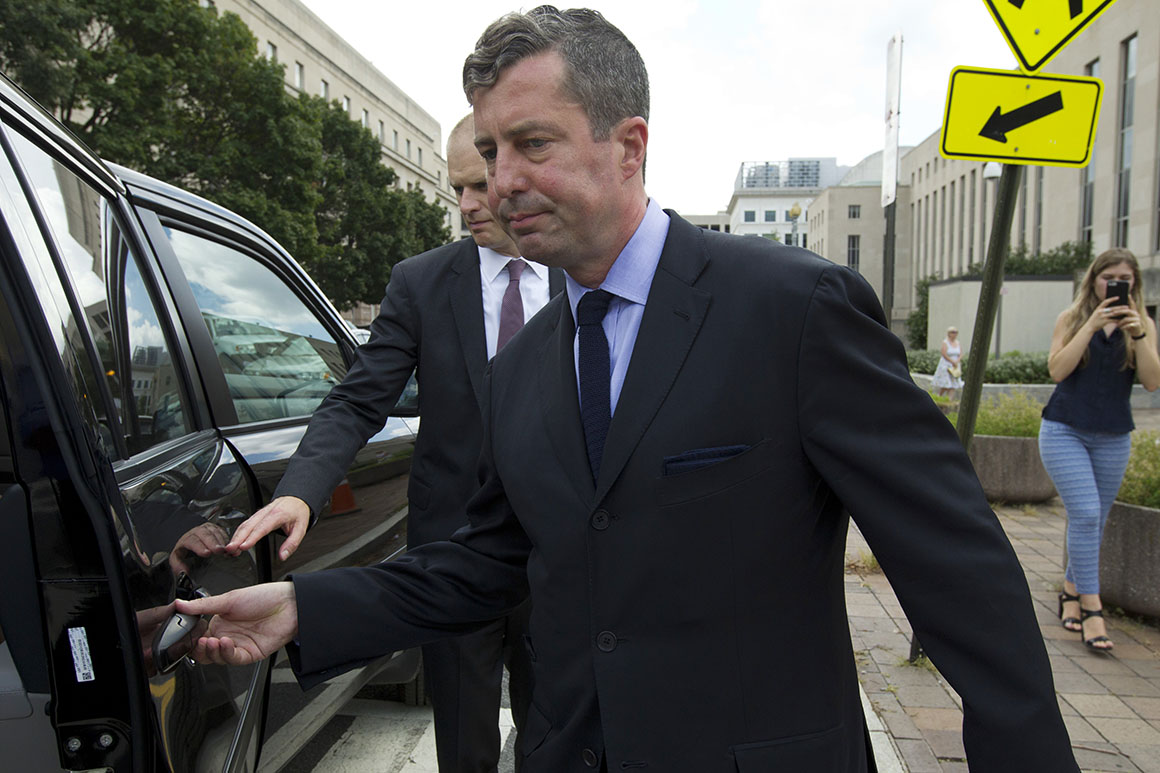 An American lobbyist who has admitted to paying $50,000 for a pro-Russian Ukrainian oligarch to attend President Donald Trump’s inauguration served as a “valuable resource” for government investigators and deserves credit for that help at his upcoming sentencing, federal prosecutors said on Monday.

W. Samuel Patten met or spoke by phone with prosecutors for special counsel Robert Mueller and other government investigators nine times as part of his cooperation agreement after pleading guilty last summer for failing to register as a foreign lobbyist in the U.S., according to the U.S. attorney’s office for the District of Columbia, which inherited the case from the special counsel.

“In all of these sessions, Patten has been honest and straightforward with government investigators,” the government said in a court filing ahead of the lobbyist’s sentencing on Friday.

The federal prosecutors’ sentencing memo largely holds back in describing exactly what Patten helped them on, explaining to U.S. District Court Judge Amy Berman Jackson that they’d file that material under seal because it “includes sensitive information about other investigations and persons who have not been (and may not be) charged with a crime.”

Patten’s past work as an overseas political consultant, the federal prosecutors said, helped to make him a “valuable resource for the government in a number of other criminal investigations, providing helpful information about additional individuals and entities.”

In explaining Patten’s cooperation, prosecutors did confirm he was prepared to testify last fall against his associate Paul Manafort before the former Trump campaign chairman pleaded guilty and avoided a trial in D.C. on charges of money laundering, failing to register as a foreign agent and witness tampering.

Patten faces a maximum sentence of five years in prison, a fine up to $250,000 and supervised release for up to three years, though his attorneys on Monday urged Jackson to instead give the 47-year-old lobbyist probation in light of his cooperation and accepting responsibility for his crimes.

“He asks the Court, in fashioning his sentence, to recognize that his crimes were not motivated by greed or a desire to conceal relevant information from the American public or to aid or cover up any potential interference with the 2016 Presidential election,” Patten’s lawyers wrote in their own sentencing memo. “To the contrary, Mr. Patten’s decisions in this case stemmed primarily from a desire to accommodate his clients’ requests and to present himself in the best possible light after unexpectedly finding himself a subject of the Russian interference investigation.”

According to prosecutors, Patten paid for an American “straw purchaser” to buy tickets for his unnamed Ukrainian client from the Trump inaugural committee without revealing they were financed by a foreign individual.

In their sentencing memo Monday, Patten’s lawyers acknowledged their client’s ill-advised move but argued it had nothing to do with partisan politics, noting he wasn’t a Trump supporter and voted for Hillary Clinton in the 2016 presidential election.

“In Mr. Patten’s mind, these were tickets to a post-election party and not an attempt to influence an election or politician,” they wrote. “More importantly, he was blinded by a desire to accommodate his client. While the above explains why Mr. Patten did what he did it provides no justification for his decision. It was a complete breakdown in judgment and Mr. Patten regrets his involvement with the inauguration tickets.”

Federal prosecutors also said Patten intentionally misled the Senate Intelligence Committee — which referred his case for criminal prosecution — by withholding documents and giving false testimony related to the foreign payment for the inaugural ticket, as well as the foreign lobbying violations.

Patten’s lawyers explained in their sentencing memo that their client “admittedly erred” in how he handled evidence sought by the Senate panel, including the deletion of about 200,000 emails from his Gmail account. Patten had earlier provided some documents to the Senate and sat for a voluntary interview so he “incorrectly believed that he was free to delete his emails.”

Friday’s sentencing will be the latest in a string of hearings tied to the Mueller investigation, which to date has included charges against at least 34 people and three companies. So far, Manafort’s seven-and-a-half year sentence tied to a series of financial and conspiracy charges stands out as the longest, followed by the three-year sentence that Michael Cohen, Trump’s former personal lawyer, is scheduled to begin serving next month.

Source: https://www.politico.com/story/2019/04/08/lobbyist-trump-inauguration-mueller-1261449
Droolin’ Dog sniffed out this story and shared it with you.
The Article Was Written/Published By: dsamuelsohn@politico.com (Darren Samuelsohn)