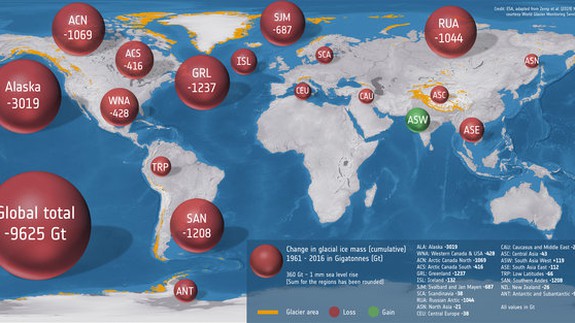 That’s how much ice Earth’s glaciers lost in the 55 years between 1961 and 2016. An international team of scientists used satellite and direct field observations to conclude that Earth’s glaciers have melted such a profound sum of ice in the last half-century. They published their report Monday in the journal Nature.

If one were to assume an average weight of 735,000 pounds for a 747 airliner (not the colossal Alaskan bear), that comes out to around 27 billion 747s worth of ice lost over this period.

This grand figure also means the planet is losing, on average, 335 billion metric tons of ice per year. (For reference, there are 2 trillion pounds of ice in just 1 billion tons.) Read more… Source: https://mashable.com/article/glaciers-melting-climate-change/
Droolin’ Dog sniffed out this story and shared it with you.
The Article Was Written/Published By: Mark Kaufman