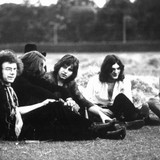 The entire discography of King Crimson studio albums is coming to streaming platforms later this year. The longtime streaming holdouts held a press event on Saturday in London, where their manager David Singleton said that the band’s 13 studio albums will soon be available to stream starting in May, as Rolling Stone points out. The move is part…

Source: https://www.spin.com/2019/04/king-crimson-entire-discography-is-coming-to-streaming-platforms-later-this-year/
Indie Brew found this story and shared it with you.
The Article Was Written/Published By: Rob Arcand