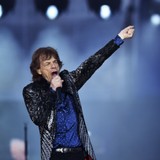 Mick Jagger has completed his heart valve procedure in New York and is recovering and in great health, sources tells Billboard.

Doctors were able to access Jagger’s heart valve through his femoral artery and are now monitoring the Rolling Stones frontman for any complications that could arise from the procedure, including excess bleeding.

Source: https://www.spin.com/2019/04/mick-jagger-heart-surgery-results/
Indie Brew found this story and shared it with you.
The Article Was Written/Published By: Dave Brooks, Billboard