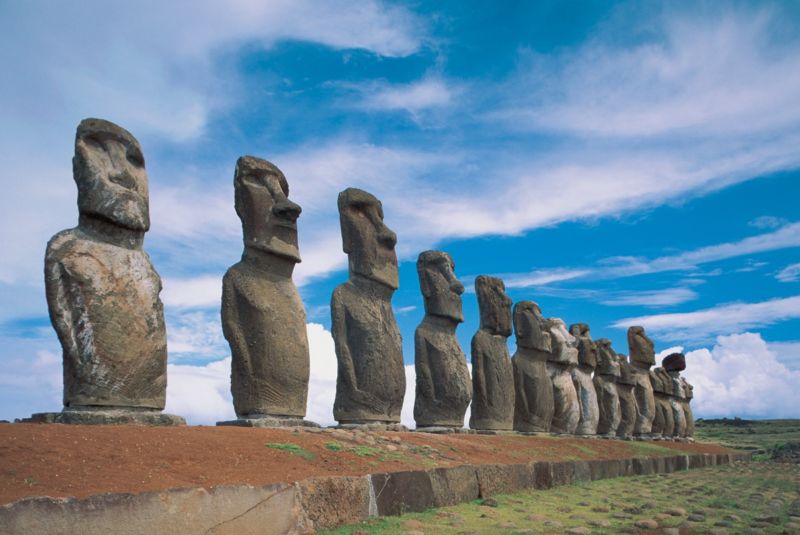 Chile’s Easter Island (Rapa Nui) is famous for its giant monumental statues, called moai, built by early inhabitants some 800 years ago. The islanders likely chose the statues’ locations based on the availability of fresh water sources, according to a recent paper in PLOS One.

Scholars have puzzled over the moai on Easter Island for decades, pondering their cultural significance, as well as how a Stone Age culture managed to carve and transport statues weighing as much as 92 tons. They were typically mounted on platforms called ahu. According to co-author Carl Lipo, an anthropologist at Binghamton University, you can have ahu (platforms) without moai (statues) and moai without ahu, usually along the roads leading to ahu; they were likely being transported and never got to their destination.

Back in 2012, Lipo and his colleague, Terry Hunt of the University of Arizona, showed that you could transport a ten-foot, five-ton moai a few hundred yards with just 18 people and three strong ropes by employing a rocking motion. Last year Lipo proposed an intriguing hypothesis for how the islanders placed red hats on top of some moai; those can weigh up to 13 tons. He suggested the inhabitants used ropes to roll the hats up a ramp.

Source: https://arstechnica.com/science/2019/03/scientists-think-theyve-solved-one-mystery-of-easter-islands-statues/
Droolin’ Dog sniffed out this story and shared it with you.
The Article Was Written/Published By: Jennifer Ouellette

Jeff Tweedy: Love Is the King

The L.I.B.R.A. (The Legend Is Back Running Atlanta)

Read Trey Alston’s review of the album. Source: https://pitchfork.com/reviews/albums/ti-the-libra-the-legend-is-back-running-atlanta/ Indie Brew found this story and shared it with you. The Article Was Written/Published By: Trey Alstonv [...]

Read Ian Cohen’s review of the album. Source: https://pitchfork.com/reviews/albums/field-medic-floral-prince/ Indie Brew found this story and shared it with you. The Article Was Written/Published By: Ian Cohenv [...]

Ty Dolla $ign and Post Malone Are Back Together on ‘Spicy’

After going quintuple platinum on 2018’s “Psycho,” Ty Dolla $ign and Post Malone reunited for “Spicy.” The song appears on the former’s new album, the aptly titled Featuring Ty Dolla $ign, out Friday on Atlantic. Whenever clubs reopen, expect to hear this catchy, bouncy track blaring through sound systems. “I keep talking about this new... [...]

Neil Young isn’t the only ex-CSNY member releasing old music today. Hours after Young shared “Homefires,” a previously unreleased track from 1974, Graham Nash has released a song from the same era. Nash wrote the protest song “Vote” during Richard Nixon’s administration, and he’s just now putting it out. He hopes it will … More... [...]

Jneiro Jarel Looks To the Future on “After A Thousand Years”

“I’m encouraging all to embrace that future instead of fear it.” Read full story on the Bandcamp Daily. Source: https://daily.bandcamp.com/features/jneiro-jarel-after-a-thousand-years-interview-2 Indie Brew found this story and shared it with you. The Article Was Written/Published By: Phillip Mlynarv [...]

Last year, members of the defunct Brooklyn band Pill reemerged as P.E. And back in March, they released their debut album under their new moniker, Person. Today, they return once more with a cover of the Stooges’ classic “I Wanna Be Your Dog.” It’s actually part of a single they’ve dubbed I Wanna Be Your... [...]

Last month, the London artist Shygirl released the gloriously fun single “FREAK,” which as it turns out was only a taste of an upcoming new EP called ALIAS that’s arriving next month. Today, she’s sharing a new song from it called “SLIME,” which was co-produced by SOPHIE, Kai Whiston and Sega Bodega. More » Source:... [...]