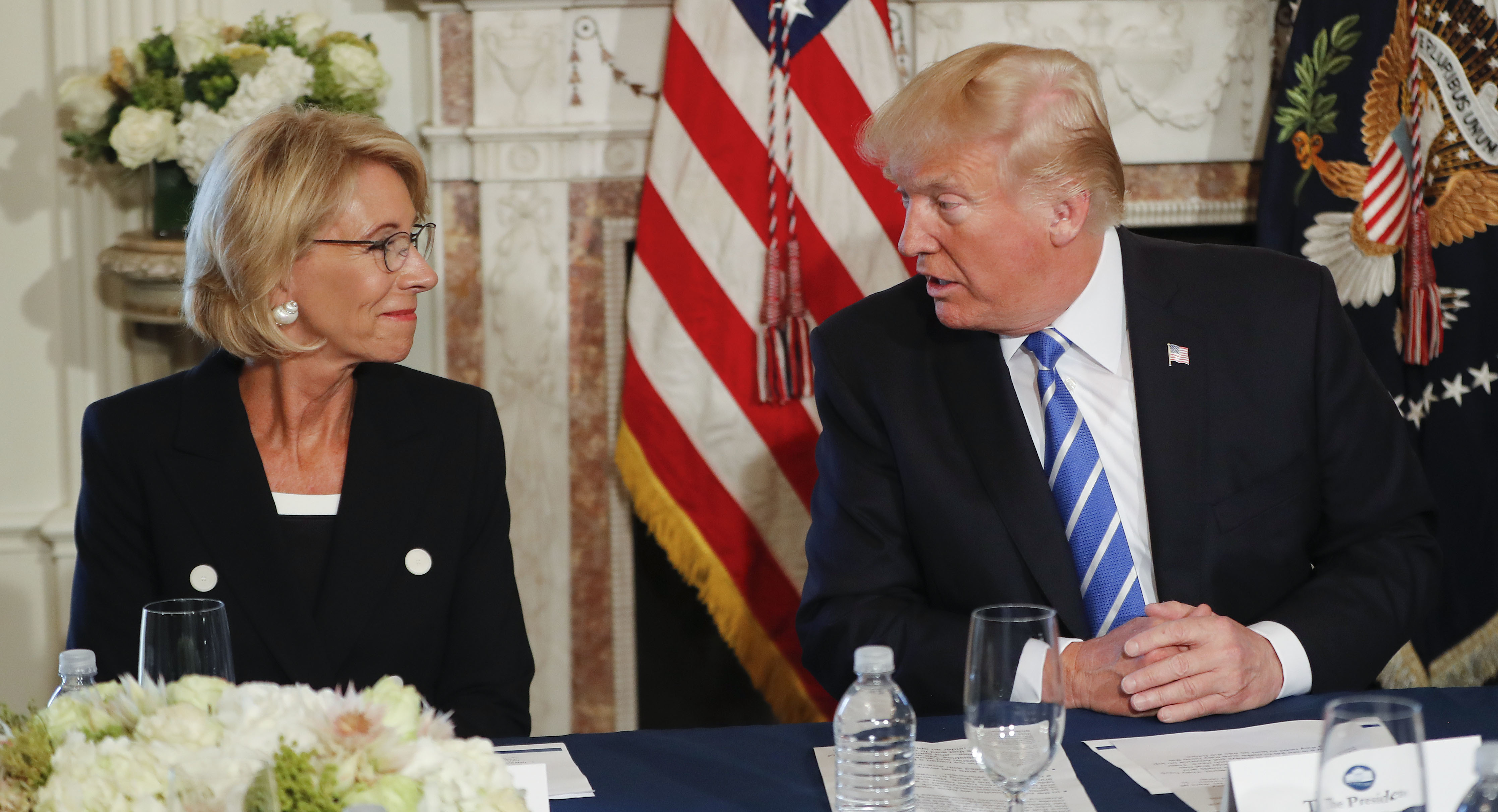 President Donald Trump is expected to sign an executive order on Thursday that addresses campus free speech as well as other higher education issues, according to several sources familiar with the White House’s plans.

Trump said earlier this month he would issue an executive order “requiring colleges and universities to support free speech if they want federal research dollars.”

But it’s not clear how the policy set to be unveiled on Thursday would work. Trump, who previously threatened to withdraw federal funding to the University of California, Berkeley, has said he wants “very costly” penalties for schools that don’t “support free speech.” At the CPAC speech where he mentioned the executive order, he brought to the stage Hayden Williams, a conservative activist who was punched in the face while recruiting on the UC Berkeley campus for the conservative youth group Turning Point USA.

Among those invited to the White House event Thursday at 3 p.m. in the Rose Garden is Kristan Hawkins, who is the president of Students for Life of America. Hawkins said her group has met twice with Vice President Mike Pence to tell him about the times their activists have been shut down on college campuses.

“Probably no other campus group has had more free speech issues than the pro-life movement,” Hawkins told POLITICO. “I’m really excited for the spotlight that’s finally being shed on this issue.”

While Republicans have widely criticized colleges and universities for stifling free speech rights on campuses, some conservatives have also cautioned against creating new federal restrictions.

“I do not want to see Congress or the president or the department of anything defining what a speech code should be or should not be, what you can say, or what you shouldn’t,” Senate HELP Chairman Lamar Alexander said in September.

White House officials for months have signaled their plans to craft an executive order on higher education.

Apart from campus free speech, the order on Thursday is expected to include other issues, including a push for student outcome data broken down by academic programs at colleges and universities, according to people familiar with the plan.

DeVos previously announced a plan for the Education Department to detail program-level outcomes, such as graduates’ median debt and median earnings, for all colleges and universities.

Benjamin Wermund and Kimberly Hefling contributed to this report.

Source: https://www.politico.com/story/2019/03/20/trump-free-speech-devos-1230490
Droolin’ Dog sniffed out this story and shared it with you.
The Article Was Written/Published By: mstratford@politico.com (Michael Stratford)

It’s an Elfman party! Who could ask for more? Right now, the great Two Minutes To Late Night series is in Halloween mode. Thus far this month, the series — in which musicians from the worlds of metal, punk, and hardcore come together remotely to cover classic songs — has saluted ghostly jams … More... [...]

Earlier this month, AC/DC officially returned with the announcement of a new album, Power Up, and the release of its lead single “Shot in the Dark.” Today, the band shared its highly-teased music video. Featuring a red background, the clip for the rollicking rocker sees the band performing live and was directed by longtime collaborator David... [...]

On their fourth and best record, the heavy metal duo raise exultant riffs in celebration of perseverance and strength. Read full story on the Bandcamp Daily. Source: https://daily.bandcamp.com/album-of-the-day/spirit-adrift-enlightened-by-eternity-review Indie Brew found this story and shared it with you. The Article Was Written/Published By: Grayson Haver Currinv [...]

Back in May, the Texas singer-songwriter Edith Frost returned with her first bit of new music in 15 years, the Nothing Comes Around EP. Today, she’s back once more with a timely new song called “Little Sign,” which was recorded earlier this year and responds to the climate of 2020. More » Source: https://www.stereogum.com/2103702/edith-frost-little-sign/music/ Indie... [...]

Book Review: Peter Frampton looks back in a gentle memoir

When Peter Frampton was a child, he discovered his father on Christmas morning giving him an acoustic guitar dressed as Santa.” Source: https://www.independent.co.uk/news/book-review-peter-frampton-looks-back-in-a-gentle-memoir-singersongwriter-guitar-guitarist-father-monster-b1348978.html Indie Brew found this story and shared it with you. The Article Was Written/Published By: Via AP news wirev [...]

With just over a week before the U.S. Presidential election, the Foo Fighters brought a stripped-back version of the band’s “Times Like These,” off their 2003’s One by One, to the I Will Vote benefit show to raise funds for the Biden-Harris campaign. The performance featured Dave Grohl at the mic with an acoustic guitar,... [...]