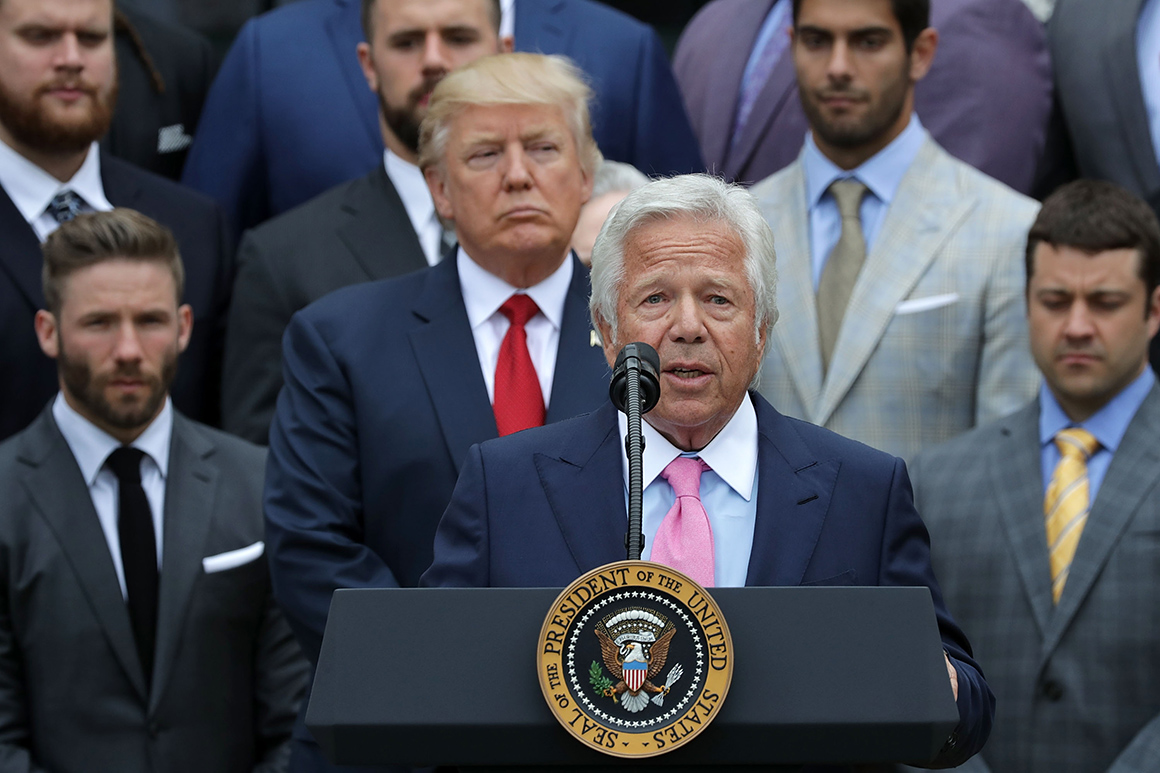 New England Patriots owner Bob Kraft, who was caught up in a Florida prostitution sting last month, may appear at the White House before he appears in court.

President Donald Trump wants Kraft to join his players at the White House this spring for a celebration of their January Super Bowl victory, a prospect that has White House aides worried that it could turn a feel-good photo-op into an embarrassing media spectacle.

Trump has told staffers he wants Kraft there when the reigning NFL champions visit this spring, according to a senior White House official, who said the president and Kraft had spoken since Kraft’s arrest late last month.

The president’s inclination to stand by his longtime friend is in keeping with his practice, while in office, of defending political allies and pals accused of wrongdoing, from former Fox News Channel host Bill O’Reilly in the wake of sexual harassment allegations (“I don’t think Bill did anything wrong”) to failed Alabama Senate candidate Roy Moore following charges that he sexually harassed teenage girls (“He totally denies it”).

The president’s public response to the allegations against Kraft has echoed these remarks.

“He’s proclaimed his innocence totally,” Trump said of his longtime pal, whom local authorities say they videotaped engaging in paid-for sex acts at a day spa in Jupiter, Fla., earlier this year. (“We categorically deny that Mr. Kraft engaged in any illegal activity,” a Patriots spokesman said last month.)

Trump is close to the 77-year-old billionaire Kraft, attending his wife’s funeral in 2011. Kraft went to a White House celebration following his team’s 2017 Super Bowl win and has been a frequent patron at the president’s Mar-a-Lago resort. He even joined Trump and Japanese Prime Minister Shinzo Abe for dinner shortly after Trump took office.

It was not immediately clear whether Kraft, who could not be reached for comment, plans to join his team at the White House if he receives an invitation. The part-time Palm Beach resident clashed with Trump in 2017 when the president attacked NFL players over their protests during the anthem, saying in the midst of the controversy that he was “deeply disappointed by the tone” of Trump’s comments.

Since then, though, the ice has thawed. Kraft appeared on the president’s favorite television show in early February, after the Patriots’ Super Bowl victory, and told the “Fox and Friends” hosts that Trump “is working very hard to serve the best interest of the country.”

Given the charges he currently faces, two White House officials told POLITICO they consider it a bad idea for Trump to host Kraft for a celebratory event at the White House, where it has become customary for presidents to honor championship sports teams. Both of the officials said they’ve refrained from sharing their concerns, however, because the president’s premium on loyalty means he’s likely to invite Kraft regardless of the circumstances.

“This will ultimately be [Trump’s] call,” said a former White House official. “The question is a comms problem about whether or not they want Bob Kraft to be there given all the stuff that went down.”

One White House official said extending an invitation to Kraft soon after he was indicted last month would have been in poor taste, but that waiting to do so in late April or May might save the president some controversy.

“Public memory is so short that inviting Robert Kraft last month would have been not cool. But if [the Patriots] are not going to come until late spring, we’ll have to see what’s going on at that time,” the official said.

“But I would bet that he comes,” the official added. “He’s synonymous with the team. He’s accused, but he hasn’t been convicted.”

Preparations for the Patriots’ visit are being handled by the White House Office of the Public Liaison, which declined to comment for this report. A source familiar with the planning said the department is “in a holding pattern” until an invitation to Kraft is approved or withheld and the team commits to a date.

“In my opinion it’s up to Kraft if he’s willing to come — not on us here to block him,” said the senior White House official.

Prosecutors in Florida offered Kraft a plea deal on Tuesday in exchange for admitting he would likely be found guilty if the case went to trial. The agreement, which Kraft’s attorney has yet to address publicly, would also require Kraft to complete 100 hours of community service and take a course on the dangers of prostitution. An attorney for Kraft could not be reached for comment.

Should Kraft appear at the White House next month, it would likely become the latest in a series of sports-related controversies that Trump has faced since taking office.

Team USA Olympians and athletes from the NBA, MLB and NFL have all declined invitations to the White House, citing their opposition to the Trump administration or to the president’s sharp criticism of players who’ve refused to stand during the national anthem. And earlier this month, Trump came under fire for failing to host solo events for women’s championships sports teams during his two years in office.

Trump also snubbed last year’s Super Bowl champions, the Philadelphia Eagles, just hours before they were scheduled to visit the White House. The president disinvited the entire team after several players said they would skip the ceremony in protest of the president. Trump ultimately held a celebration for Eagles fans without them, but most of the attendees appeared to be government workers.

Three Patriots players — Duron Harmon, and twin brothers Jason and Devin McCourty — have already said they are likely to skip the upcoming White House celebration. “They don’t want me in the White House,” Harmon told TMZ following the team’s 13-3 win in Atlanta last month. Harmon was one of several players, including star quarterback Tom Brady, who was absent from the 2017 Rose Garden ceremony honoring the team.

Source: https://www.politico.com/story/2019/03/20/trump-bob-kraft-visit-1230492
Droolin’ Dog sniffed out this story and shared it with you.
The Article Was Written/Published By: daniel@politico.com (Daniel Lippman)

Pope Francis endorsed gay civil unions for the first time as pope while being interviewed for a feature-length documentary that made its premiere at the Rome Film Festival on Wednesday Source: https://www.independent.co.uk/arts-entertainment/pope-endorses-samesex-civil-unions-in-new-documentary-film-francis-pope-pope-unions-unions-b1205672.html Indie Brew found this story and shared it with you. The Article Was Written/Published By: Via AP news wirev [...]