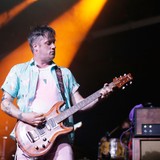 Yesterday, there were reports about several Modest Mouse fans receiving a cryptic package from the band. Now, we know what the packages, which contained a triangular puzzle depicting a psychedelic mushroom, were apparently teasing: two new songs from the group on an exclusive 7″, pressed on a “triangular mint-green” vinyl, to be released on Record Store Day…

Source: https://www.spin.com/2019/03/modest-mouse-new-songs-record-store-day/
Indie Brew found this story and shared it with you.
The Article Was Written/Published By: Israel Daramola

If you pay for a Disney+ subscription, watch it over at a pal’s house, use someone else’s log-in credentials or torrent, you’re likely already aware: the second season of The Mandalorian will be out there and ready to watch on October 30th. — Read the rest Source: https://boingboing.net/2020/10/19/psa-the-mandalorian-season-2-is-almost-here.html Indie Brew found this story and shared... [...]

The London quartet Pynch worked with Dan Carey on last year’s “Disco Lights,” a single on Carey’s Speedy Wunderground label that traversed multiple layers of nostalgia by evoking retro-minded greats like the Strokes, MGMT, Beach Fossils, the War On Drugs, and LCD Soundsystem. They’ve continued tapping that vein on subsequent singles, including the recent “Somebody... [...]

Netflix is a wild ride this week. From the second season of a fan-favorite true-crime series to the return of the Magic School Bus, no two things are alike for streamers. If you’ve been looking for something a bit different than your normal watch, there’s a good chance something coming to Netflix this week fits... [...]

One of the most sought-after classical musicians of his generation returns with a heavier, darker sound. Read full story on the Bandcamp Daily. Source: https://daily.bandcamp.com/album-of-the-day/oliver-coates-skins-n-slime-review Indie Brew found this story and shared it with you. The Article Was Written/Published By: Louis Pattisonv [...]