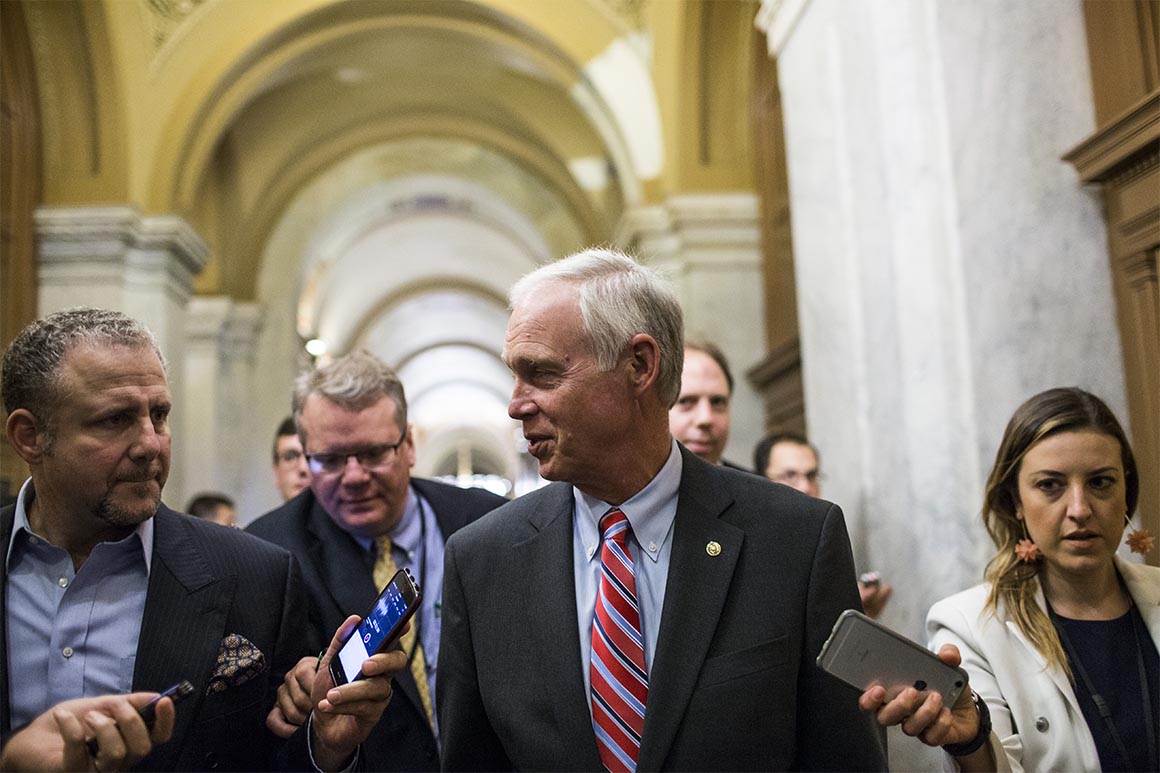 Sen. Ron Johnson made no secret of his displeasure with Donald Trump declaring a national emergency to build his border wall, worrying in late January that the president would take the “Emergency Act beyond where it’s ever been.”

But the Wisconsin Republican has made up his mind when it comes to voting on the House’s disapproval resolution next week. He’s standing with Trump.

“The president’s taking this pretty personally. And in his mind, this is: You’re supporting him or you’re supporting Nancy Pelosi. And I think that’s pretty accurate at this point in time,” Johnson said on Thursday.

Johnson’s pointed defense of the president comes amid a week of growing tension in the Senate Republican caucus about Trump’s plan to shift billions from military construction projects to fund the wall after Congress refused to give him the money.

The president has grown increasingly engaged in the debate, and White House aides have begun dialing up Republican senators to feel them out, putting the squeeze on those who dislike the emergency declaration but want to back the president.

And Trump is starting to make some headway.

Sen. Pat Roberts (R-Kan.) told fellow Republicans on Wednesday that he’d received a call from a White House official over the weekend after the retiring GOP senator had expressed indecision on his stance, according to an attendee and a person familiar with the meeting. The Agriculture Committee chairman recounted out loud to his colleagues that he needs to weigh multiple factors as he assesses his vote, including whether the president will sign agriculture legislation from his committee.

On Thursday afternoon, a spokeswoman said Roberts would support the president on the national emergency, though the senator made his decision independent of conversations with the White House.

While the president initially expressed few concerns with clashing with his party and signing the first veto of his presidency, he has grown increasingly frustrated as the number of Republicans potentially opposing him has ticked up to nearly a dozen. He’s spoken to Senate Majority Leader Mitch McConnell (R-Ky.) about the upcoming vote, and senators acknowledged there’s been an increase in interest from Trump as the number of potential defections has grown.

“The president is paying close attention,” said Sen. John Cornyn (R-Texas), who backs the president. “He wants Republicans to support his position, and clearly some Republicans have some problems with it.”

“They’re looking at it closely,” said Sen. Steve Daines (R-Mont.), who voiced his support for Trump’s position during a party lunch with the vice president last week. “My colleagues are sincerely weighing this vote, and I respect that. But I know the White House is reaching out to know where the senators are at.”

The slow-motion freakout in the Trump administration ahead of a likely vote next Thursday is now beginning to play out, as administration aides talk to senators to understand where they are on the bill. Even senators like Daines who are clearly in step with Trump on the issue have received calls from the White House.

One administration official said there have been “productive” talks with senators about voting with the president in recent days, a stark contrast with the apparent radio silence earlier this week. Trump officials have argued that the emergency money is important because it won’t expire at the end of the year like typical appropriations and that they will somehow “backfill” any affected military projects with new money.

Yet the administration is fumbling on some basic demands from senators, particularly those who want a detailed readout of which projects would be affected by the national emergency. The Defense Department has not yet produced that list, which is making undecided senators nervous about sticking with the president. And it’s raised the prospect of what some Republicans are calling a “jailbreak,” with undecided senators breaking with Trump en masse.

“That’s nothing but a political win [for the Democrats]. Jailbreak is not going to produce a veto override. That’s just a huge messaging win,” said one GOP senator who dislikes the national emergency. “There’s some concern on the White House side that there could be [a jailbreak].”

A Republican senator who has strongly defended Trump on the topic received a phone call this week from White House staff making sure the senator’s position hadn’t changed.

“If they are calling me, that tells me they’re getting more engaged,” the senator said.

In tandem with the White House whipping effort, Senate Republicans are now scouring parliamentary rules to see whether there is a way to blunt the disagreement with the president and vote on something other than the simple House disapproval legislation to block Trump’s emergency.

Johnson is supporting draft legislation with Sen. Mike Lee (R-Utah) that would overhaul the National Emergencies Act so that Congress would have to approve emergencies rather than just give lawmakers a chance to block them. Sen. Pat Toomey (R-Pa.) is working on a resolution that would give Trump border money but would still express discomfort with circumventing Congress.

Whether the Senate will actually be able to vote on either of those proposals was totally unclear as senators left town on Thursday for the weekend. Republicans spent a Thursday lunch debating whether they can find a way to vote on anything other than the House’s simple disapproval bill, but with no resolution, senators said.

“Will there be amendments or will there be adjustments on what came over from the House? So we don’t know,” said undecided Sen. Mitt Romney (R-Utah). “We have to see that before we know precisely how we’re going to vote.”

Amplifying the tension further is that Republicans will likely face another tough vote on ending U.S support for Saudi Arabia’s intervention in Yemen later this month, which could lead to some GOP senators supporting two efforts that will be vetoed by the president.

Amid the rising intraparty tension, some Republicans are eager to play down conflict with the president — even as Trump himself casts the upcoming vote as a critical one and urges Republicans to “stay united.”

“This is not a rebellion,” insisted Sen. John Kennedy (R-La.).

Source: https://www.politico.com/story/2019/03/07/trump-national-emergency-republicans-1211470
Droolin’ Dog sniffed out this story and shared it with you.
The Article Was Written/Published By: ejohnson@politico.com (Eliana Johnson)