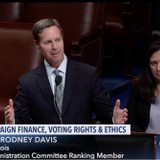 The partisan divide between Democrats and the GOP grew even wider Thursday as two Congressmen had it out over an unforgivable policy position: the Republican’s love of Nickelback. While debating the merits of the Democrats’ H.R. 1 bill—designed to overhaul voting, campaign finance, and ethics laws—Rep. Mark Pocan (D-Wis.) mentioned how only four people out of…

Source: https://www.spin.com/2019/03/nickelback-debate-house-floor/
Indie Brew found this story and shared it with you.
The Article Was Written/Published By: Maggie Serota