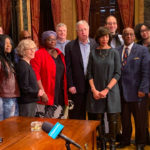 The legislation, known as the Clean Air Act, will impose stricter emissions standards on the facility. By September 2020, its owners will have to begin monitoring and severely restricting emissions of 20 pollutants, including mercury and sulfur dioxide, which can both cause respiratory issues. By January 2020, they will have to comply with regulations on emissions of other chemicals such as nitrogen oxide, which can trigger asthma, cardiac disease, and cancer.

Wheelabrator has said the facility cannot be retrofitted into compliance, so they will be forced to shut it down.

Pugh signed the bill in front of a dozen councilmembers and environmental advocates. “In 1985 this plant was built,” she said. “I don’t know why conversations have to wait so long for things to get done.”

Councilman Ed Reisinger (D-10), the bill’s sponsor, also spoke. “This is the day we’ve been waiting for,” he said.

Last month, the bill passed unanimously through City Council—but not without Wheelabrator putting up a fight. The company bought two full-page ads in the Baltimore Sun and distributed mailers to homes across the city, urging residents to call on City Council to reject the bill.

Mayor Pugh also said some have raised concerns about the bill overwhelming landfills. “People want to complain about whether or not we’ll have enough landfill space to be able to do this,” she said. Last month, she said the city was considering expanding its Quarantine Road Landfill.

Surrounding localities will also have to change their waste management strategies. Currently, half of the trash burned in the Wheelabrator incinerator comes from Baltimore County, Howard County, and Anne Arundel County. “When we remove the other counties…the cost of Baltimore taking care of Baltimore’s waste will certainly be less,” Pugh said at a press conference last month.

She also said the city must employ methods other than landfilling. “The reality is we’ve got to look beyond that. So really develop greening, and cleaning the air for all of our citizens.”

Environmental advocates agree. They say this bill is a step forward in the fight for a zero waste future in Baltimore—one where all materials are recycled or reused. “We need to get curbside composting going, and we need to make sure everyone has free recycling and composting bins, not just free trash bins,” said Ewall.

“We [also] need to adopt what’s known as a unit pricing scheme,” he said, referring to a waste collection method that puts a per-bag price on curbside waste. Ewall has studied the 10,000 communities around the country that employ the strategy, and said it can reduce the amount of waste sent to incinerators or landfills by nearly half in just one week.

After Pugh signed the bill, she stood with councilmembers and advocates for a photograph. Destiny Watford, who led a successful campaign to fight the construction of another Baltimore incinerator, stood to her left. 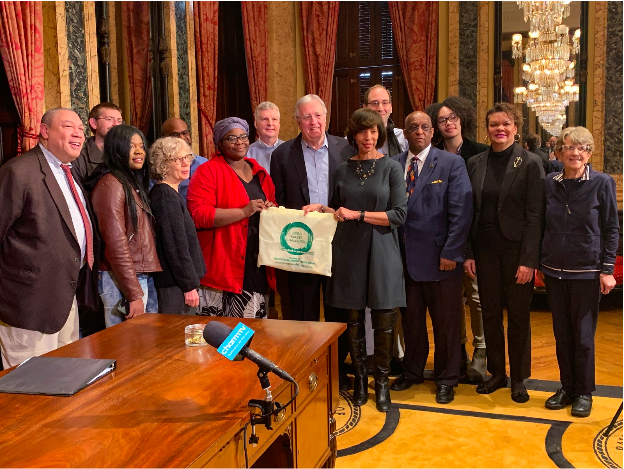 In Annapolis, lawmakers are also considering two separate pieces of legislation that target the Wheelabrator incinerator. The Maryland House will hold a hearing on the Clean Energy Jobs Act {Senate Bill 516/House Bill 1158), which would stop the incinerator from receiving millions of dollars in green subsidies from the state, on Friday, March 7. On the same day, the House Economic Matters Committee will hold a hearing on another bill that would remove subsidies for incineration (House Bill 961/Senate Bill 548) which is backed by a bipartisan coalition.

Wheelabrator was not immediately available for comment for this story.

Source: https://therealnews.com/columns/city-passes-law-that-could-shutter-massive-trash-incinerator
Droolin’ Dog sniffed out this story and shared it with you.
The Article Was Written/Published By: Hezvo Mpunga