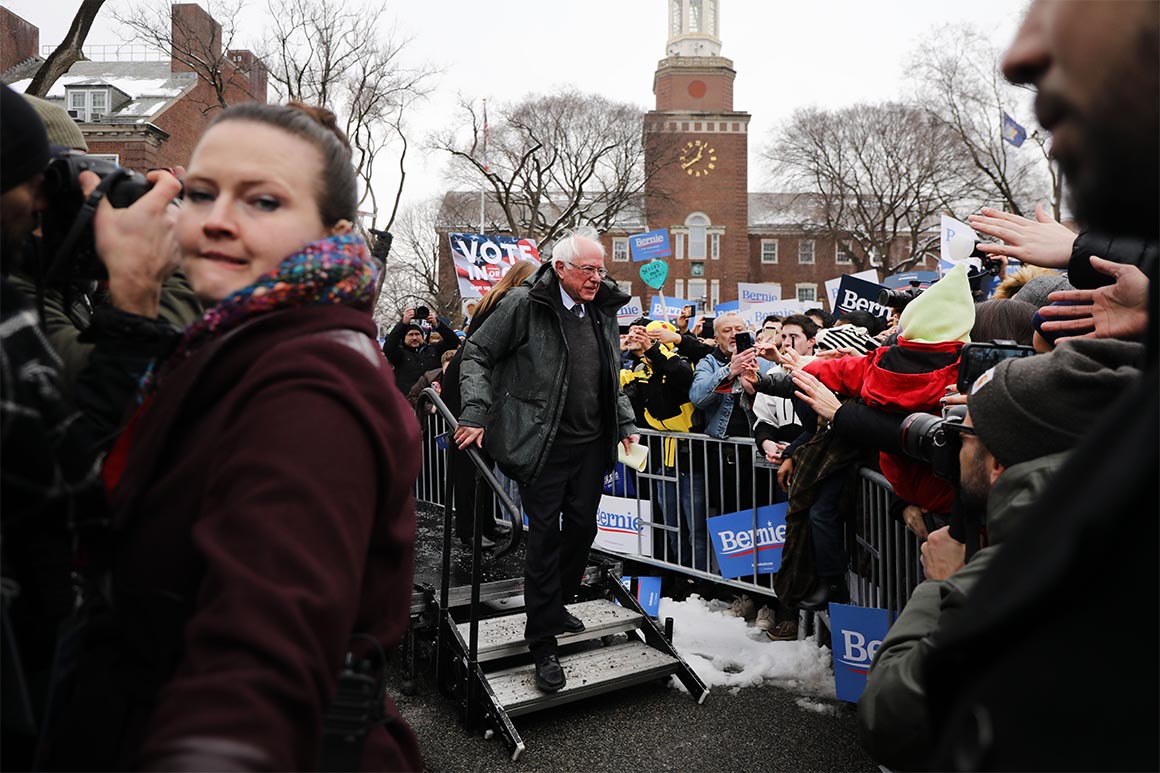 President Donald Trump’s reelection campaign strategy seems like it can be summed up in one word: “SOCIALISM!” With Bernie Sanders, a self-described “democratic socialist,” near the top of many of the early primary polls, and with several other candidates cribbing from his platform and Rep. Alexandria Ocasio-Cortez increasingly driving the policy debate, Republicans are eager to paint the entire Democratic Party pink.

For Republicans to use socialism as their foil presents Sanders with both possibility and peril. He has the opportunity to engage Trump now and prove he can win an argument over socialism, soothing any Democratic anxiety about his electability. But if Sanders can’t satisfactorily respond to Trump’s broadsides, his presidential candidacy will sputter and Democrats will backpedal from his agenda.

Sanders’ typical explanations for his brand of democratic socialism appear insufficient to the task at hand, especially with the political and economic crises in Venezuela helping to return socialism to its “dirty word” status. While Sanders has resuscitated socialism in American political discourse, the ideology remains far from popular. In this week’s NBC/Wall Street Journal poll, only 18 percent of voters view socialism positively, and only 25 percent are “comfortable” or “enthusiastic” about a socialist president.

So Sanders needs to confront the socialism question, starting with a complete separation between his vision and the ruinous reality of Venezuela.

At the Conservative Political Action Conference last week, Trump and his allies gave a preview of how socialism is likely be wielded in 2020. Trump brought the crowd to its feet when he thundered, “America will never be a socialist country. Ever.” Vice President Mike Pence warned, “The moment America becomes a socialist country is the moment that America ceases to be America,” and “If you want socialism, just look at Venezuela.” House Minority Leader Kevin McCarthy stated the strategy plainly: “This election is not going to be about Republican or Democrat. It’s going to be about socialism and the free market.”

While that framing is meant to terrify Democrats, some on the left aren’t quaking. The Nation’s John Nichols argued last month that Sanders’ strong performance in general election trial heats proves that socialism isn’t heavy baggage, thanks to Sanders’ own “aggressive” use of the word to describe his politics. Others contend that, as a slur, socialism has lost its sting from conservative overuse. The Washington Post’s Dave Weigel observed that histrionic claims of socialist takeover have been a staple of CPAC events going back at least 10 years, and socialism has gained traction anyway.

The New Yorker’s Osita Nwanevu suggested that Trump’s anti-socialist tack amounted to a foolish abandonment of his more clever 2016 positioning: “Republicans tried to paint Barack Obama as a far-left radical in 2008 and 2012. They lost both times. In 2016, Trump ran a populist campaign focused on depicting Hillary Clinton as corrupt and, if anything, in the pocket of the international elite. He won.”

If Sanders follows the comforting leftist logic that conservative attacks on socialism are nothing to fear—and he is intrinsically inclined to believe they are not—he won’t see any need to adjust his pitch. But, as recent poor polling for socialism indicates, Sanders shouldn’t be so sanguine. Yes, when Republicans targeted Obama as a socialist, they failed to prevent his election and reelection as president. But that’s because Obama wasn’t a socialist.

Obama bailed out Wall Street and General Motors, but he didn’t nationalize them. His signature health care reform didn’t eliminate private insurers; it ensured them more customers. In Sanders’ case, having presented himself and his ideas as socialism, Republicans won’t even have to bother convincing voters of it.

Yet if Sanders isn’t Barack Obama, he also isn’t Hillary Clinton. He hasn’t spoken at enough private Goldman Sachs lunches for Trump to easily peg him as “in the pocket of the international elite.” Still, Trump isn’t abandoning his right-wing populism when he denigrates socialism. He’s reinforcing it. Trump said to CPAC: “Socialism is not about the environment; it’s not about justice; it is not about virtue. Socialism is about only one thing: It’s called power for the ruling class.” Sanders and his socialist allies may scoff at Trump’s attempt to strip them of their moral authority. But if there’s one thing Trump is good at, it’s gaslighting his way through a scorched-earth political blitz.

Finally, and most important, there is Venezuela, which Trump cited to underscore his “ruling class” point. Venezuela is not only a socialist country in the news for its dictatorial abuses of power, economic calamity and political disintegration. It is also a country of crucial import for perhaps the most important demographic in the 2020 presidential election. For those Latino voters whose families fled socialist dictatorships, particularly in the swing state of Florida, Venezuela viscerally represents what they chose to flee.

Sanders has tried to distance himself and his brand of democratic socialism from Venezuela. In a NBC-Telemundo town hall just before the 2016 Nevada caucus, Sanders was warned by the host that “when some Latinos hear [“democratic socialist”] they think Venezuela and Cuba, [Hugo] Chávez and the Castro brothers, 57 years of dictatorship.” Sanders assured, “I’m not looking at Venezuela. I’m not looking at Cuba. I’m looking at countries like Denmark and Sweden.”

But other remarks by Sanders will complicate his attempt to associate his brand of socialism with Scandinavia, not Latin America. He has taken flak for refusing to label Venezuela’s President Nicolás Maduro as a “dictator.” Granted, Sanders has never endorsed Maduro (though Maduro endorsed Sanders in 2016). Sanders has criticized Maduro for a “violent crackdown on Venezuelan civil society.” He calls the nation’s economy a “disaster.” He supports new internationally supervised elections and sending humanitarian aid, over Maduro’s opposition. But by going out of his way to avoid the term “dictator,” Sanders leaves the impression he does not want to completely undermine Maduro’s political legitimacy, or abet the transfer of power to a more capitalistic successor in Juan Guaidó.

Sanders also had difficulty, during a 2016 primary debate in Florida, explaining his kind words from 1985 about Cuba’s Fidel Castro—who, he said, “educated [parents’] kids, gave their kids health care, totally transformed the society.” At the debate, he declined to express “regret” for the characterization. While he offered “hope” Cuba would become democratic someday, Sanders again praised its “advances” in health care and “progress” on education. That was just a few months after Sanders said he is “not looking at Cuba” when he talks about socialism—and a few days before he lost Florida, and Florida’s Latinos, to Clinton.

In 2020, the attack ads yoking Sanders to Venezuela by way of Cuba (which, some argue, exercises considerable control over Venezuela), won’t be hard to write. The big risk for Sanders is that his typically pat answers to tough questions won’t defuse concerns that he really does like some aspects of Latin American socialism. No matter how much Sanders stresses the “democratic” in democratic socialism, or equates his platform with Scandinavian social democracy, or models himself on Franklin D. Roosevelt, many voters will still fear his presidency, or a successor’s, might end up like Maduro’s.

What can Sanders do that he isn’t already doing, to head off this criticism? He could lead on Venezuela.

Last month, New York Times columnist Jamelle Bouie praised Sanders for developing a “fully formed vision for American foreign policy” that wisely framed the choice as one between “authoritarianism, oligarchy, and kleptocracy” and “democracy, egalitarianism, and economic, social, racial, and environmental justice.” Well, here is Sanders’ chance to embrace that foreign policy vision. Maduro’s Venezuela is the epitome of “authoritarianism, oligarchy, and kleptocracy,” Sanders should treat it as such and forcefully explain what he would do about it. If he can’t, or won’t, maybe his critics are right about his affection for undemocratic socialism.

Sanders should deliver a detailed speech that chronicles exactly where Maduro went wrong, and why he does not deserve the moniker of “socialist.” He should excoriate Venezuela for remaining dependent on oil revenue, creating a rickety economy that harms the planet. He should demand Cuba pull any political advisers and intelligence operatives out of Venezuela. As Sanders is already willing to say Maduro is waging a “violent crackdown on Venezuelan civil society,” he should get over the reluctance to brand him a “dictator,” which would allow him to lacerate Trump for the president’s highly selective opposition to autocrats.

He need not side with Trump and recognize Guaidó’s claim of the Venezuelan presidency, let alone encourage American military intervention. But by restating his support for new elections, Sanders could state flatly that Maduro’s fraudulent election and abuses of power leave him without any democratic legitimacy. In doing so, he would make clear how his vision of democratic socialism does not at all resemble Venezuela, inoculating himself from Trump’s barbs as much as possible, while also showing he is ready to lead on the global stage.

Sanders has been able to improve the image of socialism among left-leaning American voters over the past three years. But has never had to defend socialism in the face of a Republican-led public-opinion carpet-bombing campaign, the kind of permanent conversation on talk radio and Fox News that routinely turns Democratic presidential nominees into caricatures in the public eye. Now that the rhetorical bombs have started dropping on him, it’s time for Sanders to show how he plans to win the war.

Source: https://www.politico.com/magazine/story/2019/03/07/bernie-sanders-socialism-trump-225692
Droolin’ Dog sniffed out this story and shared it with you.
The Article Was Written/Published By: (Bill Scher)