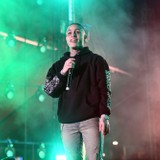 Lil Skies has released a surprise full-length album titled Shelby. Taking its names from the rapper’s mother, the release technically marks the rapper’s studio debut album, despite releasing Life of a Dark Rose in 2017 among a series of earlier mixtapes. “It’s my first real project,” Skies says in a press release. “It’s like a new beginning. This…

Source: https://www.spin.com/2019/03/lil-skies-shelby-stream/
Indie Brew found this story and shared it with you.
The Article Was Written/Published By: Rob Arcand