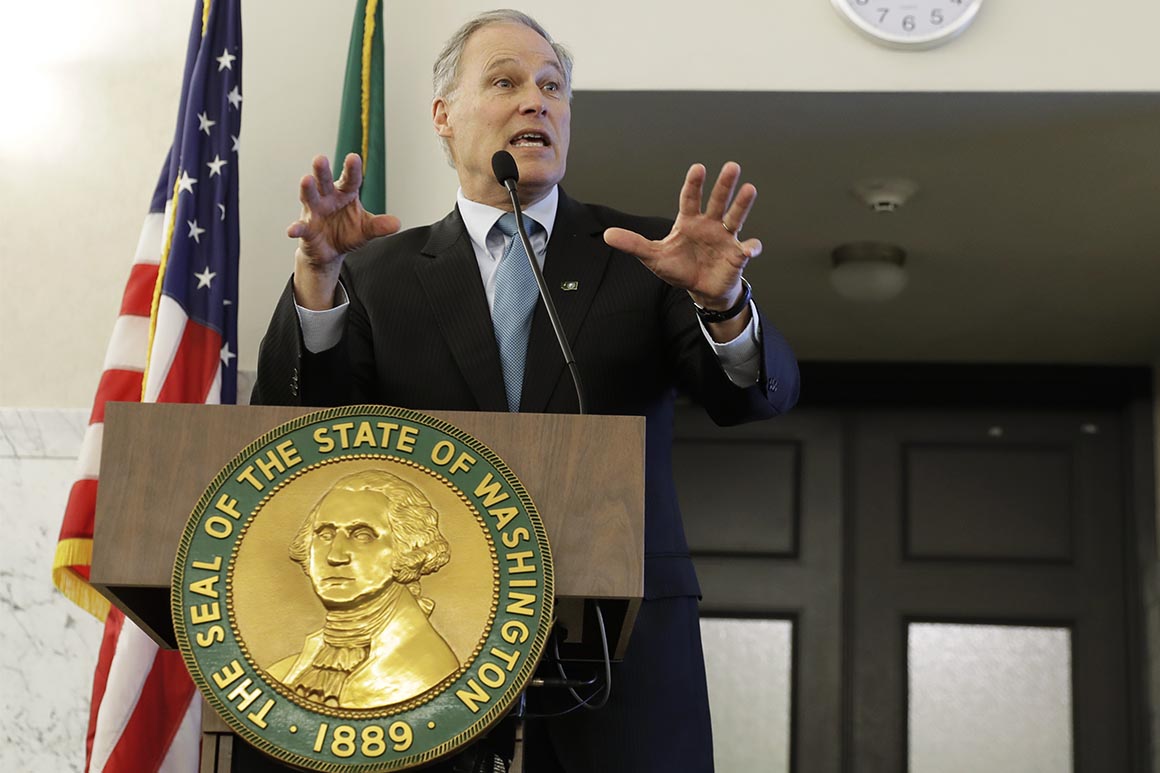 No one has ever won a major statewide race, let alone a presidential nomination, with a single-issue, climate-focused candidacy. But Jay Inslee is about to try.

The Washington state governor launched a White House bid Friday that stands to have a significant effect on the electoral politics surrounding climate change.

For years, despite scientists’ warnings of the calamitous consequences of a warming world, climate change was relegated to a backwater in America’s political campaigns. Presidential candidates rarely mentioned the issue in debates or put money behind it in campaign ads. Even politicians supportive of policies to reduce greenhouse gas emissions largely skirted the issue, convinced it resonated less with voters than healthcare, education or other concerns.

But while Inslee barely registers in presidential polls, the issue that the Washington governor is attempting to corner is showing new signs of traction with likely primary voters. The subtle shift — expressed in public opinion polls and in renewed focus on climate change in the Democratic-controlled House — is providing Inslee a small opening. And it is forcing other, higher-profile Democratic presidential contenders to address climate change more explicitly than in any previous presidential campaign.

Politically, climate change is “in a completely different place,” said Tom Steyer, the billionaire environmentalist and Democratic activist who announced in January that would not run for president. “There was one question asked about climate in the Democratic primary debates and zero in the general election debates in 2016. Are we in a better place than that? … A million times.”

In recent weeks, the introduction of a “Green New Deal” in Congress — a 10-year plan to decarbonize the American economy — refocused public attention on climate change. While Republicans lambasted the nonbinding resolution and welcomed debate on what they framed as a far-left overreach, several Democratic presidential contenders quickly signed on, including Sens. Elizabeth Warren of Massachusetts, Cory Booker of New Jersey, Kamala Harris of California and Kirsten Gillibrand of New York. Michael Bloomberg, the billionaire former New York mayor, has made climate change and gun control the pillars of his platform as he considers a run.

Recent polling suggests Democrats have good reason to campaign on climate — especially in a contested primary. While climate change continues to rank low among concerns of registered voters overall, liberal Democrats listed environmental protection third and global warming fourth among issues of importance in the midterm elections last year, according to a survey by researchers at Yale and George Mason universities.

“It’s a very different environment now than we’ve seen in well over a decade,” said Anthony Leiserowitz, director of the Yale Project on Climate Change Communication. For liberal Democrats, he said, climate change “is a top tier issue, and that is the base of the Democratic Party.”

For climate change activists, the timing of the 2020 campaign appears fortuitous. Trump infuriated Democrats when he announced plans to withdraw from the Paris climate agreement. But the formal withdrawal will not occur until immediately after the 2020 general election, likely forcing the issue back into the presidential debate.

Because of the timing, said R.L. Miller, founder of the super PAC Climate Hawks Vote, “This will literally be a referendum on the place of the United States on climate change in the world.”

If he qualifies for the first Democratic primary debates — likely, given the Democratic National Committee’s relatively low threshold for appearing on stage — Inslee will press the issue. He has laced climate change into every aspect of his campaign — from staffing to finance to policy.

Two of his political advisers — Sky Gallegos and Ben Unger — spent time working for Steyer’s NextGen America group. Some of the major early donors to Inslee’s federal political action committee, Vision PAC, come from the green energy or environmental industry. And where other candidates have written autobiographies, the book Inslee wrote while in political office, “Apollo’s Fire: Igniting America’s Clean Energy Economy,” is about the environment.

And it is not just Inslee raring for a climate debate. A super PAC supporting Inslee, Act Now on Climate, is set to back the Washington governor and emphasize the environment and climate change. But if Inslee drops out of the race, the PAC plans to shift to pressuring other candidates to focus on the issue.

Steyer, a major Democratic donor, said “there’s no way we’d support somebody who wasn’t absolutely crystal clear and credible on climate. If they’re not a climate warrior, we’re not for them. Period. Period, the end.”

Inslee met recently with former California Gov. Jerry Brown, a longtime champion of efforts to address climate change who has run for president three times himself. Ahead of the 2020 election, Brown said he plans to “do some things, do writings and maybe appearances to wake people up and get the topic on the presidential campaign … I do want to get this topic injected into the debate.”

Brown said the timing for climate change as an electoral issue is “getting better because the science keeps getting clearer and more ominous, and more people are responding.” Still, Brown said, climate change is “not the main story yet … No one other than Bloomberg and the governor of Washington have highlighted it.”

“Will the presidential candidates just concentrate on other stuff?” he asked. “Trump and race and gender and single-payer and inequality — those are all issues that are worthy of discussing. But climate change is going to make all of them worse. So, I will do what I can to get it on the agenda. It kind of boggles my mind that it’s getting the rather minimal treatment that it’s getting.”

Inslee is likely to bring a singular focus to the issue. As part of his campaign roll out, Inslee is laying out principles on the environment and climate change that he plans to support. He’s supportive of the principles of a Green New Deal, and Inslee aides are eager to mix his positions on climate change with his tenure as the only sitting governor running in the Democratic primary.

Inslee’s team points out that under his leadership, Washington significantly increased wind and solar energy in the state and quadrupled the number of electric vehicles on the road while overseeing a $100 million investment fund in clean energy development and deployment.

“His credentials on the issue are better than anybody else’s,” said Ron Dotzauer, a Democratic strategist who is based in the Pacific Northwest and is not affiliated with Inslee. “On the environment — not just climate change but on the environmental issues, the green economy, Jay’s been there. He was there before it was politically fashionable.”

Dotzauer added that Inslee is “going to get some environmental money, absolutely, but there’s so many other quote-unquote candidates that also have some quasi environmental credentials, maybe not quite as deep and as broad as his, but at this point they might be considered more viable.”

Inslee’s fortunes may depend on whether he can harness that energy, said Kelly Steele, a Seattle-based veteran of multiple Democratic statewide campaigns.

“He needs to articulate climate and link it back to a broader set of issues in a way that makes it that other candidates can’t simply just check the box,” Steele said.

Less than a year ago, few candidates of either party were focused heavily on climate change, and even Inslee acknowledged, in an interview in September, that the issue was not “predominate” in the midterm elections compared to other campaign themes.

But even in the midterms, there were signs of changing public attitudes about climate. In Southern California’s Orange County, a former Republican stronghold that Democrats seized in 2018, internal focus groups and polling suggested Democrats campaigning on climate change could make inroads with Republican women, according to a source familiar with the public opinion research.

Now-Rep. Harley Rouda, who ran on climate change as an issue in Orange County as early as the primary, said, “I just believe it’s the right thing to do. I truly believe it is the No. 1 issue facing humankind. And while it is difficult to measure on any given day the impact of climate change, the cumulative effect of it is ever increasing, and if we don’t get in front of it, we’re going to be the victim of it.”

As to its salience in 2020, Rouda said, “It’s just simple leadership, having those who are running for or elected to the highest offices in America making this a front and center issue.”

For Inslee, the focus on climate is more than just an exercise in messaging in a crowded field, said Tina Podlodowski, the chairwoman of the Washington Democratic Party, “I think Inslee is really serious about making a shift and thinking about this issue as a lens through which we view other issues moving forward.

Source: https://www.politico.com/story/2019/03/01/jay-inslee-2020-climate-change-1196891
Droolin’ Dog sniffed out this story and shared it with you.
The Article Was Written/Published By: dstrauss@politico.com (Daniel Strauss)