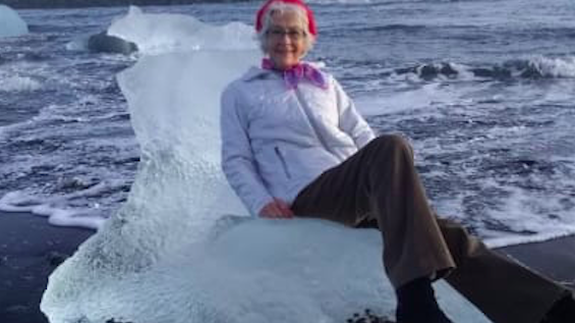 It’s not every day a grandmother is crowned Queen of Icebergs, but when it does happen it’s quite the sight.

On a recent trip to Iceland, Judith Streng became that grandma after her son attempted to take a photograph of her sitting on an ice structure that resembled a throne at Diamond Beach in Jökulsárlón.Shortly after Streng sat down to pose, the piece of ice broke off and floated into the water.

“When I got on it, it started to totter and a wave was coming in,” Streng told ABC News. “A very large wave came in and kind of made the throne kind of rock, and I could tell that I was slipping off.”  Read more… Source: https://mashable.com/article/grandma-floated-out-to-sea-ice-throne/
Droolin’ Dog sniffed out this story and shared it with you.
The Article Was Written/Published By: Nicole Gallucci