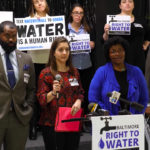 Maryland’s House of Delegates unanimously (138-0) approved on Thursday a bill to stop Baltimore residents from losing their homes and churches at tax sale due to debt from unpaid water bills. The legislation seeks to completely remove water bills from the tax sale process. But as first reported in the Baltimore Fishbowl, amendments issued by the Ways and Means Committee on Tuesday limit the legislation’s power–amendments that Mosby and advocates had not previously noticed.

Last year, Maryland passed a one-year moratorium on sending owner-occupied properties to tax sale over unpaid water bills. Mosby’s bill and its Senate counterpart, sponsored by Senator Mary Washington, sought to extend protections to not only homeowners, but also to renters and places of worship. But the Ways and Means Committee’s amendments limit those protections to renters and places of worship with exclusively water bills unpaid, allowing water bills to compound with other outstanding bills or fees to trigger tax sale.

“[The amendments] give the city the authority to sweep water bills in with other outstanding fines,” said Rianna Eckel, Maryland Organizer with Food and Water Watch. “This means that some people will still lose their property over water bills. If someone owes $10 from an environmental citation, and $740 in outstanding water bills, they could still go to tax sale.”

She says it seems the Ways and Means Committee issued these limitations unintentionally. “It appears to be a legislative mistake [that came from] referencing a former piece of code,” she said.

This comes after the Baltimore Delegation of the Maryland General Assembly approved the original versions of Mosby’s and Washington’s legislation. In February, Baltimore Mayor Catherine Pugh’s office suggested amendments to further weaken the bill, but retracted them in the following weeks.

Food and Water Watch and other advocacy groups had initially celebrated the bill’s passage on Thursday. “Thanks to the leadership of Delegate Mosby, we are closer to ending this practice for good,” said Brooke Harper, Political Action Chair of the NAACP Maryland, in a statement. But the amendments put a damper on advocates’ enthusiasm.

Victory in Maryland! The House of Delegates unanimously passed legislation that would remove water bills from the tax sale process for residential properties & places of worship in Baltimore! #WaterIsAHumanRight https://t.co/AlGVMB9YNm

Eckel says that now, Food and Water Watch and others will work to remove the amendments. “We’re working with the sponsors, Delegate Mosby and Senator Washington, to fix this error and bring justice to families facing tax sale for water bills,” said Eckel.

She says that in the face of rising water bills which in some cases are erroneously high, the protections this legislation would instate are urgent.

“Water bills have become an enormous burden on Baltimore’s families,” she said. “Nobody should ever have tax sale triggered over a water bill. The bill as passed will still protect thousands of families from facing tax sale over water bills, but it doesn’t protect everyone.”

Source: https://therealnews.com/columns/amendments-limit-bill-to-stop-baltimoreans-from-losing-homes-and-churches-over-unpaid-water-bills
Droolin’ Dog sniffed out this story and shared it with you.
The Article Was Written/Published By: Hezvo Mpunga