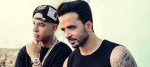 Luis Fonsi and Daddy Yankee’s ‘Despacito’ may have been released more than two years ago now, but it’s still setting new records on YouTube. The original music video for the track, released in January 2017, has just passed the milestone of 6bn views. It’s the first video of any kind (i.e. not just music) to have […]

Source: https://musically.com/2019/02/26/despacito-becomes-first-video-to-reach-6bn-youtube-views/
Indie Brew found this story and shared it with you.
The Article Was Written/Published By: Stuart Dredge