On the heels of news that TikTok has reached 1 billion downloads, the company today is launching new initiative designed to help inform users about online safety, TikTok’s various privacy settings and other controls they can use within its app, and more. Instead of dumping this information in an in-app FAQ or help documentation, the company will release a series of video tutorials that are meant to be engaging and fun, in order to better resemble the other content on TikTok itself.

The safety series, called “You’re in Control,” will star TikTok users and will make use of popular memes, in-app editing tricks and other effects, just like other TikTok videos do.

The videos will focus on a range of privacy, safety and well-being settings and other safety-related policies. This includes TikTok’s Community Guidelines, how in-app reporting works, plus other settings for protecting your privacy, control comments, those to manage your screen time, and more.

They’re not exactly your traditional how-to videos, however.

Instead, the videos showcase what’s often a more serious issues – like being overrun with unwanted messages – in a humorous fashion. For example, in the video about configuring your message controls, angry commenters are depicted as shouting passengers on an airplane while the user is depicted by an overwhelmed flight attendant. “Too many DMs?,” the video asks. The flight attendant snaps his fingers, which causes most of the passengers to disappear. The scene returns to peace and quiet. It’s a simple enough analogy for TikTok’s younger user base to understand.

This is then followed by a screen recording that shows you how to turn off messaging within the TikTok app’s settings.

Other videos have a similar style.

A barking, growling dog is used to demonstrate Restricted Mode, for instance. A noisy crowd overlooking someone’s shoulder is the intro on the video about using comment controls.

Another video encourages the use of screen time controls, asking “can’t put your phone down?” and shows someone so wrapped up in their phone they aren’t watching where they’re walking.

But the video about the Community Guidelines is maybe the most cringe-y, as it feels a bit like your parents reminding you to “play nice.” However, it still manages to set a tone for what TikTok wants to promote – a community for “positive vibes” where everyone feels “safe and comfortable.” At launch, there are seven of these short-form videos in the safety series, which will launch in the TikTok app in the U.S. and U.K on Wednesday. In time, the company plans to add other tutorials and expand the series across its global markets, it says.

Of course, TikTok needs more than a series of videos to make its app a safe and welcoming community, the way it desires. It also needs a combination of policies, settings, controls, technology, moderation, and more, the company says.

That said, a focus on user education is an important aspect to this larger goal – and it stands in stark contrast to how Facebook intentionally made its privacy settings so complex and difficult to find and use for so many of its earlier years, that people gave up trying.

How well TikTok can execute on user privacy and safety as the app grows still remains to be seen. For now, it tends to be talked about as either a wholesome and fun video experience, or an online cesspool filled with hateful content and child predators. It’s an app on the internet, so both versions of this story are likely true.

There is no large user-generated content site – even those run by Facebook, Twitter, and YouTube – that has figured how to properly police the hatefulness and evil contained in humanity. But TikTok, at least, takes care not to showcase that content in its main feed – you have to seek it out directly (or train its algorithm by never clicking on anything wholesome.)

But, so far, TikTok has been better reviewed by child safety advocates than you might expect. For instance, Common Sense Media – a nonprofit that provides unbiased and trusted advice about all sorts of media, including apps – said that the app, used with parental supervision, can be “a kid-friendly experience.” 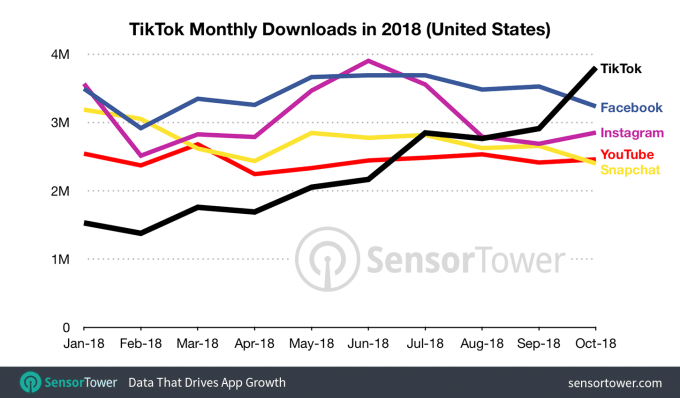 The launch of the video series comes at a time when TikTok’s growth is surging. The app recently surpassed a billion installs across the iOS App Store and Google Play, including Lite versions and regional variations, but excluding Android installs in China, according to data from Sensor Tower.

Roughly 25 percent of those installs are from India, the report said. And around 663 million of TikTok’s total installs occurred in 2018, which made the app the No. 4 most downloaded non-game for the year.

However, installs alone don’t tell the story of how many people actually use the app or how often. And a chunk of these could be the same user installing the app on multiple devices, or even bots used to push the app up the charts. In addition, parents often download the app their tween or teen is using for monitoring purposes, but don’t engage with the app or its content on a regular basis.

Source: https://techcrunch.com/2019/02/27/tiktok-is-launching-a-series-of-online-safety-videos-in-its-app/
Proactive Computing found this story and shared it with you.
The Article Was Written/Published By: Sarah Perez