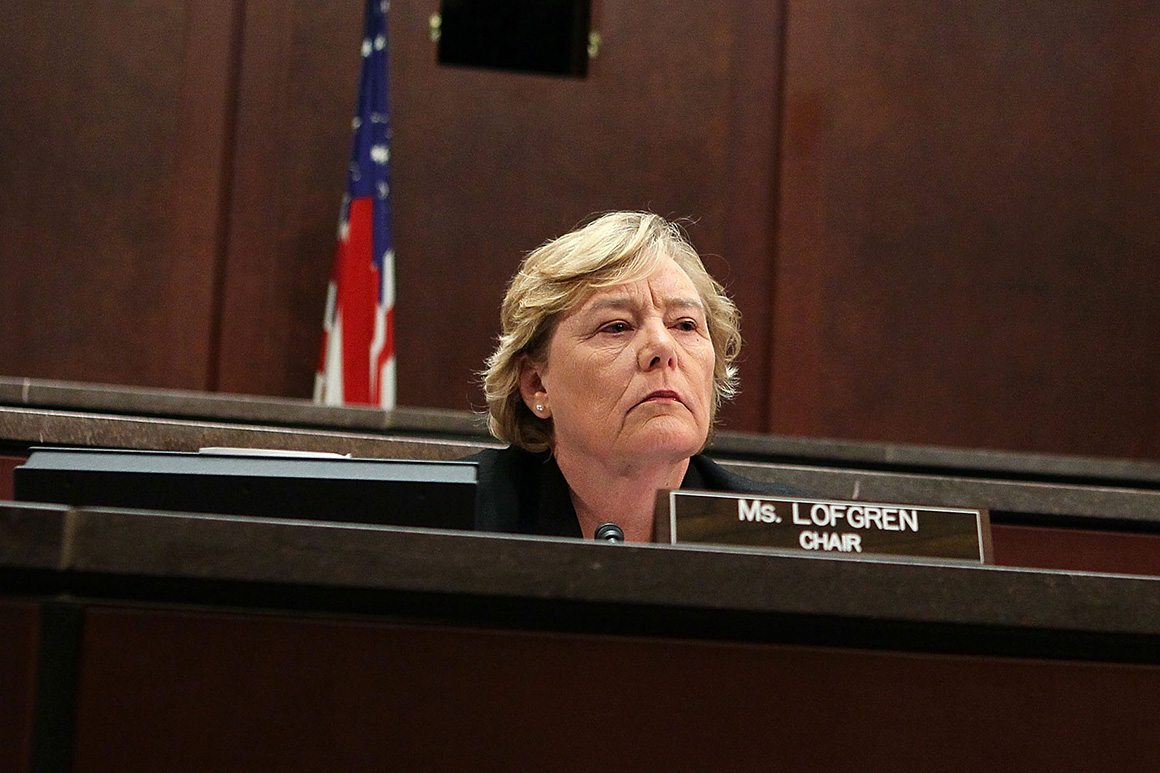 The House Administration Committee approved the bill — known as H.R. 1, or the “For the People Act” — by a 6-3, party-line vote.

“H.R. 1 makes it easier, not harder, to vote,” Rep. Zoe Lofgren (D-Calif.), the committee chair, said at the hearing. “It ends the dominance of big money in our politics. It ensures public officials work in the public interest.”

It is expected to come to the House floor in the coming weeks, according to a Democratic aide familiar with the proceedings and End Citizens United Executive Director Tiffany Muller, whose organization has been strongly pushing the legislation. The Democratic aide spoke on the condition of anonymity because the floor schedule for next week has not been finalized.

The bill will likely pass the House, having already secured 227 co-sponsors, all Democrats.

During the hearing, ranking member Rodney Davis (R-Ill.) and other Republicans bemoaned the speed with which the bill was headed to the floor, saying Republicans have not had a chance to work on the bill and that state election officials were not adequately consulted.

“This bill is being rushed to the floor of the House for political reasons instead of good policy,” Davis said. “I’m for open processes. You know what? This is an epiphany. All of you who said we didn’t have enough hearings on the tax bill or the health care bill? You were right. You were right! Why are you doing the same thing to us, when you take control?”

Some provisions are seemingly targeted at President Donald Trump. One such provision would force presidential inaugural committees to disclose expenditures and another would require presidential and vice presidential candidates to publicly disclose 10 years worth of tax returns.

Republicans introduced 28 amendments throughout the hearing, all of which failed on a party-line votes.

Many of the Republicans’ amendments sought to strike provisions from the bill, saying parts of H.R. 1 amounts to federal overreach, while also raising concerns that the cost of the bill was unknown.

“H.R. 1 is a prime example of the Democratic party telling states that the federal government knows better than they do,” Davis said.

One of the most contentious amendments, introduced by Rep. Mark Walker (R-N.C.), would prohibit the practice of “ballot harvesting” — where third party groups collect absentee ballots and turn them in. It is illegal in some states like North Carolina, and legal in others, such as California. House Minority Leader Kevin McCarthy (R-Calif.) has previously blamed ballot harvesting for the GOP’s near wipeout in the Golden State.

“Most recently, we saw a new election ordered in North Carolina due to ballot harvesting allegations,” Walker said, introducing the amendment, referring to allegations of election fraud in North Carolina’s 9th District. In the district, a contractor for Republican Mark Harris both illegally collected and manipulated absentee ballots.

“I hate to break it to everybody, but that’s just not going to be relegated to North Carolina,” Davis said. “If you want to federalize everything else, why wouldn’t we stop this process?”

Democrats pushed back, saying Republicans were conflating a bad actor in North Carolina manipulating ballots with California voters being allowed to cast absentee ballots by mail up until Election Day, and the work of groups legitimately submitting ballots.

“I think the amendment to some extent, is illogical,” Lofgren said. “There have been no credible reports of fraudulent or otherwise illegal [activities] in California. I understand that many people outside of California were perplexed about why the count took so long. Those of us in California know why.”

The bill now heads to the Senate, where it will likely die. Senate Majority Leader Mitch McConnell (R-Ky.) has given several floor speeches opposing the bill, as well as writing an op-ed in The Washington Post decrying the bill as the “Democrat[ic] Politician Protection Act.”

The companion Senate bill is still being worked on, according to Muller, the ECU executive director. She told reporters Tuesday that she expected several potential 2020 presidential contenders in the upper chamber to sign on as co-sponsors.

And Democrats plan to hammer Republicans over the bill’s presumed failure. Many freshmen House Democrats ran on government reform in the midterms and expect the issue to be salient on the campaign trail in 2020.

“H.R. 1 is not going to be a flash in the pan,” freshman Rep. Max Rose (D-N.Y.) said earlier on Tuesday. “We’re going to constantly, constantly put before them the question of, ‘Whose side are you on?’”

“I think there is a sentiment in this town right now that, ‘We just got to get past this H.R. 1 s—, and then we can go back to normal order,’” Rose added. “No, there’s no going back. You’re not going to be escaping this because that’s our responsibility to the American people.”

Source: https://www.politico.com/story/2019/02/26/democrats-electoral-reform-bill-1188437
Droolin’ Dog sniffed out this story and shared it with you.
The Article Was Written/Published By: zmontellaro@politico.com (Zach Montellaro)