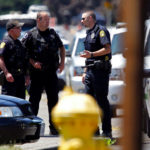 As Baltimore faces another uptick in shootings and violent crimes, officials are considering arming police officers to make schools safer.

After a shooting at Frederick Douglass high school that left one staffer injured, the Baltimore School Board is considering whether to support a bill that would allow school police officers to be armed during the school day.

On Tuesday, Feb. 25, Baltimore City’s school board will reconsider the measure after originally voting unanimously against it on Jan. 23. During that hearing, students from the Baltimore Algebra Project took over the meeting to urge the school board to vote down the measure. You can watch the full Real News report below.

School police officers, their union, and some community members support the measure, saying it will help keep schools safe. But critics warn armed officers would have a disproportionately negative impact on students of color.

Baltimore public school parent and advocate Melissa Schober offers a detailed accounting of the troubled history of school police in Baltimore and across the nation.“There is no empirical evidence that an armed [school police] has any effect,” she writes.

A 2015 Harvard study found that Baltimore offers the worst opportunities for income mobility for poor and black residents. Researchers found every year of growing up in Baltimore resulted in a nearly 1% decrease in lifetime earnings.

State commissioned studies found that Baltimore schools are underfunded by $250-$400 million a year, or $2 billion over the past two decades. That’s in addition to a nearly $3 billion construction backlog. While some new schools are being built as part of the 21st Century Plan, many of the remaining buildings have been neglected for decades and need millions in dollars in upgrades and repairs.

Meanwhile, legislators in Annapolis are considering whether to allow Johns Hopkins University to obtain an armed, private police force. On Friday, legislators heard hours of testimony for and against the measure.

Hopkins president Ron Daniels argues that experts have called the new Hopkins bill the most “rigorous, accountable, transparent, and progressive” in Maryland and among U.S. universities.

.@BUILDBaltimore speaks out in favor of a Hopkins police force, say public safety is most important. Build has worked with Hopkins to make police force more accountable, and they will continue to hold Hopkins accountable pic.twitter.com/yfwXz9LPbm

Legislators asked Hopkins officials tough questions about their proposal. “Our public safety challenges are rooted in historic, systemic racism. Policing isn’t a solution to that,” asked Baltimore Delegate Robbyn Lewis . “What alternatives have been considered?”

.@RobbynLewis46th questions @VPSecurityHyatt and @JohnsHopkins President Ron Daniels: “Our public safety challenges are rooted in historic, systemic racism. Policing isn’t a solution to that. What alternatives have been considered?” (from ~57mins in) pic.twitter.com/wBCU5mRV9d

Dozens of students, community organizations, and neighborhood residents testified against the measure. “Despite the prolific scientific and medical advances that have come through its walls, Hopkins has a history of systematically neglecting and exploiting the community that houses it,” said Hopkins student Max White, who, in his testimony, listed the historic injustices carried out by Hopkins towards Baltimore residents.

Chisom Okereke, president of the Hopkins Black Student Union, also warned of the negative impact of armed police towards African American students and community members in her testimony. Okereke recently told The Real News “I’ve constantly seen my peers, my friends, myself being targeted by the already present law enforcement … ….it’s scary to think that that could be weaponized and be turned into a matter of life and death,” she said.

The post Will Militarizing Schools Make Them Safer? appeared first on The Real News Network.

Source: https://therealnews.com/columns/will-militarizing-schools-make-them-safer
Droolin’ Dog sniffed out this story and shared it with you.
The Article Was Written/Published By: Hezvo Mpunga