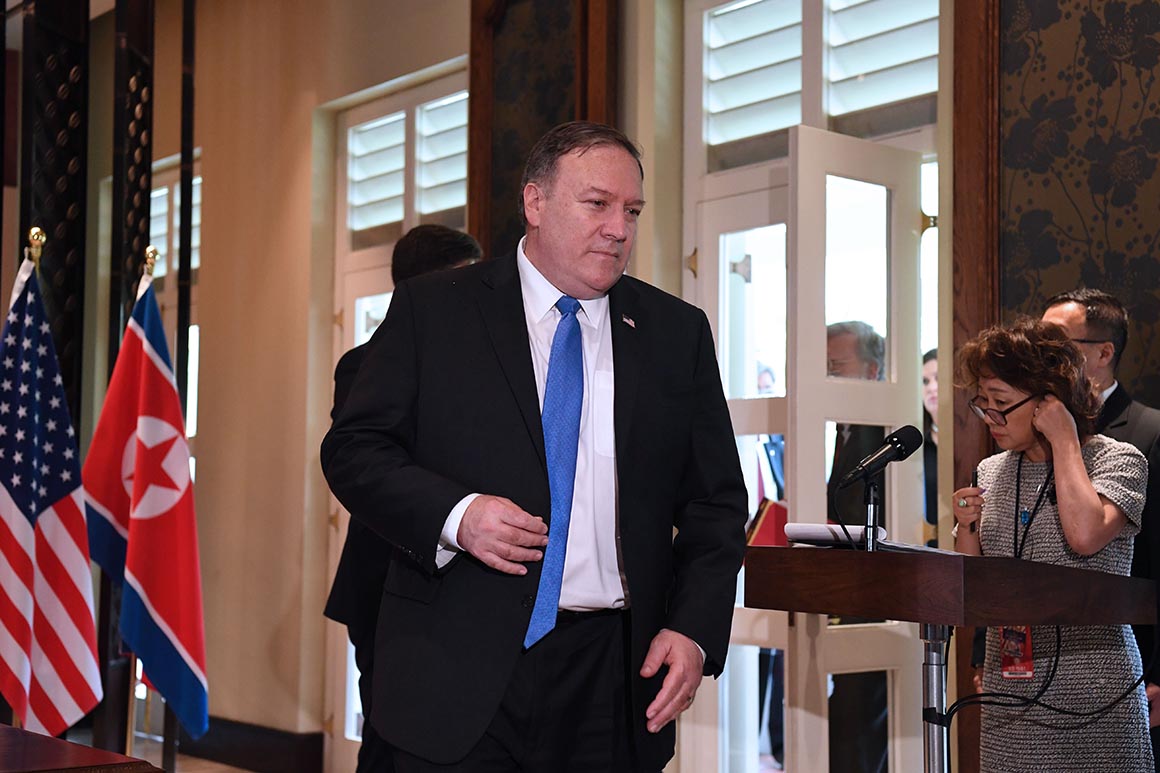 Secretary of State Mike Pompeo was recently asked why the Trump administration was engaging North Korea in nuclear talks without preconditions but had imposed no less than 12 conditions before it would negotiate a new nuclear deal with Tehran? Pompeo replied that the situations are different because North Korea has nuclear weapons and Iran does not.

Then, he said: “Remember too, North Korea behaves very differently. They’re not destabilizing Yemen. They’re not destabilizing Syria. They’re not conducting enormous assassination campaigns. These countries’ behaviors are different, therefore, the way America is approaching resolving this.” When pressed about human rights violations in North Korea, he said “we talk about them with great frequency, the same way we talk about human rights violations in every country in which we find them.”

It was an extraordinary statement. Set aside the perverse incentive that countries with nuclear weapons will receive preferential treatment from the United States. Pompeo was rewriting history to sanitize the North Korean regime. The secretary of state should refresh his memory:

And that’s just a partial list of what it does internationally. Its human rights record at home is abysmal. The United Nations estimates that the regime holds between 80,000 and 120,000 people in its gulags, called kwanliso. According to the International Bar Association War Crimes Committee, in these prisons, the North Korean regime has carried out 10 of the 11 crimes against humanity enumerated in the Rome Statute of the International Criminal Court.

Diplomacy does not become a bad idea because North Korea is a bad actor. But a diplomatic failure becomes more likely if we lose sight of the type of regime we are dealing with.

There are worrying signs that in its efforts to claim that the talks are making progress,, the Trump administration is turning a blind eye to North Korea’s nefarious activities. Pompeo has reacted angrily to basic questions from journalists about the lack of progress on denuclearization. President Trump has dismissed evidence that North Korea has continued to work on its missile program and he has dramatically lowered the bar for a deal. .

When you peel away the rhetoric, the administration’s policy to North Korea comes down to a practical understanding: You stop testing missiles and nuclear bombs and we will pretend everything is fine. Indeed, the president has now acknowledged this, telling the press “There’s no testing. As long as there is no testing, I’m in no rush. If there’s testing, that’s another deal.”

For some observers, this is better than the alternative. At least the two sides are talking. Or so the argument goes. But a failure to hold North Korea to account gives it a license to continue its destabilizing activities. If the United States can no longer acknowledge North Korea is a rogue actor at a time when it is seeking leverage, how likely is it to do so after a deal is signed?

The Trump administration is gaining a reputation for naively accepting the word of autocrats as long as they are not Iranian or Venezuelan. It has given Saudi Arabia a free pass on the murder of Jamal Khashoggi and Hungary a pass on the erosion of democratic institutions. This is a bad strategy for America in the world. It is particularly damaging in the case of North Korea.

Thae Yong-ho, one of the most senior diplomats ever to defect from Pyongyang, recently claimed in Seoul that Trump is falling into a trap laid by Kim Jong-un that seeks to persuade him to accept North Korea as a de facto nuclear power. All of the evidence suggests North Korea is not going to denuclearize. The question is how to deal with it. So the strategic flaw in Trump’s North Korea policy is that it takes the pressure off while leaving it up to Kim to decide whether to renew testing or regional aggression when it works to his advantage.

The alternative is not a ruinous conflict, as Trump has suggested. The alternative is to put in place a system that provides a robust counterweight if and when Kim decides to take such a path, as history suggests he will. This means working with America’s allies, bolstering the U.S. presence in the region and maintaining pressure on Kim while continuing to talk to the regime. Unfortunately, the administration seems determined to diminish this robust counterweight, marginalize its ally Japan, throw away much of its leverage and simply trust Kim to keep his word.

If the United States is to avoid the mistakes of the past, as Secretary Pompeo has promised, the administration must be clear-eyed about the challenge and not deluded into thinking that Kim Jong-un has fundamentally changed.

Source: https://www.politico.com/magazine/story/2019/02/25/mike-pompeo-north-korea-human-rights-225206
Droolin’ Dog sniffed out this story and shared it with you.
The Article Was Written/Published By: Thomas Wright