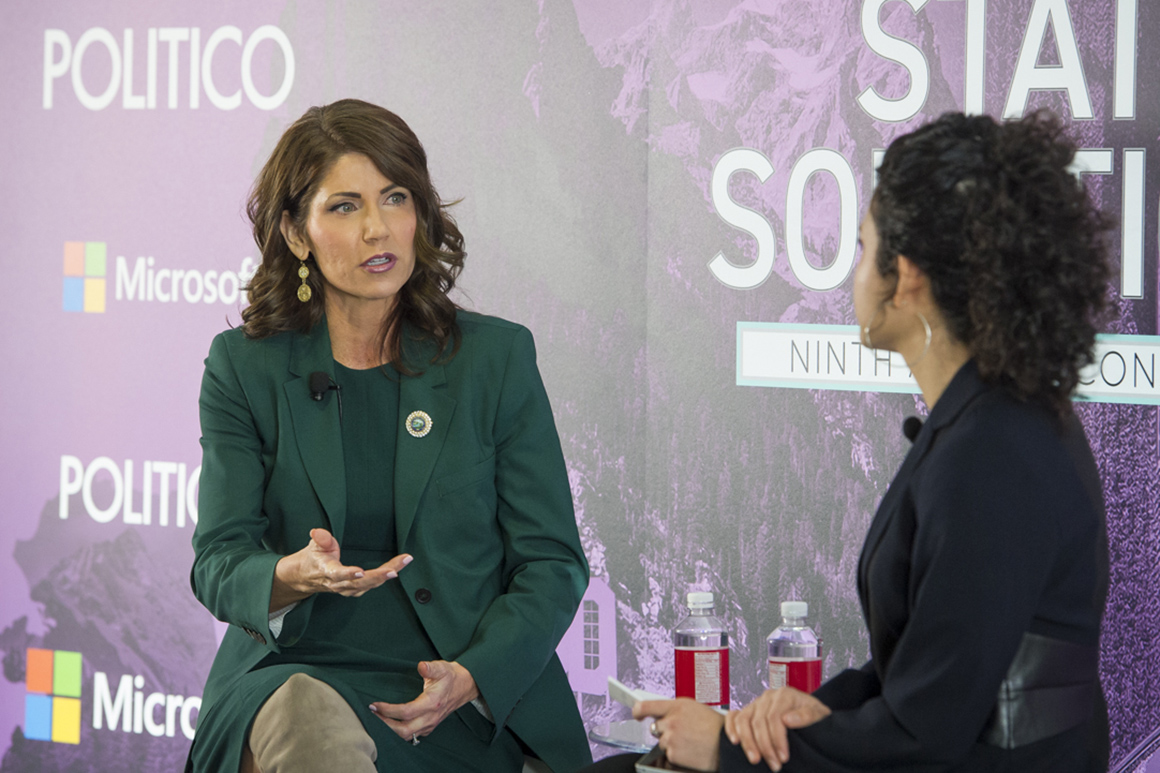 South Dakota Gov. Kristi Noem said Friday that President Donald Trump’s trade wars have “devastated” her state, and though she agreed that countries like China were not following fair trade practices, she urged the Trump administration to quickly wrap up its trade talks there.

“South Dakota has been devastated by the trade wars that are going on,” Noem said at POLITICO’s State Solutions Conference, noting that agriculture is “by far” the largest industry in the state. The Republican governor warned that the trade woes of farmers can trickle down to the rest of the state, impacting “every main street business, everybody that has another entity out there that relies on a successful ag industry.”

President Donald Trump has engaged in a tit-for-tat war with U.S. trade partners like China and the European Union, which have levied retaliatory tariffs on major U.S. commodities like soybeans and wheat. The White House has been in talks with China for months over the issue, and faces a self-imposed deadline of next Friday to reach an agreement before tariff rates increase drastically.

Noem allowed that countries like China had engaged in unfair trade practices and said she realized the Trump administration “is trying to rectify that,” but said the clash had gone on too long.

“I have consistently been an advocate for wrapping up these trade discussions and making sure we’re getting access to better markets,” she said Friday, adding that “I think the administration wants to do this, we have been treated unfairly in the past, and they recognize that and want to have better trade agreements.”

The former congresswoman said that she has spoken to the White House in recent days and plans to engage them on the issue again while she’s in town for the Republican Governors Association winter meeting this week.

“The problem is that this has gone on now for a long period of time,” she said. “And farmers are used to risk, they’re used to prices going up and down and having that, but this sustained low commodity prices, frankly, is driving a lot of family businesses out of business. That is why we need to have some serious consideration for wrapping this up quickly.”

Source: https://www.politico.com/story/2019/02/22/trump-trade-south-dakota-1180196
Droolin’ Dog sniffed out this story and shared it with you.
The Article Was Written/Published By: coprysko@politico.com (Caitlin Oprysko)