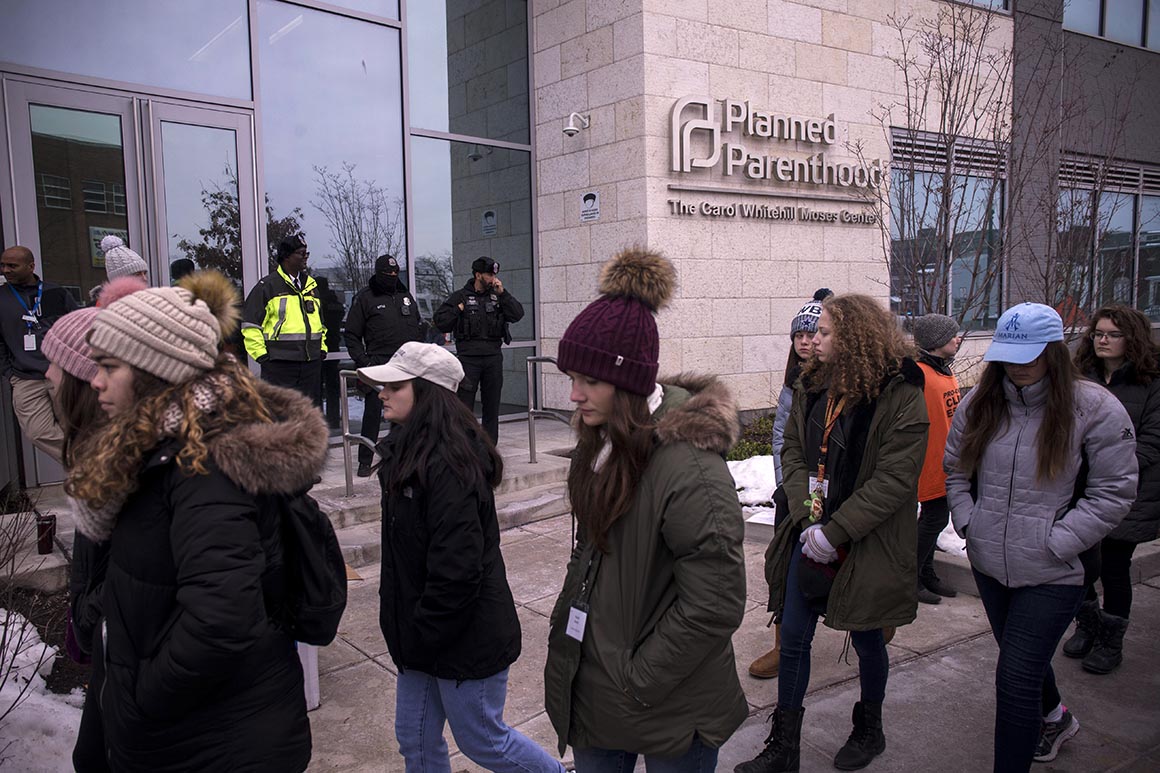 The Trump administration’s overhaul of a federal family planning program is opening a new front in the abortion wars on a divided Capitol Hill.

A rule the administration released Friday will effectively cut off tens of millions of dollars to Planned Parenthood and other clinics that offer abortions, while steering some of that Title X federal funding toward anti-abortion, faith-based care providers. It’s not the all-out defunding of Planned Parenthood that the Republicans have long sought, but it’s unacceptable to Democrats with new authority over health care and federal spending.

“I am committed to fighting the implementation of this rule,” said Rep. Rosa DeLauro (D-Conn.), who leads the House’s health care appropriations subcommittee.

“We’re in the majority now and we have a lot of people in key positions,” said Rep. Judy Chu (D-Calif.), who chairs the contraception and family planning task force of the House Pro Choice Caucus, speaking about Democrats’ broader reproductive rights agenda. “We’re going to interject ourselves into the appropriations process.”

But in the face of a divided government, both sides admit the next two years will largely be a fight to preserve the status quo and rally their bases on the divisive issue ahead of the 2020 election. While House Democrats publicly aspire to “systemically” reverse many abortion restrictions on the books, they say they’ll mainly focus on preventing Republicans from imposing new ones.

“Stopping things is going to be the priority,” said Sen. Patty Murray (D-Wash.), the top Democrat on the Senate Health, Education, Labor and Pensions Committee. “We have lived through two years of constant attacks on so many aspects of women’s health and economic security — on Planned Parenthood, Title X, the [Affordable Care Act]. Now that we have a Democratic House, we have a much better break on it.”

But when it comes to the new Title X rule, Democrats’ options to stop the administration are extremely limited.

The rule will be challenged in court, and precedent is on the Trump administration’s side. The Supreme Court upheld similar funding restrictions in 1991, but they were never fully enacted before the Clinton administration rescinded them the following year.

The Department of Health and Human Services said the new rule is grounded in a longstanding federal ban on abortion funding. “From the start, Congress was clear that Title X funds cannot be used to support abortion,” HHS said.

While federal law bars funding for abortion, except in limited cases, abortion providers have long received Title X funds for other services, like contraception.

Rep. Frank Pallone (D-N.J.), chair of the House Energy and Commerce Committee, vowed Friday to “fight to protect and support” the Title X program, calling the new rule “another blatant attack on women’s health by the Trump Administration that violates the Title X statute and defies Congressional intent.”

House Democrats could try to redirect Title X funds to Planned Parenthood and abortion clinics through an annual appropriations bill, but the Republican majority in the Senate has signaled they will reject those efforts and President Donald Trump has already vowed a veto. Well aware of this dynamic, senior House Democratic aides said the caucus isn’t likely to wage a fruitless battle on the issue if that would mean risking another government shutdown later this year.

“We will work to promote women’s access to reproductive health care while remaining mindful of the political reality that the Senate and President remain in anti-choice hands,” an aide told POLITICO.

The strategy falls short of the sweeping overhaul of abortion rights that the Democratic Party’s most progressive members promised in their health care-centric fight to take back the House in 2018. Still, lawmakers insist they’ll explore all the legislative tools now available to them — including hearings and subpoenas — to push back against not just the Title X rule but any legislation or policy rider that would impose new abortion restrictions.

The political stakes are just as high for Republicans, who during the last two years failed to fulfill their base’s demands to defund Planned Parenthood, pass a 20-week abortion ban or significantly curtail abortion rights, despite having full control of Washington.

“President Trump answered calls from my Senate Republican colleagues and me by taking steps to block federal family planning funds from organizations that make abortion referrals or use the same facilities as abortion clinics, such as Planned Parenthood,” McConnell wrote in an op-ed Friday morning.

Abortion rights supporters say the rule stripping funds to Planned Parenthood and other abortion providers threatens contraceptive and other women’s health services for millions of low-income women. Most of Planned Parenthood’s government funding, which comes from Medicaid and other programs, will not be affected by this rule.

Republicans and closely allied conservative groups, even as they cheered the rule, noted that they hope to go much further.

Sen. Joni Ernst (R-Iowa) called the rule a “significant step forward” but said she will continue to push for her bill that would strip Planned Parenthood of all of its federal funding. Other GOP senators want to take another run at passing a bill to make the ban on taxpayer funding for abortion permanent and expand it to private insurance plans that receive federal subsidies.

Democratic lawmakers are also building up toward other reproductive rights battles this year. That includes protecting federally funded fetal tissue research, which the Trump administration is reviewing under pressure from anti-abortion advocates, and revisiting the Hyde Amendment’s restriction on government funding for abortion, which dates back to the 1970s.

“We need to have the conviction that low-income women should be able to access all the reproductive options,” said Rep. Barbara Lee (D-Calif.), a member of the Appropriations Committee and leader of the Pro-Choice Caucus.

The White House and GOP-controlled Senate are equally dedicated to preserving existing abortion restrictions and forcing votes on new ones. Even if the bills are doomed to fail, anti-abortion groups close to Republican leaders say they could help drive a wedge between moderate and progressive Democrats.

“We don’t have the votes to pass just about anything,” said Susan B. Anthony List President Marjorie Dannenfelser on a call with reporters last week. “But we think this issue has the power to start to peel people away, especially in battleground races where there were [Democratic] pickups last time in purple and red districts. They’re freshmen members, they’re the most vulnerable members.”

Republicans will lean into that strategy next week, trying to capitalize on recent efforts in New York and Virginia to loosen restrictions on abortions later in pregnancy. The Senate will hold a vote on a bill that would make it a felony for doctors to fail to immediately hospitalize an infant that survives an “attempted abortion.” House Republicans are gathering signatures for a discharge petition in a longshot bid to force a floor vote on the same bill.

Democrats who oppose the policy argue that any harm to an infant is already a felony and that the bill unnecessarily restricts doctors from making case-by-case decisions about what is best for infants and mothers.

Given split control of Washington, some Democratic lawmakers and abortion rights advocates say their best option for fighting back is rigorous oversight.

In a letter last week, top House and Senate Democrats alleged that HHS rushed through the Title X rule without conducting required analyses about its impact. The committee leaders are demanding HHS provide any communications the department had with outside groups about the rule.

“The administration is willing to use every vehicle they have, whether it’s rulemaking or administrative executive action or budget, to take away women’s rights,” Murray said. “So of course we have to fight with everything, too.”

Source: https://www.politico.com/story/2019/02/22/trump-planned-parenthood-abortion-title-x-1204937
Droolin’ Dog sniffed out this story and shared it with you.
The Article Was Written/Published By: aollstein@politico.com (Alice Miranda Ollstein)