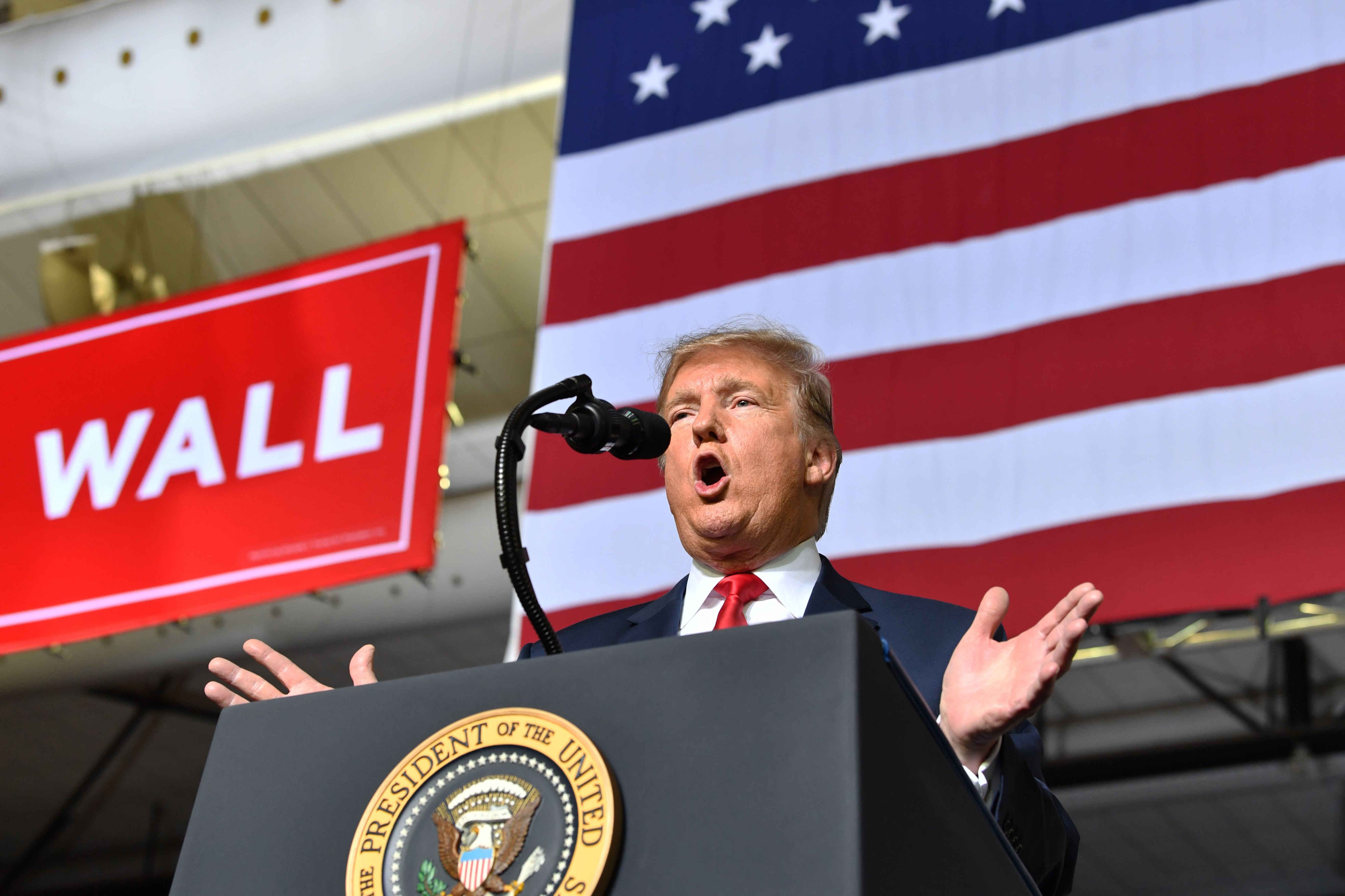 We’ll “see you in court.” So said California Governor Gavin Newsom hours after President Donald Trump signed a proclamation of emergency to redirect funds to a southern border wall without the consent of Congress. California, along with 15 other states, filed that suit on Monday. The advocacy group Public Citizen didn’t even wait until close-of-business on Friday to sue. The ACLU lags not far behind.

But what if the script and the endings for these lawsuits have already been written? What if following that script means these suits challenging the emergency as beyond the president’s fiscal powers will do nothing to enlarge Congress’ control over the federal purse? What if instead it has the main effect of giving Trump an electoral boost in 2020?

For there is another recent case that tracks, issue-for-issue and beat-for-beat, the filed and impending litigation challenges to the wall—and Trump won it.

That earlier case is the challenge to Trump’s travel ban. Like the wall, the travel ban fulfilled a 2016 campaign promise. Like the wall, the ban on entry by citizens from Muslim-majority nations was challenged within days. If the legal challenges to the wall anticipated in Trump’s Friday Rose Garden speech arrived quicker, it simply shows that all concerned have settled comfortably into a predictable dance of provocation and resistance. The travel ban litigation ended in a 5-4 decision in the U.S. Supreme Court, upholding the policy mere months before Americans returned to the polls in 2018.

The parallels between the travel ban and the wall cases are too precise and too plural to be ignored. Even if you think the court’s endorsement of the travel ban wrong—as I have argued—it would be a grave error to ignore its predictive quality.

To begin with, both the travel ban and emergency funding for the wall rest on Trump’s reliance upon a very broad delegation in a federal statute. In both cases, that is, an earlier Congress voluntarily handed over wide-ranging power for presidents to respond to novel circumstances. In both cases, the president has used this power to double down on hardening the border in light with his campaign rhetoric.

First, in both cases there also are powerful arguments that Congress did not anticipate the kind of policy Trump has pursued—a blunderbuss border control bearing down hardest on non-white migrants. The statutory delegations given by Congress in the two cases, to be sure, may have been broadly written. But neither the immigration provision at issue in the travel ban case nor the military construction provision in the wall case is a blank check: In both cases, there were conditions that the president likely failed to satisfy. When the president reallocates spending to the wall, for instance, he is supposed to show under the statute that the wall is “necessary” to support the armed forces. It is not easy to see how he shows this.

Second, in both cases the president’s own words about his reasons for declaring an emergency—his admission that the declaration was a strategic political decision and thus not necessarily brought on by a real emergency—and the data released by his own administration fatally undermine the factual justifications for emergency, unilateral action. In February 2017, the Department of Homeland Security—hardly the heartland of a bureaucratic “resistance”—concluded that citizenship in banned nations was “likely an unreliable indicator” of terrorism risk. Data from the same department today shows an 80 percent decline in Border Patrol apprehensions on the southern border since 2000. The number of families presenting at the border has also declined since last year.

So what will the Supreme Court do when confronted by (1) the president’s invocation of a broadly worded statute, (2) to enact a scattershot, arguably racialized form of border control, (3) where there are colorable arguments that president has not satisfied the statute’s triggers for extraordinary action, and (4) in any case, the executive’s own words and data show that the policy is unwarranted?

Here’s an answer using only a few choice quotes from the Supreme Court’s decision upholding the revised and slightly narrowed travel ban: It would start by observing that the statutory basis for the wall “exudes deference to the president in every clause.” It would build on this by asserting that “the admission and exclusion of foreign nationals” is a “fundamental sovereign attribute exercised by the Government’s political departments largely immune from judicial control.”

Then the kicker: If the policy’s challengers point to the president’s own statements on Friday, or his own past conduct in the context of budget negotiations to show that there is no border emergency, or that the real motive at work is to fulfill a campaign promise with 2020 in mind, the court would then remind them, again quoting the travel ban decision, that it is not “the statements of a particular president,” but rather “the authority of the presidency itself” that is at issue. In effect, the court here said that it would refuse to take Trump at his word, and instead ignore evidence of either flawed motive or insufficient justifications. English law had a Latin maxim that nicely captures the court’s thought here: “rex non potest peccare,” or the king can do no wrong.

Under this doctrine, the fact that the president’s aim of circumventing Congress’s control of appropriations is arguably unconstitutional matters no more than the president’s expressions of animus mattered in the travel ban case.

In this manner, the Supreme Court’s opinion from last year can be applied point for point to the statutory and constitutional arguments against the wall emergency proclamation. The expected result is that the president prevails. The Kavanaugh confirmation only makes this more likely given the new justice’s record of voting in favor of expansive presidential powers.

Don’t get me wrong: I am no fan of the wall. My point is not here that the Supreme Court’s travel ban decision is correct. Rather, it is probative of the justices’ likely action: A court that aggressively evades real opportunities to parry presidential lawlessness will once again look away. Racial and ethnic minorities, never winners in the Roberts Court, will again lose out.

The real winner from the litigation, I think, will not be Congress. Nor will it be “the presidency itself.” If Democrats hope to pursue their own immigration priorities through the same means when a Democrat takes the White House, they may well not have the same luck. The Roberts Court showed itself capable of intense skepticism of a Democratic president’s immigration initiative when it almost invalidated President Barack Obama’s “DAPA” program, which granted work permits and deportation stays to thousands of noncitizen parents. Lawyers can carve an explanation for its different treatment of Obama’s and Trump’s policies. Results, though, speak louder than casuistry. I have little doubt that the Roberts court, and future courts, will continue to find in the case reports enough material to uphold policies perceived as desirable, while invalidating policies perceived to be undesirable.

Rather, the winner from this litigation will be the “particular president” who sits in the Oval Office now: The Supreme Court, if it follows the script set by the Travel Ban case, may well let him pursue his immigration policies unhindered.

There’s another potential upside for him: The timing of the judicial review will likely ensure that the wall case, like the travel ban case, immediately precedes the 2020 election. (The present solicitor general has been very aggressive about fast-tracking cases to the Supreme Court. Just last Friday, he succeeded in getting the court to fast-track a challenge to the Trump administration’s addition of a citizenship question to the 2020 census.) The travel ban was supported by a “clear majority” of Americans. And though the wall lacks similar support, a decision validating it may well be a boon to candidate Trump in the crucial months before the 2020 poll. Of course, it may also have the opposite effect, energizing liberals and sending them to the polls in droves.

So with both sides digging in, the fighting seems more a matter of political theater than legal principle. Given the strong signals of which way the Supreme Court is likely to rule, moreover, it’s a play that should generate little or nothing by way of suspense. Just a dismaying sense that season two is pretty much the same tale told in season one.

Source: https://www.politico.com/magazine/story/2019/02/19/trump-national-emergency-border-wall-225164
Droolin’ Dog sniffed out this story and shared it with you.
The Article Was Written/Published By: Aziz Huq