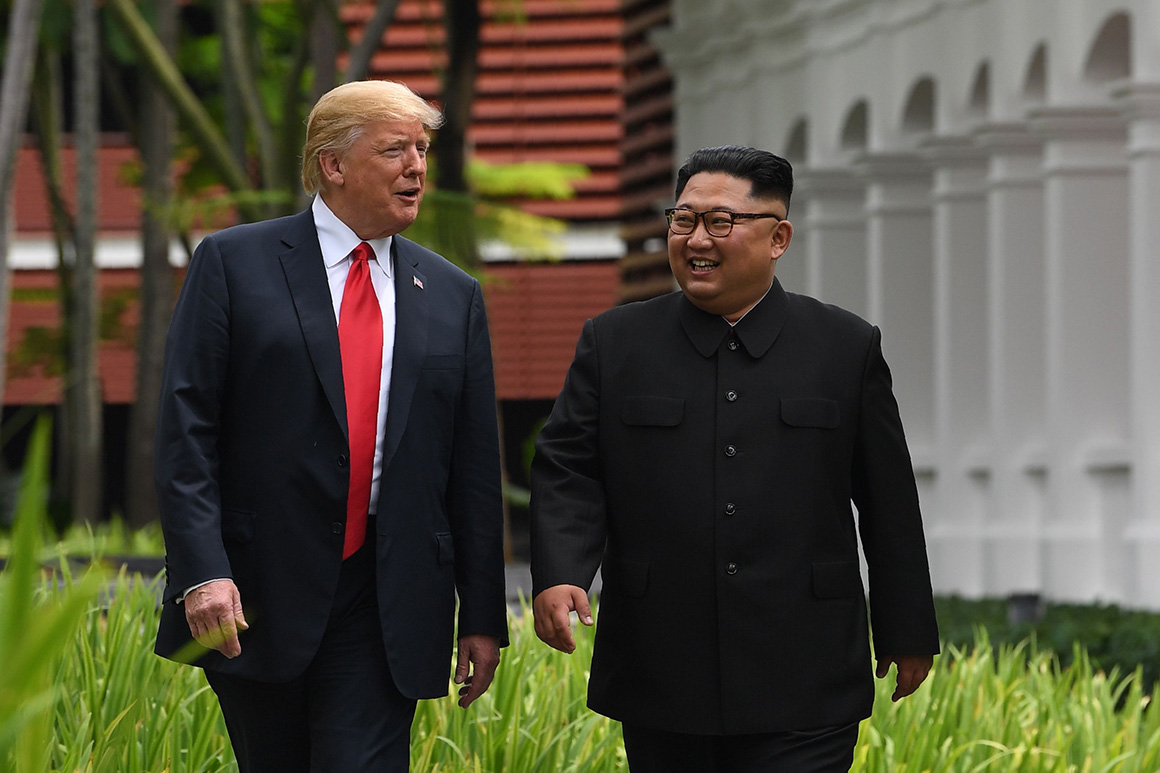 Stung by domestic defeat after a losing battle with Democrats in Washington, D.C., this winter, President Donald Trump hopes his negotiating skills can achieve better results some 8,000 miles away when he meets with North Korea’s leader in Vietnam later this month.

Trump will travel for his second session with the North Korean dictator Kim Jong Un to discuss whether the strongman might relinquish his nuclear weapons in return for an end to economic isolation.

Skeptics call it a fool’s errand. But even some harsh critics of Trump’s foreign policy hold open the possibility that the president mught find it easier to deal with the diminutive Asian tyrant than with House Speaker Nancy Pelosi.

At a minimum, the Hanoi summit offers Trump a chance to shift a losing political narrative which dates back to the drubbing his party took in November’s midterm elections.

“A lot of positive things are going on,” Trump insisted in a Friday White House news conference mostly devoted to his frustration that Congress had denied him on the border wall funding he’d long demanded. “We’re working on a summit,” he added, predicting that it “will be a very successful one.”

If so, the summit could be a step towards a historic diplomatic achievement that becomes central to his 2020 reelection pitch. But another high-profile failure could leave Trump looking dangerously ineffectual.

“If he has another summit with Kim Jong Un that doesn’t really lead to something more serious than what we’ve seen so far, having had the debacle of the negotiation with the Congress, it starts to chip away at his mantra that ‘I alone can fix it’ and ‘I’m the greatest deal-maker of all time,’” said Eric Edelman, a former top Pentagon official under President George W. Bush.

“Democrats are likely to say he pisses off our friends, cozies up to our enemies and can’t negotiate out of a paper bag, much less ‘The Art of the Deal,’” Edelman said. If Trump secures real concessions from Kim, he added, the president “can make a plausible case that his methods are unorthodox — but he’s gotten results.”

While Trump allies concede the partial government shutdown was a setback for the president, they dismiss talk of a winter of discontent, noting that Trump’s Gallup approval rating has bounced from 37 percent during the shutdown to 44 percent this week — just 2 points below his winning 2016 election total.

Insisting there is no serious damage to repair, they say they are measuring the Hanoi summit on its national security merits — as a test of whether North Korea, one of the world’s most dangerous regimes, can be persuaded to give up a nuclear program it developed at the cost of decades of deprivation and isolation.

One Republican close to the White House argued that any implications for the president’s standing are mainly on the upside. Most Americans don’t pay attention to the details of nuclear diplomacy and are more likely to focus on a stunning success than a continued stalemate.

“I think it’s simple: If it’s a success, they’ll tout it. If it’s not, they won’t,” said a Republican close to the White House. “It’s historic and incredible if it works. It’s a setback if it doesn’t.”

Skeptics have long scoffed at the possibility that Trump can persuade Kim to give up his nuclear arsenal, arguing that the North Korean leader is playing to Trump’s vanity — including by sending him fawning letters that Trump proudly shows off to Oval Office visitors — while slowly chipping away at his international pariah status.

Those critics note that Trump’s previous summit with Kim, in Singapore last June, was more a media spectacle than a sober diplomatic exchange and produced only a vague statement of shared goals. While Trump declared it an unqualified success, his administration scaled back expectations weeks before the meeting after the North Koreans rejected a written U.S. proposal laying out a road map for the “complete, verifiable, and irreversible” denuclearization that Trump officials have demanded.

But at least one leading authority on nuclear strategy concedes that Trump might, almost by accident, crack one of the hardest and most dangerous international problems in generations.

“This is not normal diplomacy. But this is not a normal president. Maybe in spite of himself, he has some pretty brilliant ideas,” said Graham Allison, a longtime nuclear strategist at Harvard University.

Trump “is more like what Kim is. Kim looks at social media, watches a basketball game, watches some stupid movie. He is communicating to this young man in ways he may understand better than a lecture from me,” Allison added.

Optimists point to recent evidence that Trump’s special representative to North Korea, Stephen Biegun has been gaining traction. After initially struggling to secure meetings with his North Korean counterparts following his August appointment, Beigun has had more success and has raised his profile in an empowering way. Diplomats and experts took note of a photo Trump tweeted from the Oval Office on Christmas Eve showing Biegun, along with National Security Council official Allison Hooker, standing beside the Resolute desk discussing North Korea.

“Christmas Eve briefing with my team working on North Korea — Progress being made,” Trump wrote. “Looking forward to my next summit with Chairman Kim!”

Joel Wit, a senior fellow at the Stimson Center who helped negotiate a 1994 U.S. nuclear agreement with North Korea, called the picture an “important signal” to the North Koreans “that Biegun can actually see the president of the United States — and that’s not a given.”

In an address at Stanford University last month, Biegun announced that the North Koreans have taken preliminary steps to dismantle two sites used for missile and nuclear testing and have committed to destroying their plutonium and uranium enrichment facilities.

“We’re seeing a gradual evolution of the positions on both sides, which is an encouraging sign,” Wit said. “Certainly there’s a recognition that the substantive outcomes have to be more than they were at the first summit. I feel like this is going to be better.”

Administration officials said they expect to leave Hanoi with a road map for North Korea’s denuclearization that outlines a series of steps each side can commit to undertaking in order to achieve that goal. Biegun hinted at this approach in his remarks, telling the audience at Stanford that the North Koreans were prepared to take action contingent upon “the United States taking corresponding measures.”

But in his news conference Friday, Trump seemed to have the highest hopes for his meeting with Kim.

Trump even declared that Japan’s prime minister, Shinzo Abe, had nominated him for the Nobel Prize in appreciation of his nuclear diplomacy.

Abe “gave me the most beautiful copy of a letter that he sent to the people who give out a thing called the Nobel Prize. He said, ‘I have nominated you respectfully on behalf of Japan.’ I said, ‘Thank you, many other people feel that way too,’” Trump said.

That claim puzzled analysts who note that Tokyo has concerns that the president’s apparent eagerness to cut a deal with Kim could leave unaddressed Japanese concerns about North Korea’s short-range missile program.

Even if Trump isn’t awarded — or even actually nominated — for a Nobel Prize, he is likely to cast himself as a peacemaker.

Source: https://www.politico.com/story/2019/02/17/trump-north-korea-summit-1173297
Droolin’ Dog sniffed out this story and shared it with you.
The Article Was Written/Published By: ejohnson@politico.com (Eliana Johnson) On the same day that they dropped their first greatest hits collection, the White Stripes shared a new animated video for “Let’s Shake Hands.” “Let’s Shake Hands” is the first song Meg and Jack White recorded in their living room and originally released as a 7-inch single in 1998. The clip for the new video is... [...]