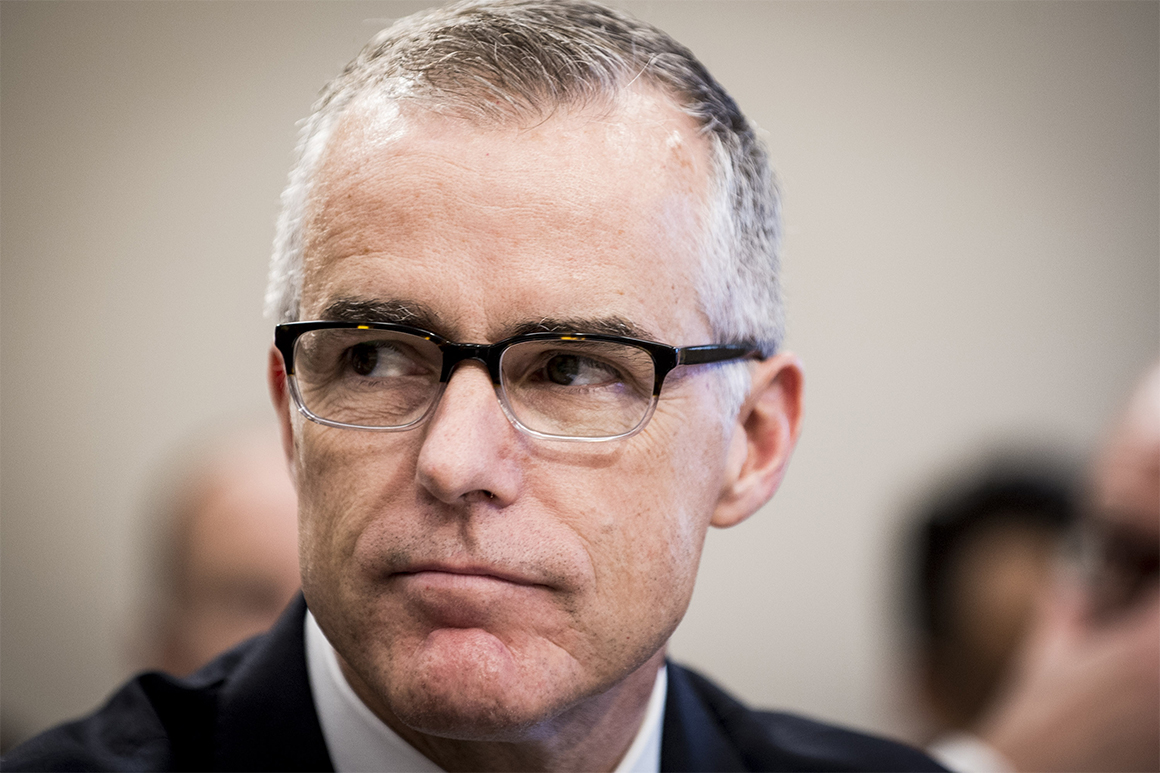 Former FBI Deputy Director Andrew McCabe said he was ousted from the bureau in March 2018 because he opened two investigations into President Donald Trump 10 months earlier.

“I believe I was fired because I opened a case against the president of the United States,” McCabe told host Scott Pelley during an interview on CBS News’ “60 Minutes” that aired Sunday.

Former Attorney General Jeff Sessions dismissed McCabe — a little more than a day before he was set to formally retire — at, Sessions said, the recommendation of the FBI’s Office of Professional Responsibility, which cited findings from a report by the Justice Department’s inspector general.

The department watchdog concluded that McCabe inappropriately authorized the disclosure of information to a Wall Street Journal reporter about an ongoing investigation into the Clinton Foundation, and lied about the leak to officials at DOJ.

Trump tweeted at the time that McCabe’s firing marked “a great day for the hard working men and women of the FBI — A great day for Democracy.”

Reflecting on that pronouncement during his “60 Minutes” appearance, McCabe said: “The idea that this president would know what a great day for the FBI or a great day for democracy was is preposterous.”

McCabe was elevated to the role of acting FBI director in May 2017 after Trump fired FBI Director James Comey, and said he promptly opened two investigations into the president. A criminal inquiry focused on whether Trump obstructed justice by firing Comey, and a separate counterintelligence probe sought to determine whether the president was acting on behalf of the Russian government.

To justify his firing of Comey, Trump cited a three-page memo by Deputy Attorney General Rod Rosenstein that detailed actions Comey took in relation to the FBI’s investigation of Hillary Clinton’s private email during her time as secretary of State.

But McCabe on Sunday claimed that Trump had urged Rosenstein to reference in his memo the bureau’s investigation of Russian interference in the 2016 election.

“Rod was concerned by his interactions with the president, who seemed to be very focused on firing the director and saying things like, ‘Make sure you put Russia in your memo.’ That concerned Rod in the same way that it concerned me and the FBI investigators on the Russia case,” McCabe said.

“He explained to the president that he did not need Russia in his memo. And the president responded, ‘I understand that, I am asking you to put Russia in the memo anyway.’”

In discussing concerns about Trump’s attitude toward Russia, McCabe recounted on “60 Minutes” a briefing he received from a bureau official who had attended a meeting with the president. McCabe said the official described Trump siding with Russian President Vladimir Putin over American intelligence officials on the subject of North Korea’s nuclear capabilities.

“Essentially, the president said he did not believe that the North Koreans had the capability to hit us here with ballistic missiles in the United States. And he did not believe that because President Putin had told him they did not. President Putin had told him that the North Koreans don’t actually have those missiles,” McCabe said.

“Intelligence officials in the briefing responded that that was not consistent with any of the intelligence our government possesses, to which the president replied, ‘I don’t care. I believe Putin.’”

In a statement to CBS News, the White House accused McCabe of opening “a completely baseless investigation into the president,” and said that he has “no credibility.”

Fifteen minutes before the airing of McCabe’s interview, the president tweeted that special counsel Robert Mueller’s investigation “is totally conflicted, illegal and rigged,” adding: “Should never have been allowed to begin, except for the Collusion and many crimes committed by the Democrats. Witch Hunt!”

A book by McCabe, “The Threat: How the FBI Protects America in the Age of Terror and Trump,” is to be released Tuesday.

Source: https://www.politico.com/story/2019/02/17/mccabe-fired-trump-fbi-1173596
Droolin’ Dog sniffed out this story and shared it with you.
The Article Was Written/Published By: qforgey@politico.com (Quint Forgey)