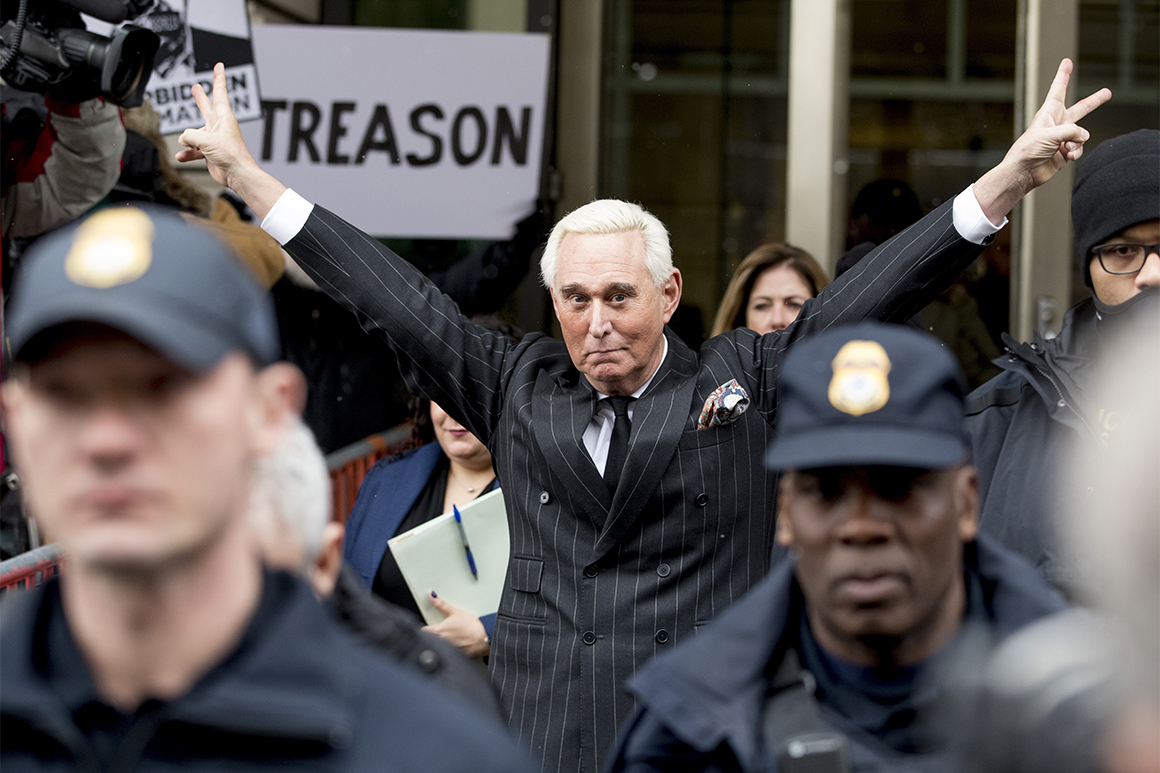 With a light hand, barely pressing his pencil on paper, special counsel Robert S. Mueller III began sketching his case for Trump campaign collusion with the Russians in a new Friday court filing related to Roger Stone’s prosecution for lying to Congress.

Until Friday, Mueller’s team had been coy about directly connecting any Trump campaign associate to a 12-member Russian GRU military intelligence team it indicted in July 2018 for hacking emails from the Democratic National Committee and the Clinton presidential campaign. It had secured guilty pleas from such scandal participants as former national security advisor Michael Flynn, Trump campaign executive Rick Gates, campaign backbencher George Papadopoulos, and others, and convicted campaign director Paul Manafort on an array of financial fraud charges connected to his politicking and lobbying for pro-Russian politicians in Ukraine.

But the two seemingly parallel investigations never really intersected. Self-described dirty trickster Stone, who worked on the early Trump campaign and remained close to Trump and his aides after departing, wanted the court to say the investigations were separate. He requested a new judge, saying the charges against him had nothing to do with the Russian hackers case, also being prosecuted before Judge Amy Berman Jackson. But the judge tossed Stone’s request, accepting Mueller’s line of argument that Stone directly interacted with the Russians and Julian Assange’s WikiLeaks, the middleman for the hacked emails.

Now that the two investigations are one, what remains to be gleaned is how wide and deep the Trump campaign’s connections to the Russians and WikiLeaks were.

Previous Mueller filings had noted Stone’s attempts to contact WikiLeaks leader Julian Assange through intermediaries, hoping to learn what sort of politically potent documents he might have. But Stone had steadfastly denied any contact with Russia or WikiLeaks. That’s a lie, Mueller’s new filing says. Citing evidence obtained in “dozens of search warrants on various accounts used to facilitate the transfer of stolen documents for release,” it claims Stone communicated with WikiLeaks (referred to as “Organization 1” in the filing) and Guccifer 2.0 (a Russian intelligence alias used to spread the hacks).

Who else did Stone talk to about the WikiLeaks dump? Last month’s Stone indictment had him informing “senior Trump campaign officials” between June and July 2016 that WikiLeaks possessed hacked emails that could damage the Clinton candidacy. Then came WikiLeaks’ first release of Democratic emails on July 22, 2016, followed by the Trump campaign’s request for more.

This artfully constructed sentence in the Stone indictment has birthed a million speculations that Donald Trump was among the requesters: “A senior Trump campaign official was directed to contact Stone about any additional releases and what other damaging information Organization 1,” the indictment reads. Would anybody be in a position to direct a senior Trump campaign official but Trump himself? Lightly traced but still visible, Mueller has drawn a possible line from Trump to a campaign aide to Stone to WikiLeaks and the Russians. Inside the White House, Trump must be screaming for an eraser.

In the Manafort case, Mueller roughed up the convict with explicit language in a sentencing memorandum filed Friday. “Manafort acted for more than a decade as if he were above the law, and deprived the federal government and various financial institutions of millions of dollars,” Mueller stated. “Given the breadth of Manafort’s criminal activity, the government has not located a comparable case with the unique array of crimes and aggravating factors.” Under federal sentencing guidelines, Manafort could get 19 to 24.5 years in prison—essentially a life sentence for the 69-year-old.

Mueller looked like a merciful, New Testament-toting Christian in comparison to Judge Jackson in the Manafort matter. Her Feb. 13 hearing, in which she examined the special counsel’s charge that Manafort had lied after promising cooperation, was released in redacted form on Friday. The judge rejected Manafort’s attorneys’ assertion that confusion and not lies were behind the stream of bogus information Manafort had fed Mueller. “My concern isn’t with non-answers or simply denials, but the times he affirmatively advanced a detailed alternative story that was inconsistent with the facts.” The lies followed a pattern, too, the judge said. “Concessions comes [sic] in dribs and drabs, only after it’s clear that the office of the special counsel already knew the answer. Again, it’s part of a pattern of requiring the office of the special counsel to pull teeth; withholding facts if he can get away with it.”

The judge singled out the way Manafort had lied about his interactions with Konstantin V. Kilimnik, Manafort’s former employee and believed by Mueller to be a Russian intelligence asset, calling it a “problematic attempt to shield his Russian conspirator from liability and it gives rise to legitimate questions about where his loyalties lie.”

Manafort originally claimed to have spoken only once with Kilimnik about the Ukrainian “peace plan”—at the Grand Havana Room cigar joint in New York on Aug. 2, 2016, just before he was fired from the Trump campaign. But Manafort eventually conceded that he discussed the “peace plan” three additional times after prosecutors showed him evidence of the other meetings. Why these lies? What was he hiding?

The Kilimnik question engaged and enraged Judge Jackson. “We’ve now spent considerable time talking about multiple clusters of false or misleading or incomplete or needed-to-be-prodded-by-counsel statements, all of which center around the defendant’s relationship or communications with Mr. Kilimnik,” she said. “This topic is at the undisputed core of the office of special counsel’s investigation.”

With Democrats now calling the investigative shots in the House of Representatives, House Oversight Committee Chairman Elijah Cummings made news on Friday with a letter to White House Counsel Pat Cipollone claiming evidence that two Trump attorneys had lied to government ethics officials about Michael Cohen’s hush-money payments to women alleging affairs with Trump before the 2016 election.

“This raises significant questions about why some of the president’s closest advisers made these false claims and the extent to which they too were acting at the direction of, or in coordination with, the president,” Cummings wrote. Trump’s attorneys had denied that Trump owed money to Cohen in 2016 and 2017, but the story evolved after Trump attorney Rudy Giuliani said in a TV interview that Trump had paid Cohen as part of a “retainer.”

After we sort out the whole Russian mess, the task will be assigned to someone to tally up the saga’s greatest lies. One contender for the crown might be White House press secretary Sarah Sanders, who told CNN on Friday that she was interviewed by Mueller’s team late last year. Because Sanders has been loquacious on the investigation topic since taking the press secretary job in July 2017, Mueller would want to know what sort of input Trump provided. Did he feed her the sort of lies that could be read as obstruction to justice?

I hope for Sanders’ sake she told the truth. Judge Jackson and Mueller don’t cotton to liars.

Is Judge Jackson a hanging judge? Send predictions via email to Shafer.Politico@gmail.com. My email alerts urge forgiveness for all the sinners. My Twitter feed is on the same page. My RSS feed suggests shallow, unmarked graves in the Sonoran Desert for the transgressors.

Source: https://www.politico.com/magazine/story/2019/02/16/robert-mueller-roger-stone-paul-manafort-225162
Droolin’ Dog sniffed out this story and shared it with you.
The Article Was Written/Published By: jshafer@politico.com (Jack Shafer)