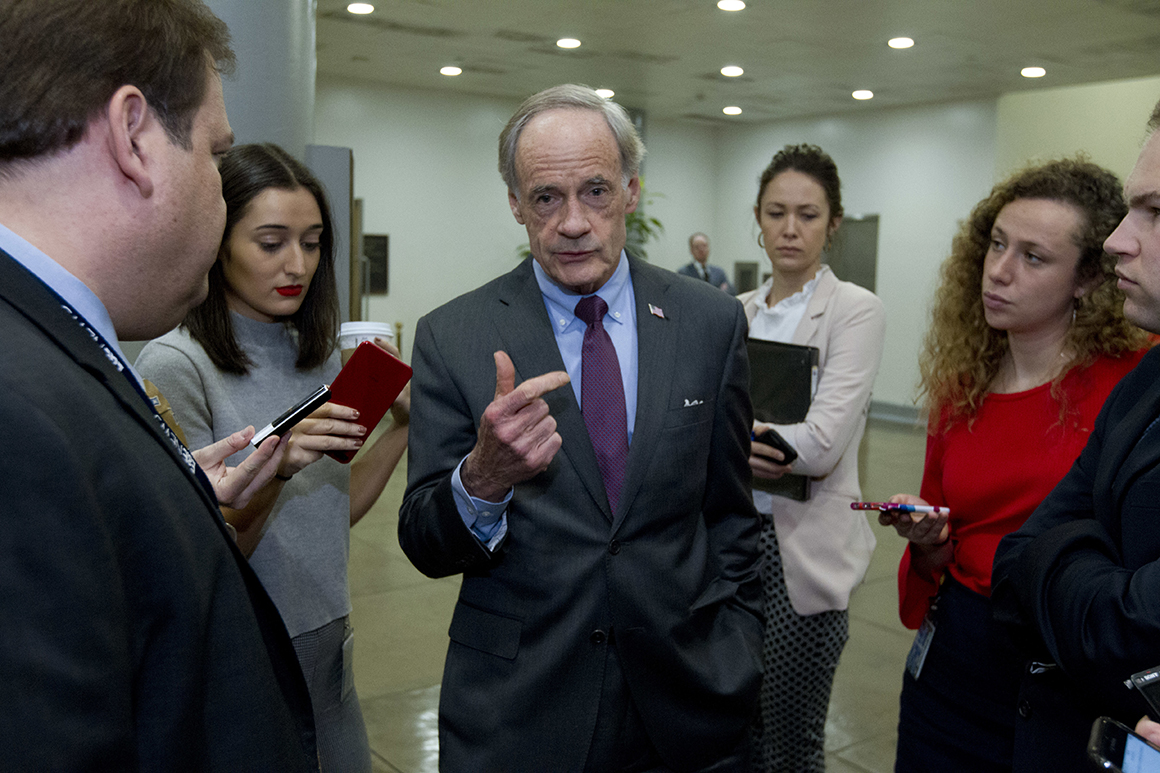 The Environmental Protection Agency released a plan on Thursday to deal with a class of toxic chemicals found in 98 percent of Americans’ blood, but offered no guarantee the agency will enact enforceable drinking water regulations for the two best-studied compounds.

Instead, the plan commits to taking the first step under the lengthy Safe Drinking Water Act process by making a formal decision on whether to set a limit on the amount of the chemicals allowed in tap water, called a Maximum Contaminant Level, this year. That deadline was added after POLITICO reported last month that a draft of the plan did not include a drinking water limit, according to multiple sources with knowledge of the changes.

“We’re going through the regulatory process. We can’t predetermine what the outcome will be because we take notice and comment. But I have every intention of setting an MCL,” acting Administrator Andrew Wheeler said at a press conference in Philadelphia.

“I can’t give you a definite answer as to how long it will take,” Wheeler added, noting that EPA has not set a new maximum contaminant limit since the law was amended in 1996. The agency is “charting new territory,” he said.

Drinking water experts say it would take at least two more years until any mandatory federal limit would be likely to go into effect for the chemicals, called PFOA and PFOS, if the agency does decide to set one. That would be roughly a decade after an expert science panel linked PFOA with kidney and testicular cancer, immune problems and other ailments — findings that led manufacturer DuPont to agree to a $670 million settlement with affected residents in West Virginia. Court documents show chemicals manufacturers have known of their harms for decades.

The chemicals, part of a broader class called PFAS, were used for decades in products ranging from carpeting to Teflon cookware to firefighting foam. The very quality that made them so useful at resisting water and stains – a strong molecular bond – causes them to persist for decades in the environment and in human bodies. EPA-mandated drinking water monitoring found PFOA and PFOS in at least 16 million Americans’ tap water, but new contaminations continue to come to light near industrial sites and military bases where the firefighting foam was used.

The promise in the new plan goes only slightly further than former Administrator Scott Pruitt vowed nine months ago at a two-day “national leadership summit” on PFAS. “The determination of a [drinking water limit] is something that we will begin in earnest post this meeting,” he said at the time.

Critics were quick to blast the lack of decisive action in Thursday’s plan.

“The PFAS Action Plan being trumpeted by EPA today is insufficiently protective, and it explains why Acting Administrator Andrew Wheeler would not commit to setting a drinking water standard for PFAS during his nomination hearing last month,” Sen. Tom Carper(Del.), the top Democrat on the Senate Environment and Public Works Committee, said in a statement.

Republican lawmakers have also expressed concern about the contamination in water supplies, and Senate Environment and Public Works Committee Chairman John Barrasso (R-Wyo.) said he planned to hold a hearing on the issue this spring.

“EPA must speak clearly about the risk that this class of chemicals poses to public health and the environment. The agency must be willing to take decisive action where it is warranted,” he said in a statement.
Democratic Reps. Frank Pallone (N.J.) and Paul Tonko (N.Y.), chairmen of the House Energy and Commerce Committee and its environment subcommittee, respectively, said in a statement the plan “fails to meet the challenge our nation faces with this growing water contamination and health crisis,” and warned that if EPA “intends to drag its feet, Congress will have to step in and lead the fight to protect Americans from these dangerous chemicals.”

For its part, industry welcomed the plan. 3M, the company that originally developed the class of chemicals and is facing dozens of lawsuits across the country related to contamination, said it supports EPA’s approach.

“3M agrees with EPA moving forward with the Safe Drinking Water Act’s maximum contaminant level process with respect to PFOA and PFOS. We support regulation rooted in the best-available science and believe that this plan may help prevent a patchwork of state standards that could increase confusion and uncertainty for communities,” the company said in a statement.

Advocates in communities with contamination from the chemicals have been nearly unanimous in their call for a broad and strict drinking water standard.

“We want to see the EPA establish a [drinking water limit] of 1 part per trillion for all PFAS,” Andrea Amico, who leads an advocacy group focused on the former Pease Air Force Base in New Hampshire, told EPA representatives at a later community engagement session it held in June in Exeter, N.H. “We need a very strict regulatory guideline and we need it now,” she said.

Part of the problem has been the data that EPA has on the prevalence of the contamination. When the agency mandated that monitoring, it set a detection level that scientists now say is too low, and covered only six types of PFAS.

EPA water chief Dave Ross told reporters Thursday morning that the agency will conduct additional monitoring for PFAS in its next round of mandatory testing under the Safe Drinking Water Act. According to the plan, EPA plans to propose a new round of tap water testing that searches for the chemicals at lower levels in 2020. It would then take at least two more years to conduct the monitoring and collect results.

But public health advocates say that’s no excuse for waiting to act on the chemicals for which there is already a large amount of scientific information and that are increasingly being found in water supplies from Michigan to New Mexico to New York.

“We’re talking about PFOA and PFOS — these are the two best-studied PFAS chemicals, and should be the ones that are easiest to protect against in our drinking water. So EPA’s inaction on this is just really astounding,” said Bart Johnsen-Harris with Environment America.

The plan also notes that EPA is moving to list PFOA and PFOS as hazardous under its Superfund program — a move that could help the agency compel cleanups. But draft EPA guidance for how stringently contaminated sites must be cleaned up has been stalled at the White House since August amid a dispute between EPA, DOD and HHS over how strict the requirements should be. EPA is not releasing that guidance today. Ross said it would be released “soon.”

Community groups also criticized EPA for not taking strong action to limit new types of PFAS from entering the marketplace. In the plan, EPA says it will use authorities recently granted by Congress to address “unreasonable risks” before new chemicals hit the market, and will issue regulations requiring companies to notify the agency before they manufacture PFAS that have already been approved by EPA for new uses – an effort that has been in the works since 2016. The agency offered no timeline for its issuance.

Geoff Gisler, an attorney for the Southern Environmental Law Center who represents Cape Fear River Watch in litigation relating to direct discharges of PFAS into the river by a Chemours plant, called the plan an “empty gesture for American families and communities.”

“While it’s essential that polluters are forced to clean up their existing pollution, EPA must also act to prevent industry from discharging these toxins and endangering people in the first place. The agency’s plan does nothing to stop ongoing pollution, a role that this administration has abandoned,” Gisler said in a statement.

The plan also lays out the next suite of PFAS chemicals that EPA will study for toxicity. Those include PFBA, PFHxA, PFHxS, PFNA, and PFDA. It also indicates that EPA will “explore” the possibility of requiring chemical manufacturers, paper mills and other industrial sources to report releases of the chemicals under the Toxics Release Inventory, a move that could help downstream water utilities and nearby residents of potential dangers.

Alex Guillén and Anthony Adragna contributed to this report.

Source: https://www.politico.com/story/2019/02/14/epa-chemical-plan-1174120
Droolin’ Dog sniffed out this story and shared it with you.
The Article Was Written/Published By: asnider@politico.com (Annie Snider)