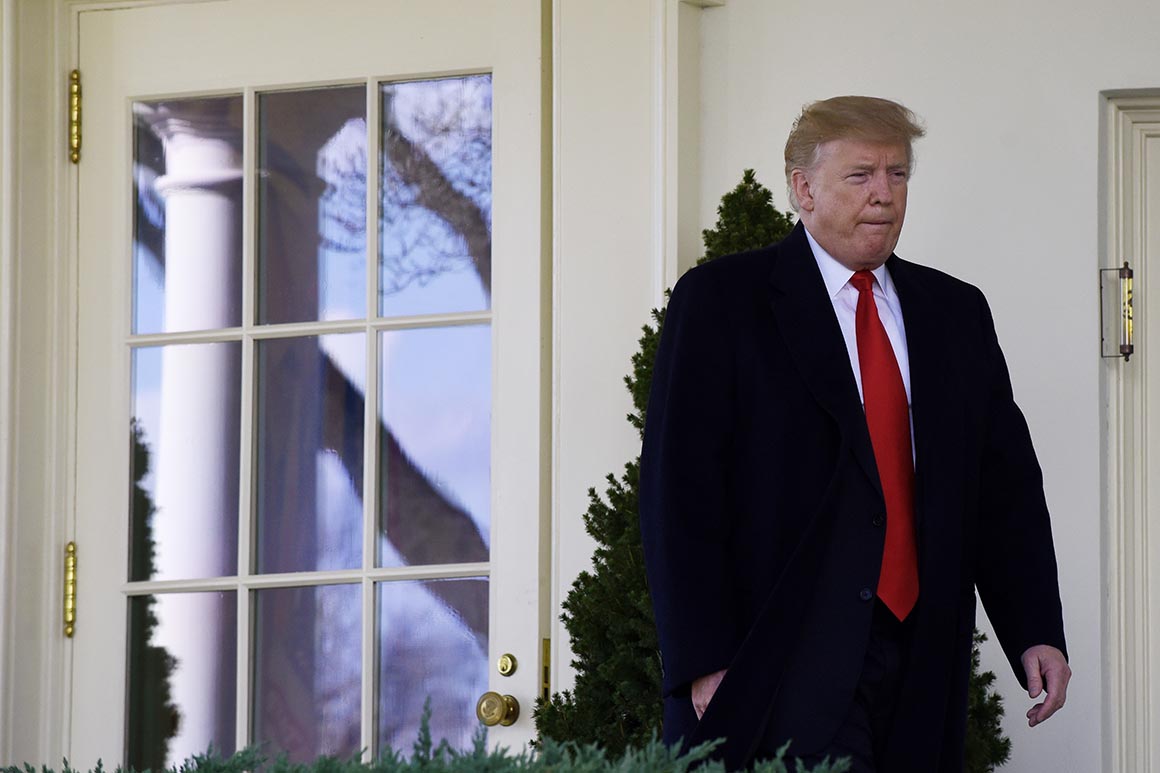 President Donald Trump’s decision to declare a national emergency in order to access funds Congress refused to appropriate for his border wall is set to unleash a furious legal war that could bog down the project for months or years.

Immigrant rights advocates, property rights activists, environmentalists, Democratic lawmakers and state officials are all loudly signaling plans for a hail of legal writs aimed at blocking the president from what they have denounced as an unconstitutional end-run around the usual budget process.

While judges have sometimes moved to block spending seen as unauthorized by Congress, historically it has been almost unthinkable for judges to interfere with or second-guess a president’s declaration of a military or national security emergency.

However, legal experts said Trump’s history of erratic and inflammatory statements, his frequent rhetorical disconnects with senior officials in his administration and his tendency to see crises that others view as completely contrived mean that challengers stand a strong chance of finding a judge willing to throw a monkey wrench into the president’s plans.

“Normally, any other time, you’d say it’s a no-brainer that the president wins,” at least with respect to the decision to declare an emergency, said Bobby Chesney, a University of Texas law professor. “But with this particular president, no bets are safe in assuming the courts will completely defer to him … Presidents traditionally get tremendous deference, but Trump is not going to get the same level of deference.”

Chesney noted that when U.S. intelligence chiefs testified in the Senate late last month about global threats to the country, there was only brief discussion of migration and no mention of a crisis related to the so-called caravans at the southern border.

“That really strips away the core rationale …. and creates much more chance than normal that even at that initial step there’s a non-negligible chance that [Trump’s plan] could be rejected,” Chesney said.

Some have compared the fusillade of litigation the administration is about to face to the one that developed against Trump’s travel-ban policy in 2017. The administration ultimately won on that issue in a 5-4 ruling at the Supreme Court, but only after the policy was significantly watered down and repeatedly blocked for months in what sometimes seemed like a legal war of attrition.

However, one contrast with the travel ban fight is the slow-motion nature of Trump’s emergency declaration on the border. The weeks of public threats have clearly given opponents of the border wall time to sharpen their legal arguments and their public rhetoric, while also giving the Justice Department more time to prepare for the inevitable onslaught of litigation.

California Attorney General Xavier Becerra, who has filed dozens of suits against Trump administration policy moves, added: “There is no national emergency. If Trump oversteps his authority and abandons negotiations with Congress by declaring a fabricated national emergency, we won’t only call his bluff, we will do what we must to hold him accountable. No one is above the law.”

Many of the critics painted Trump’s planned action as both grave and not entirely unexpected.

“This is about more than a political tactic. It’s an attack on our democracy by an autocrat,” said Frank Sharry of the immigrant-advocacy group America’s Voice. “Another moment of truth is upon us. This is not normal. Let us hope that Congress and the courts rally to defend what truly makes America great — a system of checks and balances that distributes power to prevent despotism.”

According to a source close to the White House, Trump is expected declare a national security emergency under the National Emergencies Act of 1976. Then administration officials will move to tap into various accounts that can be freed up by such a declaration, the source said.

Officials have also indicated that Trump may seek to use other authority to scrounge up funds for the project, including accounts that can be used without an emergency declaration and the more general “reprogramming” authority that administrations typically have to move modest amounts of money around to deal with various contingencies.

Some lawyers are already arguing that the inevitable border-wall litigation is an effort to impose a double standard on Trump, given that nearly 60 emergencies have been declared since President Gerald Ford signed the law in question four decades ago. The oldest one still on the books stems from Iran’s seizure of hostages at the U.S. Embassy in Tehran in 1979.

“From an originalist Constitution point of view, Congress probably shouldn’t have ever delegated this kind of power to the president in the first place, so they may have having second thoughts about having done that,” said John Eastman, a Chapman University law professor and former Justice Department official. “But the notion that this president shouldn’t be able to use powers that every other president has used, I think that’s just not a good use of the rule of law.”

Once an emergency is declared, there are various other laws that allow the president to divert funds for any construction that “requires the use of the armed forces” or “may require” using the military. Other provisions make money available for construction related to drug interdiction.

Josh Blackman, an associate law professor at the South Texas College of Law Houston, said the threshold for declaring an emergency was “broad” and “undefined,” putting Trump in a strong position legally.

“Congress basically said you can do it whenever you want whenever you think that national defense is at risk,” Blackman said. “And that’s a very broad and deferential standard.”

Still, most emergencies declared by most presidents have been used to authorize economic sanctions and and the freezing of assets in U.S. banks, rather than to spend funds from the U.S. Treasury for projects that Congress rejected. It’s unclear whether judges will see that use as subject to more robust legal review than blacklisting foreigners.

Trump’s plan is expected to come under legal attack from various quarters, including state and local governments, environmentalists, property owners along the border, would-be recipients of funds that would be diverted by Trump’s move and, potentially, by the House of Representatives.

Legal experts said affected property owners would have the clearest legal standing, but just what property is in most jeopardy of seizure by eminent domain may be unclear at the outset if the administration is vague about its construction plans.

On the other hand, the House may be well positioned to file suit almost immediately on a theory that it is being unconstitutionally bypassed. Lawyers say the House’s legal authority to sue on that basis is shakier than that of a private landowner who has his or her land seized. However, in 2015 a federal judge ruled than the then-GOP-led House had legal standing to sue over purportedly unauthorized cost-sharing payments to insurance companies under Obamacare.

After Trump was elected, he decided to stop making the payments. Because the litigation was settled, the Obama administration’s appeal was never resolved, so no binding precedent was set on whether the House can sue over claims of misspent funds.

A House-led challenge to the Trump declaration would be consistent with signals from the new Democratic House leadership that it plans to be active in the courts to resist Trump administration policy actions and litigation filed by conservative states seeking to affect federal policies.

Just Thursday, a judge from the New Orleans-based 5th Circuit granted the House’s motion to intervene in a pending appeal of another lawsuit challenging the federal government’s authority to pay other insurance subsidies under Obamacare.

Still, a ruling against Trump in the expected border wall litigation is by no means a guarantee, even in cases that wind up in front of a Democratic-appointed judge. About year ago, an Obama-appointed federal judge whom Trump repeatedly slurred during the 2016 campaign, Gonzalo Curiel, upheld the Trump administration’s authority to press forward with border wall prototype and replacement projects near San Diego.

Trump hailed that decision on Twitter as a “big legal win,” but did not mention that it came from the same American-born judge whom he proclaimed irredeemably biased during the campaign because of his Mexican heritage.

Curiel’s decision, which focused on environmental laws and regulations, said executive branch officials had broad authority from Congress to waive those rules for border construction. He did not address the use of military-related powers to spend funds not originally allocated for such construction.

However, the judge’s ruling did offer something helpful for California or any other state that may choose to take on Trump’s wall-related emergency declaration. While Curiel dismissed the suits before him, he ruled that the state of California did have standing to challenge the federal border construction work.

Analysts also noted that even setbacks for Trump in the legal battle may amount to political victories for him, as he paints himself as fighting hard against a variety of legal and political forces trying to frustrate him at every turn.

“He’ll be able to campaign against the backdrop of what the courts are doing to stop him,” predicted Chesney, the University of Texas law professor.

Ted Hesson and Anita Kumar contributed to this report.

Source: https://www.politico.com/story/2019/02/14/trump-national-emergency-legal-challenges-1170936
Droolin’ Dog sniffed out this story and shared it with you.
The Article Was Written/Published By: jgerstein@politico.com (Josh Gerstein)