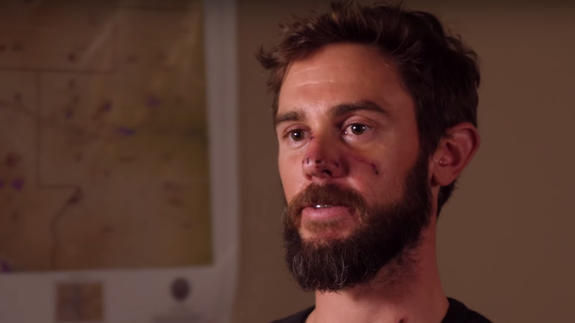 Warning: this video contains graphic images that some readers may find disturbing.

Well, kind of. Travis Kauffman, 31, was attacked by a mountain lion in the Horsetooth Mountain Open Space in Colorado on Feb. 4. Kauffman recounted his story to Colorado Parks and Wildlife just several days after, and the video was released on Thursday.

His plan was to run 12 to 15 miles that day, including a first-time run on the intense Towers trail, a path he’d only mountain biked before.

After hearing rustling in the brush behind him, he turned just in time to see a mountain lion just 10 feet away from him, and coming closer. He immediately threw up his arms and did his best “barbarian yell” in an attempt to ward off the predator. Still, it pounced.  Read more…

Source: https://mashable.com/video/travis-kauffman-recounts-mountain-lion-attack/
Droolin’ Dog sniffed out this story and shared it with you.
The Article Was Written/Published By: Harry Hill