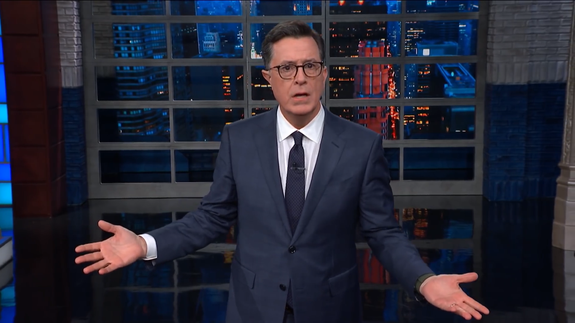 Donald Trump is set to declare a national emergency in order to unlock $8 billion in additional funds for his border wall, on top of the lowered $1.375 billion allocated in a bipartisan budget bill the president is also expected to sign.

“He claims he could get all the funding he wants for his wall if he just declared a national emergency. That, of course, would be insane,” Colbert said.

“It would be usurping Congress’s power, there would be immediate court challenges. Many in his own party have said it would set a terrible precedent of unconstitutional overreach by the executive branch. So I seriously doubt…I’m sorry, Mitch McConnell?” Read more… Source: https://mashable.com/video/stephen-colbert-trump-national-emergency/
Droolin’ Dog sniffed out this story and shared it with you.
The Article Was Written/Published By: Shannon Connellan