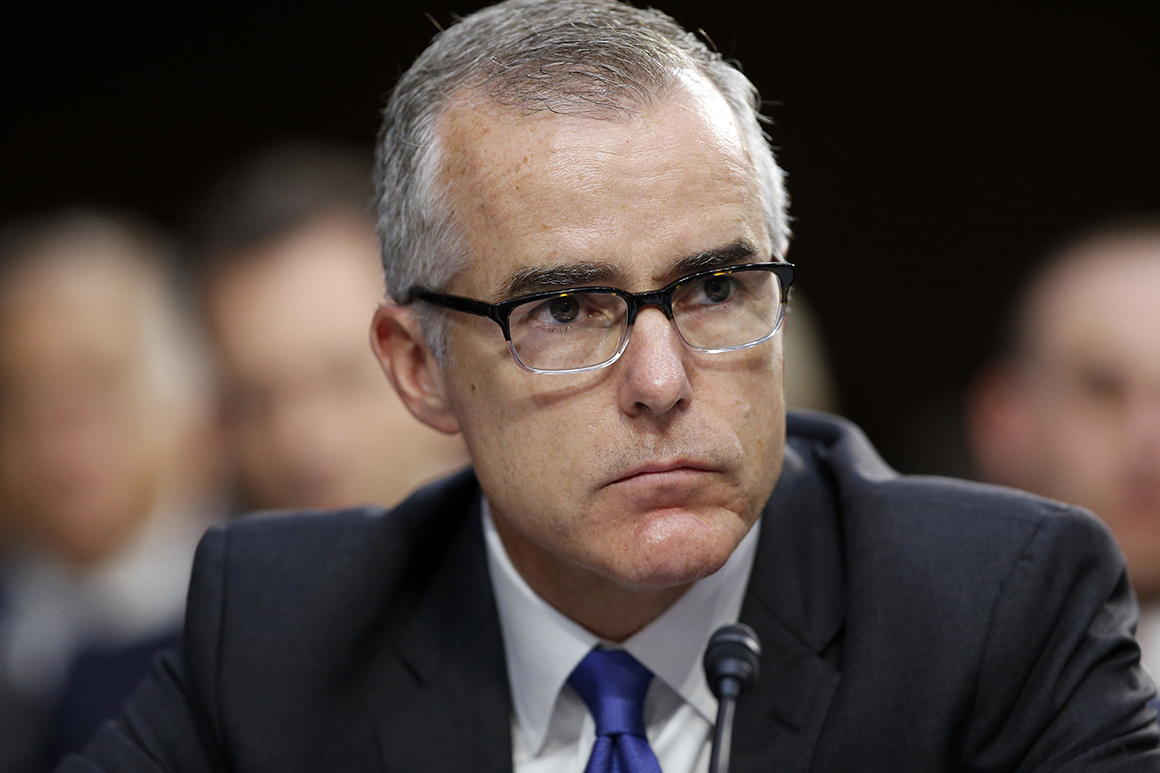 Former Deputy FBI Director Andrew McCabe on Thursday confirmed the existence of investigations into whether or not President Donald Trump was acting either knowingly or unwittingly as an agent of Russia, saying in an interview that he was “very concerned” and wanted to make sure the Russia investigation was on solid footing in case he was sacked.

In an interview set to air Sunday on CBS’s “60 Minutes,” McCabe told host Scott Pelley that he took the extraordinary step of opening the investigation in May 2017, almost immediately after he took over as acting director of the FBI in the wake of the president’s move to fire former bureau Director James Comey. He said he wanted to ensure there was documentary evidence that the probe was underway in the event that he too was removed.

McCabe’s revelation confirms a report by The New York Times last year that in the time between Comey’s firing and the appointment of special counsel Robert Mueller to oversee the investigation into Russian election interference, the agency examined whether the president was doing Russia’s bidding in both a counterintelligence and criminal investigation for potential obstruction of justice.

In a clip of the “60 Minutes” interview aired Thursday on “CBS This Morning,” McCabe told Pelley that he met with the president at the White House the same day Comey was fired.

As a result, he said, “I think the next day, I met with the team investigating the Russia cases, and I asked the team to go back and conduct an assessment to determine where are we with these efforts and what steps do we need to take going forward.”

McCabe recalled that he wanted to make sure the Russia probe, which includes whether Trump or his campaign colluded with Russian meddling efforts, was on “solid ground” because he feared the White House would try to shut it down.

“I was very concerned that I was able to put the Russia case on absolutely solid ground in an indelible fashion that were I removed quickly or reassigned or fired, that the case could not be closed or vanish in the night without a trace,” he told Pelley. “I wanted to make sure that our case was on solid ground and if somebody came in behind me and closed it and tried to walk away from it, they were not be able to do that without creating a record why they’d made that decision.”

The former deputy FBI director was fired by then-Attorney General Jeff Sessions last year just a day before he was set to retire, but he had become a favorite punching bag of the president’s long before.

McCabe helped oversee the FBI’s investigation into former Secretary of State Hillary Clinton’s private email server, a probe that has long been the subject of complaints by the president. Trump famously railed against Clinton for that investigation — which never resulted in any charges against Clinton — and cited the FBI’s handling of that case in a letter to justify Comey’s firing, though he later admitted it was because of the Russia investigation.

Last year, the Justice Department’s internal watchdog found McCabe inappropriately authorized the disclosure of sensitive information about the Clinton investigation to a reporter and repeatedly lied about it to investigators and even to Comey, which Sessions had argued was the basis for his firing.

McCabe’s dismissal meant that he was unable to collect full benefits from the FBI. The former deputy director is threatening a lawsuit in order to collect them, though McCabe’s lawyers have acknowledged that the watchdog’s findings were referred to prosecutors. He’s set to release a tell-all book next week detailing his time working under Trump.

In an excerpt of McCabe’s book published Thursday by The Atlantic, the former deputy FBI director goes into more detail about the aftermath of Comey’s firing and Deputy Attorney General Rod Rosenstein’s decision to appoint a special counsel to oversee the Russia probe.

The president, McCabe wrote, was proud of his decision to fire Comey and misjudged how FBI agents at the bureau’s Pennsylvania Avenue headquarters were reacting to Comey’s firing. The president wanted to go to the FBI’s headquarters to express his support for the bureau, McCabe wrote in his book, an idea that the then-acting FBI director said he didn’t feel was appropriate and hoped would not come to fruition.

Rosenstein, McCabe wrote, was “obviously upset” about Comey’s firing and that the White House was making it seem like the scheme was Rosenstein’s suggestion.

McCabe also said that he urged Rosenstein to consider appointing a special counsel, citing the uproar over how the Clinton email investigation had ended. The deputy director wrote that at that point Rosenstein was “very engaged” but “not yet convinced.”

Elsewhere in the excerpt, McCabe described meeting with the so-called congressional Gang of Eight — the House and Senate majority and minority leaders and the chairmen and ranking members of the House and Senate intelligence committees — the next week, when Rosenstein informed them of his decision to appoint a special counsel. McCabe had argued to Rosenstein that “informing Congress of the bureau’s actions” would equate to “drawing an indelible line around the cases we had opened,” he said.

McCabe said that point felt like a moment of relief for him: “When I came out of the Capitol, it felt like crossing a finish line. If I got nothing else done as acting director, I had done the one thing I needed to do.”

Source: https://www.politico.com/story/2019/02/14/fbi-investigation-trump-russia-1169846
Droolin’ Dog sniffed out this story and shared it with you.
The Article Was Written/Published By: coprysko@politico.com (Caitlin Oprysko)