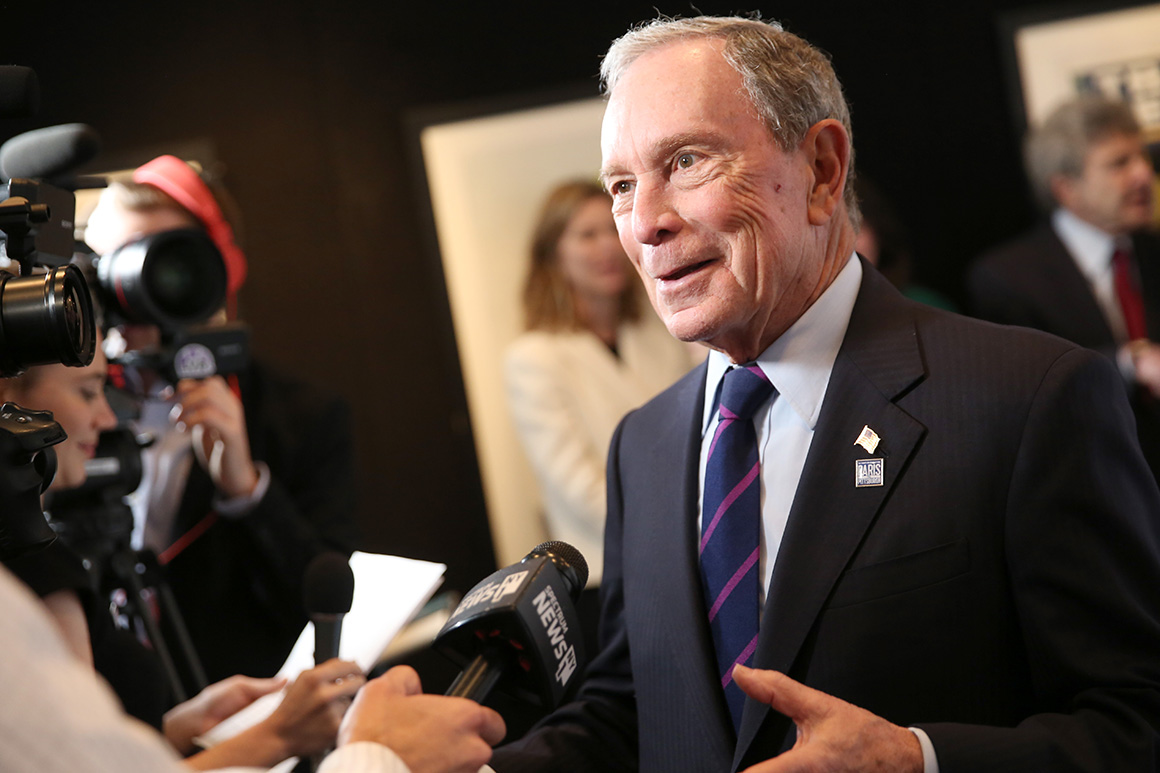 Billionaire philanthropist Michael Bloomberg is preparing to spend at least $500 million from his own pocket to deny President Trump a second term, according to Democratic operatives briefed on his plans.

Bloomberg has not yet announced whether he will run in the Democratic primary. If he runs, he will use that half-billion-dollar stake — roughly $175 million more than the Trump campaign spent over the course of the entire 2016 election cycle — to fuel his campaign through the 2020 primary season, with the expectation that the sum represents a floor, not a ceiling, on his potential spending.

If Bloomberg declines to seek the presidency, his intention is to run an unprecedented data-heavy campaign designed to operate as a shadow political party for the eventual Democratic nominee.

“That’ll get us through the first few months,” Kevin Sheekey, a top advisor to the former New York City mayor, told POLITICO when asked about the $500 million plan, which is just 1 percent of Bloomberg’s estimated net worth.

“Mike spent $100 million in his last New York City election. And you can do the math as you think more broadly but New York City is 3 percent of the national population,” Sheekey said. “I’m not suggesting it’s straight math. But I’m suggesting that when Mike Bloomberg is committed to making a difference and seeing something though, generally speaking he’s pretty unabashed in doing so.”

To that end, Bloomberg has assembled a political team that, since late November, has been meeting at least once weekly in the Manhattan headquarters of Bloomberg Philanthropies to consider what some aides have called “Plan A” and “Plan B.”

Plan A is straightforward: Bloomberg runs for president as a Democrat, not as an independent candidate as he had mused privately in the past. According to Plan B, Bloomberg uses all the data — ranging from meticulously researched profiles of voters to polling data on the top issues that move the electorate — and field staff to help the otherwise-outgunned Democratic Party nominee to end Trump’s presidency.

Bloomberg said Friday at an Orlando event that he’ll make a decision in “three more weeks.”

He also made clear that he’s not waiting on former Vice President Joe Biden, who’s also mulling a bid for president and who, Bloomberg advisors acknowledge, could draw from the same pool of moderate primary voters.

“My decision doesn’t depend on what other people are going to do,” Bloomberg told the AP. “My decision depends on whether or not I think I can make a difference.”

Still, the subject of Biden has come up in discussions with those who have discussed Bloomberg’s options with his team.

In those conversations, Democratic operatives say, Bloomberg’s team members have indicated that they’re polling and conducting focus groups, and are familiar with primary election calendar and the complicated politics of wringing delegates from various states. They’re also under no illusions about the difficulties of a Democratic Party newcomer running as a centrist in a progressive primary.

But Bloomberg’s aides are operating under the assumption that while the billionaire can’t buy the nomination, hundreds of millions of dollars can put him in contention.

“Five hundred million is just an obscene amount of money. It’s crazy, enough to buy up all the TV ad inventory in the seven or eight states that really matter in a primary,” said a Democratic consultant familiar with the plans who privately shared information from a conversation with a top Bloomberg advisor.

The consultant said it was unclear what Bloomberg would ultimately decide. But the mission would be similar either way.

“They’re going to do the infrastructure and logistical work to fill in the gaps for the state and national parties so that whoever the nominee is would inherit a state-of-the-art, fully functioning infrastructure,” the consultant said. “It’s being done with a clear and specific purpose: stopping Donald Trump.”

Bloomberg’s team knows the 76-year-old would need every penny to make his case to a Democratic electorate that’s shifting ever-leftward and that’s increasingly suspicious of billionaires and older white males.

Progressives also doubt his Democratic bonafides for having backed Republican candidates in the past, supporting the stop-and-frisk New York City policing policies that disproportionately targeted African-Americans and supporting gas and oil pipelines that leave some Democrats doubting his commitment to fight climate change — despite his commitment of $218 million to help cities reduce their carbon footprint while also financing the Sierra Club’s unprecedented Beyond Coal campaign that has shuttered 282 coal-fired electricity plants.

Though raised a Democrat, Bloomberg was elected to the first of his three New York mayoral terms as a Republican, became an independent in 2007 before he left office in 2013 and registered last year as a Democrat.

But if Bloomberg runs, his polling would likely show there’s a path for a centrist in a field of progressives, who presumably would cannibalize the progressive base. Surveys from Bloomberg’s longtime pollster, Doug Schoen, shows that 80 percent of Democratic primary voters respond positively to Bloomberg’s biography.

“When people learn about his involvement in climate change activism and gun safety, and when they learn that he’s not just a billionaire — but he came from a middle class background and his dad never earned more than $6,000 a year, and you talk about the work he’s done on the ground and his philanthropy — Dem primary voters view him favorably,” said one Democrat familiar with the polling.

With a net worth of $50 billion, Bloomberg contributed so much last year to charity — $767 million — that he was the nation’s second-biggest philanthropist behind Amazon founder Jeff Bezos. Bloomberg’s charitable causes also overlap top issues for the Democratic electorate, such as climate change and gun control.

His giving provides a ripe area for contrast: the Bloomberg Philanthropies’ compared to the Donald J. Trump Foundation. Bloomberg’s charity has given away and pledged at least $8.2 billion to actual charities. Trump’s foundation agreed last year to dissolve amid an investigation from New York’s attorney general, who said it was “functioning as little more than a checkbook to serve Mr. Trump’s business and political interests [and engaged in] a shocking pattern of illegality.”

In a primary, Bloomberg’s deep pockets would enable an extended run with adequate resources, said Sheekey, a longtime political adviser.

“The pressure for most people is two things: the need to raise money and the need to find the best and most-competitive staff,” he said. “Obviously the first is not a problem for Mike and since we started this process, we’ve put together a core staff that we’re very happy with that is committed to staying with Mike as long as he wants, partly because Mike has talked about, if he doesn’t run, going down a separate path and having the kind of impact on a larger scale than he did in the last midterm.”

Sheekey, who makes the case for Bloomberg for president better than Bloomberg himself, runs the weekly data-and-strategy meetings with Howard Wolfson, who oversaw Bloomberg’s political operation last year — when the former mayor contributed $110 million to 24 Democratic congressional candidates, 21 of whom won.

His top advisor at City Hall and the executive director of Bloomberg Philanthropies, Patti Harris, rounds out the inner circle’s troika.

A data-driven effort like the one the Bloomberg operation envisions, as first reported by the Atlantic, hearkens back to the roots of the billionaire’s wealth. A self-made man, he parlayed a small Wall Street fortune into a mammoth financial data and information services firm that branched out into a fully functioning media empire.

Yet Bloomberg has had what appears to be paralysis by analysis. He had planned to announce his decision on whether to run at the beginning of the month. But he needed more time and more numbers to decide by March — a date that’s still not set in stone.

“The data,” Sheekey said, “is a little more complicated than what he initially envisioned. And I think he also realized he’s not under any pressure to decide.”

Source: https://www.politico.com/story/2019/02/13/michael-bloomberg-trump-2020-1167159
Droolin’ Dog sniffed out this story and shared it with you.
The Article Was Written/Published By: mcaputo@politico.com (Marc Caputo)