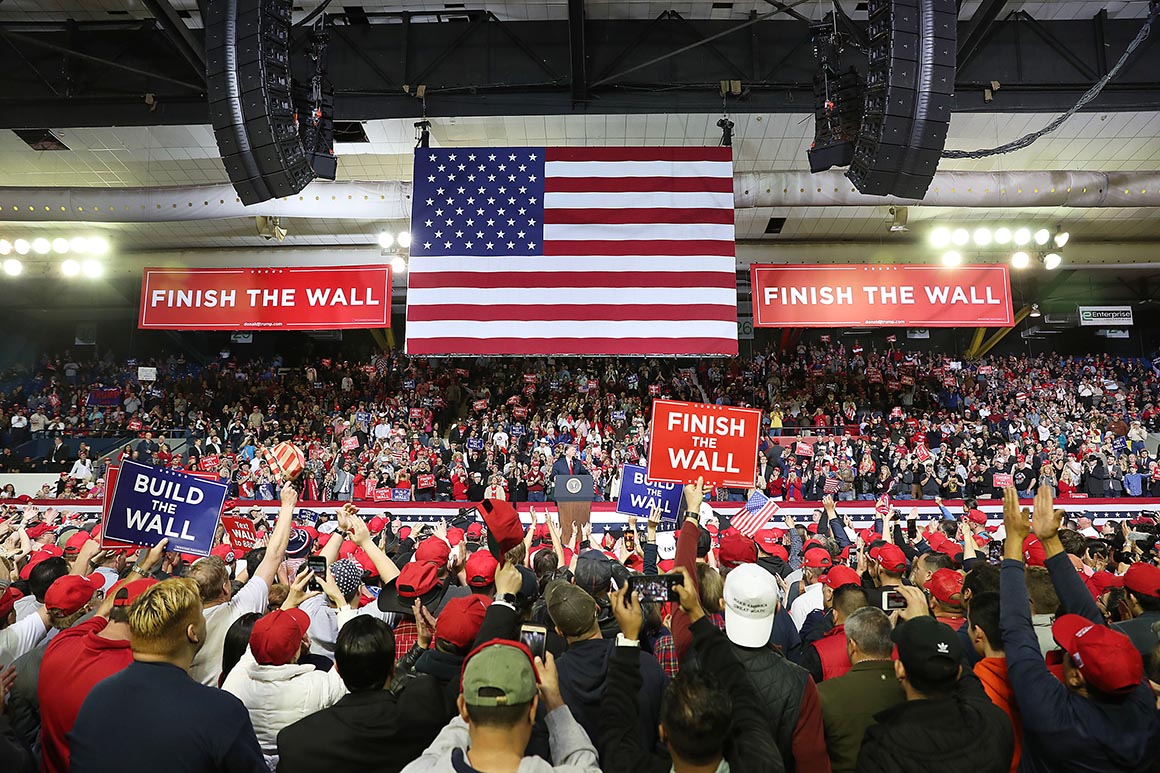 During his rally at the El Paso County Coliseum, Trump touted his base supporters, saying “there has never been anything like this in the history of our country.”

Fire public information officer Enrique Aguilar told the El Paso Times on Monday that Trump did not receive any special permission to exceed the limit and confirmed that there were 6,500 people inside the building during the president’s rally. The coliseum holds about 6,500 people. There were also thousands more watching Trump’s speech on big screens outside the facility.

Aguilar added that “it might be 10,000 with the people outside,” but said that the fire department didn’t specifically track the number of people outside of the coliseum, the El Paso Times reported.

Trump in the past has repeatedly inflated his crowd sizes, and has hit back at critics who have questioned the numbers.

The president also falsely claimed on Monday night that former Rep. Beto O’Rourke, who is considering a 2020 presidential run, only had a couple hundred people attend his counter-rally in El Paso.

“In fact, what I would do is say that may be the end of his presidential bid,” the president said of O’Rourke in regards to his crowd size. “But he did challenge us.”

Source: https://www.politico.com/story/2019/02/12/trump-el-paso-rally-crowd-1164730
Droolin’ Dog sniffed out this story and shared it with you.
The Article Was Written/Published By: rmorin@politico.com (Rebecca Morin)

WE CAN BE HEROES Trailer (Sharkboy & Lavagirl 2)

WE CAN BE HEROES Trailer (Sharkboy & Lavagirl 2) The NEW Movie Trailers you need to see ➜ https://www.youtube.com/playlist?list=PL3HDxuj_oceDEQGSpLLOqZjjy05MwFOSp © 2020 – Netflix Source: https://www.youtube.com/watch?v=zIi1TtZVw9k Indie Brew found this story and shared it with you. The Article Was Written/Published By: FRESH Movie Trailersv [...]

Madlib and Karriem Riggins conjure the spirit and sound of ’70s Spiritual Jazz. Read full story on the Bandcamp Daily. Source: https://daily.bandcamp.com/album-of-the-day/jahari-masamba-unit-pardon-my-french-review Indie Brew found this story and shared it with you. The Article Was Written/Published By: Marcus J. Moorev [...]

Read Ashley Bardhan’s review of the album. Source: https://pitchfork.com/reviews/albums/shygirl-alias-ep/ Indie Brew found this story and shared it with you. The Article Was Written/Published By: Ashley Bardhanv [...]