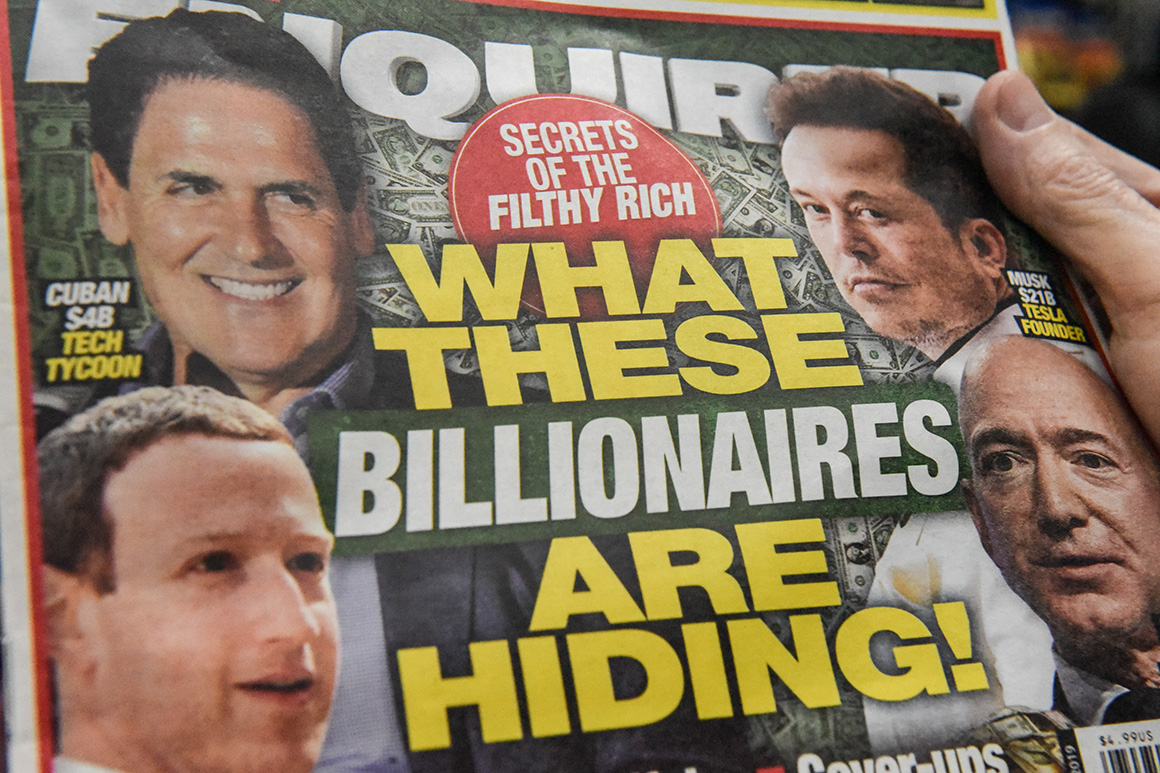 Diving deeply into the vat of scum and deceit that looks to my layman’s eyes like an attempt by the National Enquirer to blackmail Amazon founder Jeff Bezos, the most telling detail is not the alleged Bezos “dick pic” the supermarket tabloid’s editor and lawyer say they have obtained. Nor is it new love texts from Bezos to his mistress beyond the ones the Enquirer already published. Neither is it the other revealing photos of Bezos and his mistress they claim to possess. It’s not even the Enquirer’s explicit threat, spelled out in its lawyerly correspondence to Bezos and reproduced by him in a Thursday Medium post, to publish the photographic kompromat if he doesn’t do their bidding.

No, the most flabbergasting fact is that the Enquirer gang thinks Bezos is being mean to them! The tabloid and its executives want Bezos and his investigator, Gavin de Becker, who told the Daily Beast that political motives might be behind the Enquirer exposé, to stop soiling their reputations!

The notion that the Enquirer’s reputation could be damaged doesn’t go down easily, no matter how big a whiskey chaser you take with it. But that’s the position of Enquirer attorney Jon Fine takes in his letter to Bezos’ attorney. He claims Bezos and de Becker have defamed the Enquirer’s parent company, American Media, by expressing their views that the Enquirer’s January exposé of Bezos’ love affair was “politically motivated.” To the contrary, writes Fine, “Simply put, this was and is a news story.”

To remedy the alleged defamation, Fine proposed this confidential arrangement: In return for the Enquirer not publishing the pictures, Bezos and de Becker must publicly affirm “that they have no knowledge or basis for suggesting that [the Enquirer’s] coverage was politically motivated or influenced by political forces” and will stop referring to such a possibility. Apparently, you can call them sleazy all you want, but suggest that they’re political and you’ve got a fight on your hands.

Bezos bravely called the Enquirer’s bluff, refusing to mouth the “lie” the tab typed out for him.

Why is the Enquirer suddenly so defensive about its reputation? This is the publication that has published as fact, among other things, the loopy fictions that presidential candidate Hillary Clinton was hooked on pills, crazed, diseased, near death, a traitor, and a member of a crime family.

Even if you agree with me that even a serial defamer has the right to assert his rights when defamed, the Enquirer complaint still rings hollow. In one letter, the Enquirer lawyer grouses about the continued investigative coverage in the Bezos-owned Washington Post on the origin of the Enquirer’s scoop, calling it part of the tycoon’s continued dissemination of “false and spurious” allegations about the publication and its executives. This is hypocritical positioning for a tabloid that waves the First Amendment every time its critics scold it for publishing scandalous and flimsily sourced exposés.

All the Enquirer’s shrieking about defamation invites the speculation that de Becker and Post reporters might be closing in on evidence that its Bezos exposé was (in part or whole) politically motivated. Donald Trump used Twitter, speeches, and his power over the postal system to punish Bezos, probably because the mogul’s Washington Post routinely scorches him with critical stories. “Believe me, if I become president, oh, do they have problems,” Trump said at a campaign rally in April 2016. “They’re going to have such problems.” Trump is “eroding our democracy,” Bezos countered that October. And don’t forget the schadenfreude of Trump’s Jan. 13 tweet: “So sorry to hear the news about Jeff Bozo being taken down by a competitor whose reporting, I understand, is far more accurate than the reporting in his lobbyist newspaper, the Amazon Washington Post. Hopefully the paper will soon be placed in better & more responsible hands!”

The Enquirer has long played the role of Trump’s paladin. It has long protected Trump, even fluffing his candidacy with an endorsement in the 2016 race. During the final months of the campaign, the tab bought and spiked an exclusive about Trump’s 10-month-long affair with a Playboy centerfold model Karen McDougal in a practice known in the tabloid industry as “catch and kill.” According to The Associated Press, the measure wasn’t a one-off. Leading up to the 2016 election the Enquirer kept in a safe a stash of damaging Trump stories that it never published.

Could it be that Bezos investigators or his newspaper are about to show that Trump and his associates assigned the tab to probe his private life—or helped it obtain the salacious pictures—and that they’re about to show how the exposé was accomplished? One major hint that Bezos’ people might think the Enquirer used electronic surveillance in obtaining the pictures appears in the Enquirer lawyer’s pitch for a resolution of his company’s complaint: He affirms that American Media “undertook no electronic eavesdropping.” I had no suspicions that the Enquirer might have hacked Bezos until its lawyer brought up the topic.

Bezos teases the Enquirer and its executives in the sections of the Medium post in which he discusses America Media CEO David Pecker and the company’s closeness to the Saudi government, for which it has done work. He briskly notes that Pecker and the company have been “investigated for various actions they’ve taken on behalf of the Saudi Government.” Then he quotes from a New York Times story about how President Trump rewarded Pecker’s loyalty “with a White House dinner to which the media executive brought a guest with important ties to the royals in Saudi Arabia. At the time, Mr. Pecker was pursuing business there while also hunting for financing for acquisitions …”

Having stuck the Saudi scimitar in, Bezos twists it a few paragraphs later, writing, “Several days ago, an AMI leader advised us that Mr. Pecker is ‘apoplectic’ about our investigation. For reasons still to be better understood, the Saudi angle seems to hit a particularly sensitive nerve.”

Must we wait for a Kindle Single by Bezos or a future Washington Post to figure out exactly what he’s talking about? Former Enquirer senior editor Jerry George told CNBC on Friday he thinks the tabloid published the Bezos story in hopes of returning to Trump’s good graces after falling out last year by cooperating with prosecutors in the McDougal case.

That’s likely the case, but could Bezos also be saying the Saudis participated in collecting the kompromat or that they are otherwise connected to the exposé?! The Saudis probably have less affection for Bezos than Trump, given their recent history. Bezos’ Washington Post made a columnist of Saudi dissident Jamal Khashoggi. After the Saudis killed Khashoggi, the Post extended saturation coverage of the murder in its news and opinion pages, even running house ads commemorating his life and martyrdom. Could it be that the Saudis teamed up with Trump and the National Enquirer to embarrass and silence Bezos? On paper it makes sense. In real life, could the three parties really be that crazy?

The biggest mistake the Enquirer made was trying to bully somebody who, by dint of his power and pride, couldn’t be bullied. But the Enquirer’s second and more lasting mistake was telling the owner of one of the world’s most influential newspapers what not to cover. Now that Bezos has revealed that demand, the entire fourth estate is chasing that story and won’t stop until they get it.

Don’t send pictures to Shafer.Politico@gmail.com, this is a family-friendly column. My email alerts are put off by the smut of this scandal. My Twitter has moved to Saudi Arabia. My RSS feed misses Ed Anger and the Weekly World News.

Source: https://www.politico.com/magazine/story/2019/02/08/jeff-bezos-national-enquirer-224933
Droolin’ Dog sniffed out this story and shared it with you.
The Article Was Written/Published By: jshafer@politico.com (Jack Shafer)