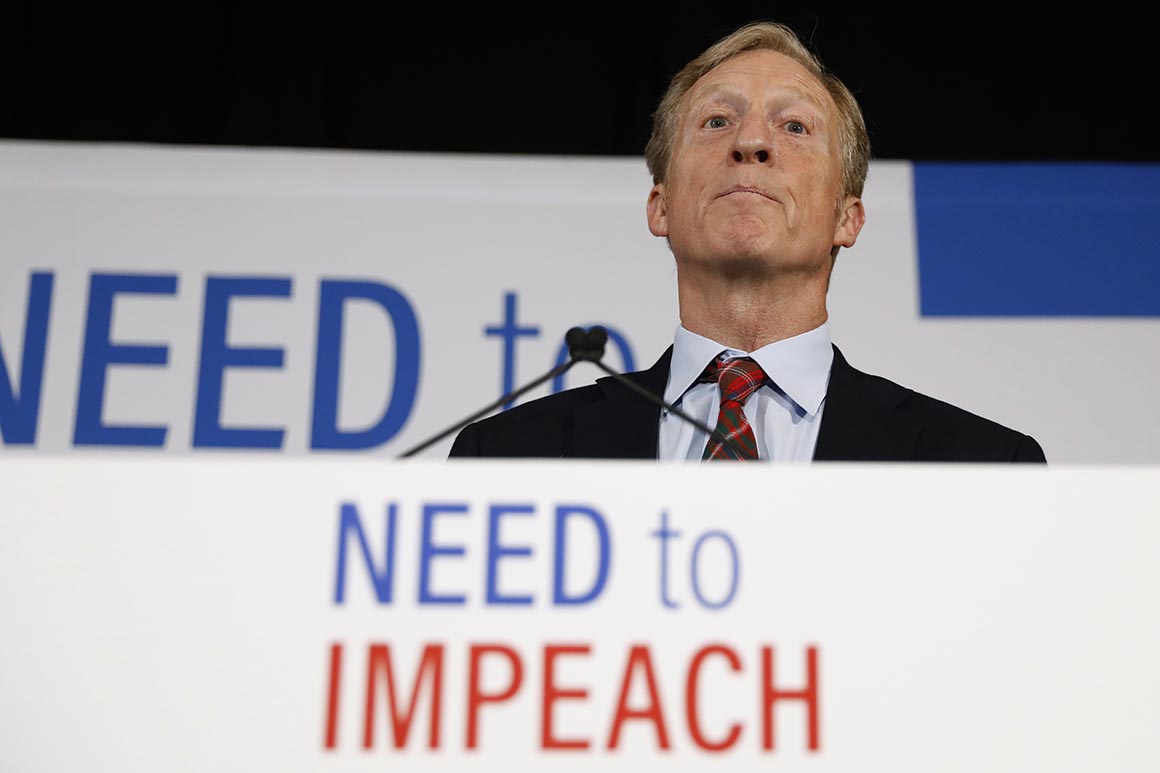 Billionaire Tom Steyer is cranking up pressure on key House Democrats to impeach President Donald Trump where he thinks they’ll feel it most — back in their home districts.

Steyer’s first targets are three powerful committee chairmen, Richard Neal (D-Mass.), Jerry Nadler (D-N.Y.) and Elijah Cummings (D-Md.). But the liberal megadonor isn’t stopping there: He will soon turn his attention to rank-and-file members seated on the committees that would be involved in impeachment proceedings, including freshmen.

The previously unreported plans to single out additional members on the Ways and Means, Judiciary and Oversight Committees, detailed by Steyer and his advisers, represent the latest turn in Steyer’s multimillion-dollar campaign to impeach Trump. And the thinly veiled threat against the Democratic upper brass puts the former hedge fund manager turned activist squarely at odds with leaders of the party.

Kevin Mack, Steyer’s lead strategist on Need to Impeach, said the PAC has virtually unlimited resources to spend in targeted districts. The group has committed $40 million to the campaign for 2019 so far. The offensive includes TV and digital ad buys, paid staff in key districts and volunteers to organize canvassing.

“We haven’t ruled out going into leadership districts,” said Mack. “Why does Steny Hoyer get a pass, why does Jim Clyburn get a pass? They’re all hiding behind the Mueller report.”

Though Mack said the PAC isn’t ready to back primary challengers against Democrats, that’s not being ruled out, either.

Steyer’s frustration with Democrats’ hesitancy to impeach Trump is palpable. But Steyer believes that veteran lawmakers like Neal, Nadler and Cummings will listen to their constituents if Need to Impeach gives voters a loud enough bullhorn.

Steyer, at least publicly, has no official timeline for the next steps his PAC might take if Democrats don’t make move aggressively to obtain Trump’s tax returns or begin building a credible impeachment case against the president. He simply said he will continue to place negative ad buys in districts like Neal’s and Nadler’s, informing their constituents where their representative stands on impeachment.

“We’re not saying, ‘We’re so brilliant, listen to us,’ we’re saying, ‘Listen to your constituents,’” Steyer said. “It’s not like we can just hold our breath until something happens.”

There’s little incentive for Neal, Nadler and Cummings to oblige. They are in safe blue districts and have warned that the political cost of launching impeachment proceedings against Trump before special counsel Robert Mueller’s findings are known could be high for newly empowered House Democrats. Nadler, who chairs the Judiciary Committee, has repeatedly said Democrats need to “wait and see” on impeachment.

Cummings, who shortly after the election unveiled a laundry list of investigations his Oversight Committee will conduct, scoffed at the idea that Steyer’s campaign could change his mind.

“He ought to spend his money on something else,” said Cummings. “I’m going to run my committee with integrity, transparency and accountability.”

“I was mayor of a big city,” Neal, the Ways and Means chairman and former mayor of Springfield, Mass., quipped. “No, it doesn’t bother me, no.”

Need to Impeach chose Neal for its first campaign targeting a congressional district. The effort, which started this week, includes paid staff and a $109,000, two-week television ad buy in the relatively small Springfield market. The group says it will soon add another $100,000 in digital ad buys.

“It’s time to hold Donald Trump accountable, and we can do our part here in Massachusetts. All we need is our Congressman Richard Neal to be with us,” the TV spot says. “Neal can subpoena Trump’s tax returns and vote to start impeachment hearings against the most lawless and corrupt president in American history.”

Neal’s position remains unchanged: He wants to wait until Mueller’s investigation into Russian meddling and potential collusion with the Trump campaign is finished. Neal is consulting the counsel of the House of Representatives and the Joint Committee on Taxation to determine the appropriate legal steps to move forward with the “unprecedented request” for Trump’s tax returns, the congressman’s spokesman William Tranghese said.

“There’s a discernible process that’s acknowledged and at the moment I think my position is consistent with the party leadership on the Democratic side,” Neal said.

Steyer said he’s spoken with Democratic leaders and has “some sense of where they stand,” though he wouldn’t disclose details of his conversations. The campaigns targeting Nadler and Cummings will start shortly after Steyer’s Feb. 12 town hall in Springfield. Steyer will hold town halls in both Nadler and Cummings’ districts.

Need to Impeach will also have a presence in the districts represented by Intelligence Committee Chair Adam Schiff (D-Calif.) and Financial Services Chair Maxine Waters. But the campaign in Waters’ district is designed to boost the California Democrat. Waters was an early supporter of impeachment and demanding Trump’s tax returns.

But more than a year into Steyer’s multimillion-dollar impeachment push, Democrats aren’t changing their calculus.

“I hear people say, ‘Why didn’t they do it the first day,'” Pelosi told POLITICO this week, referring to impeachment proceedings. “You have to do it right.”

She added: “You have to protect the prerogatives of the House of Representatives and you cannot be scattershot about that.”

Steyer lives in Pelosi’s congressional district and the two have “been friends for many years,” Pelosi said. But “why don’t we keep our focus on the Republicans?” she asked.

“Wait a minute, let me get this straight; a billionaire from California is coming into the district to spend money against Richie, who used to be the mayor of Springfield, and is now the chairman of the Ways and Means committee who is making us very proud of Massachusetts,” Pelosi said.

Heather Caygle and John Bresnahan contributed to this report..

Source: https://www.politico.com/story/2019/02/07/trump-impeachment-tom-steyer-house-democrats-1157592
Droolin’ Dog sniffed out this story and shared it with you.
The Article Was Written/Published By: smurray@politico.com (Stephanie Murray)